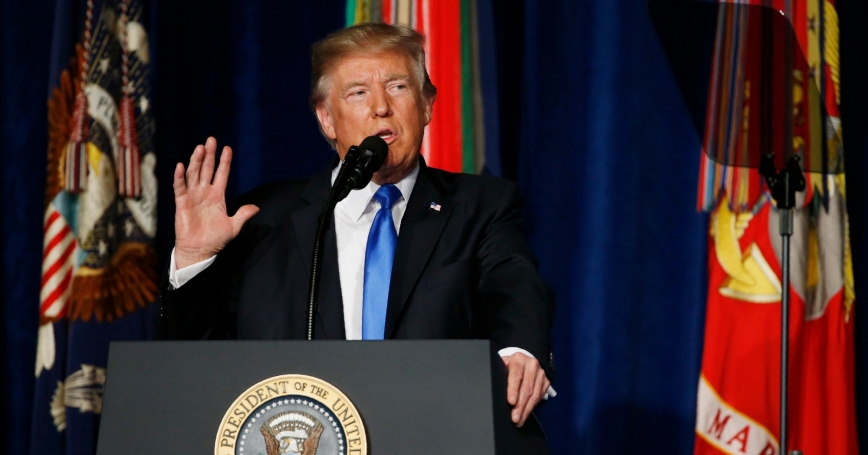 President Trump addressed the nation on Afghanistan in terms that were distinctly his own, but with a core message very much in the mainstream of American national security policy, one Hillary Clinton might well have issued had last year's election gone differently.

The president opened with a characteristic bit of hyperbole, asserting that the courage of American military heroes “is unmatched in human history.” Other presidents might have been content to assert that American courage was unsurpassed, rather than unmatched, but the sentiment is otherwise standard fare.

The president talked about winning and offered a “plan for victory.” But victory was defined as not losing, that is to say, not allowing the Taliban to win.

The president insisted that his administration would not engage in nation-building, but also promised that the United States would continue to provide military and economic aid to the Afghan government. Obama also rejected nation-building in name but not in practice.

The president said, “We will not dictate to the Afghan people how to live or how to govern their own complex society.” But he also insisted that the American people “expect to see real reforms” and implicitly conditioned continued American aid on such reforms.

President Trump's Afghan strategy did differ from that of his predecessor in several key respects.

President Trump's Afghan strategy did differ from that of his predecessor in several key respects.

First, he said that the American commitment in Afghanistan would be condition-based, rather than time-based. This is pretty much the same place Obama ended up, but only after years of repeated although sometimes extended withdrawal deadlines. Trump did define his conditions as obliterating ISIS, crushing al Qaeda and preventing a Taliban victory.

The last point was more than Obama was willing to sign on for. In fact, back in 2014, he declared American combat operations over and excluded the Taliban from future targeting.

Trump also took a much harsher line than his predecessors on Pakistan and made a more explicit threat to draw India more heavily into Afghanistan to counterbalance malign Pakistani influence. Whether this will lead Pakistan to draw back or double down on its support for the Taliban remains to be seen, but the president's tougher line is reflective of the long mounting frustration with Pakistani behavior throughout the American national security establishment.

The president promised less micro-management of the war from Washington. This too is a departure from Obama's practice and one on which Trump seems likely to deliver.

In sum, the president has embraced a national security establishment strategy for Afghanistan with a veneer of Trumpian flourishes that do not alter its essence. The result is likely to disappoint some of his core supporters and to be criticized by his Democratic opponents, but it will also secure a measure of bipartisan support. On this issue and in this address at least, President Trump seems to be governing from the center.

This commentary originally appeared on The Hill on August 22, 2017. Commentary gives RAND researchers a platform to convey insights based on their professional expertise and often on their peer-reviewed research and analysis.