How ISIS Is Transforming 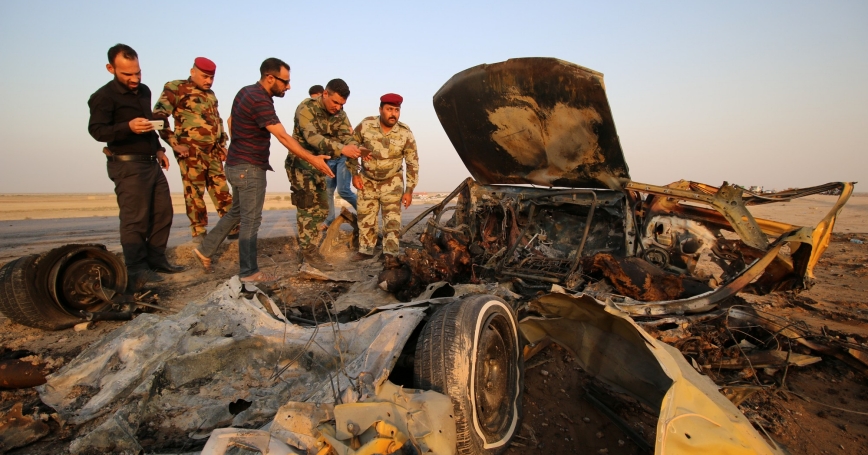 Iraqi security forces inspect the site of a bomb attack at a police checkpoint on a highway near the southern Iraqi city of Nassiriya, Iraq, September 14, 2017

A little more than three years after the Islamic State (or ISIS) stormed onto the world stage by violently capturing large swaths of territory throughout Iraq and Syria, the campaign to counter the group has made significant progress. But predictions of the group's ultimate demise are premature. What the world is witnessing is the transition, and in many ways degeneration, from an insurgent organization with a fixed headquarters to a clandestine terrorist network dispersed throughout the region and the globe.

From Regional to Global

Iraqi security forces have ejected ISIS fighters from key cities they once controlled, including Fallujah, Ramadi, Tal Afar, and most recently Mosul, which served as an important base of operations for the insurgents over the past three-and-a-half years. Across the border in Syria, the U.S.-backed Syrian Democratic Forces claim to have retaken nearly 80 percent of Raqqa, ISIS' overall headquarters and the heart of its so-called caliphate. In recent weeks, Russian military and forces loyal to the regime of President Bashar al-Assad have been fighting to seize Deir Ezzor, a longtime ISIS stronghold in Syria. Its strategic location close to the Iraqi border has been used as a logistical hub to smuggle reinforcements to the insurgents.

There is little doubt that the patchwork of forces arrayed against ISIS currently possesses the momentum. U.S. airstrikes consistently obliterate ISIS targets, which include groups of fighters holed up in entrenched fighting positions with few options for escape. According to U.S. Brigadier General Andrew Croft, ISIS leadership is “more fractured, less robust, flimsy and sporadic” at this point in the fight. There are also reports of dissent and infighting within the ranks and low morale plaguing the organization as the failure of its state-building project is laid bare for all to see.

ISIS is being forced to change its strategy and tactics, but it has been proactively preparing for the next phase of the conflict. In short, it is transitioning from an insurgent organization to a terrorist group. Insurgent organizations hold and seize territory, can exercise sovereignty over a population, operate in the open as armed units, and can engage in mass mobilization. Terrorists can do none of these things. Rather, terrorists conduct attacks with members operating in small cells and rarely hold territory—if they do, it is for a very short period of time.

The result of this transition is that ISIS-perpetrated violence should be far less concentrated and more dispersed.

The result of this transition is that ISIS-perpetrated violence should be far less concentrated and more dispersed. The group will continue to operate underground in the desert areas of eastern Syria and western Iraq for the foreseeable future, relying upon classic guerilla tactics such as sniping, ambushes, hit and run attacks, car bombs, and assassinations.

The sustained extirpation of ISIS from the region can probably only be achieved in tandem with competent local security forces, including police and militaries capable of operating among the predominantly Sunni enclaves in Iraq and Syria. These types of units are completely absent in Iraq; where they exist in Syria—for example the popular mobilization units (PMUs)—they are too often sectarian in nature, and therefore barely effective in the short term and counterproductive in the long term. Recent polling data from Iraq suggests that 22 percent of Iraqi Sunni Arabs do not trust that the government will treat them as it does Arab Shiites, a pessimistic start for the future of sectarian relations and potentially fertile ground for ISIS influence to take hold going forward.

The transition from insurgency to terrorism will lead ISIS to shift resources to bolster existing franchises in Afghanistan, Libya, Yemen, and the Sinai Peninsula in Egypt. It will simultaneously also seek to gain entry into other failed states and ungoverned territories sympathetic to its Salafi-jihadist ideology, from the North Caucasus to Southeast Asia.

A year after losing the town of Sirte, in Libya, ISIS fighters have regrouped in smaller clandestine cells throughout the country, from Sabrati and Ben Walid in the north, to Ubari and Ghat further south. And although al Qaeda in the Arabian Peninsula is the greater threat to stability, ISIS seems intent on establishing a presence (PDF) in the country—which it has deemed an essential front in its global campaign—particularly given its location bordering Saudi Arabia. In addition to establishing a caliphate, ISIS ultimately wants to usurp what it sees as a corrupt and apostate regime in Riyadh and supplant the House of Saud with its own adherents, which it believes are the right and proper guardians of two of the holiest sites in Sunni Islam.

In Afghanistan, ISIS has grown its network substantially over the past year and claimed responsibility for a number of highly lethal sectarian attacks, including a suicide attack against a Shiite mosque in Kabul in late August. Its terrorist activities are also increasing in the northern part of Egypt's Sinai Peninsula, despite the billions of dollars the United States has given to the government of President Abdel Fattah el-Sisi for counterterrorism. In mid-September, 18 policemen were killed by an ISIS car bomb attack in the Sinai. The group has even made inroads further afield in Southeast Asia, where forces loyal to ISIS have fought a bloody campaign against the Filipino security forces in Marawi and ISIS recruiting centers have sprung up in Islamic boarding schools in Indonesia.

Part of the revised ISIS strategy will likely include a rejuvenated focus on planning and conducting spectacular attacks in the West, part of an effort to garner attention and prove that the group is, if anything, resilient in the face of suppression. Toward this end, ISIS may rely heavily on Turkey as a logistics hub, using the country's geographic proximity to Europe as a conduit for militants attempting to infiltrate the continent. This past May and August, the number of terrorist attacks by ISIS in Europe reached double digits (PDF), even as the group lost more territory—perhaps further proof that the group is embracing the transition from insurgency to terrorism.

ISIS will likely continue to use encrypted communications to direct terrorist attacks abroad, even as it morphs into a less centralized entity. This virtual element will likely assume even greater significance, as the group exhorts its followers around the world to commit acts of violence in its name until the caliphate can be restored at some yet-to-be-determined future date. Governments must respond with a comprehensive counterterrorism strategy that involves a mixture of policy initiatives, from increased information sharing between intelligence and security agencies to well-funded and well-staffed programs focused on countering violent extremism.

As terrorism scholars Charlie Winter and Haroro Ingram recently pointed out, ISIS has also grown adept at branding its failures as successes. Its narrative of the September 15 Parsons Green attack in London, for example, was not that the Tube bomb failed to kill any commuters that morning, but instead that the group was capable of striking the United Kingdom for the fourth time in six months. The West has failed miserably in the battle of the narrative, consistently allowing ISIS and other terrorist groups to seize the initiative in promoting their propaganda. Western governments need to devote significantly more resources to strategic communications and information operations aimed at blunting the impact of terrorist messaging.

Recognizing ISIS's transition from insurgent organization to terrorist network is critical to crafting the right strategy and allocating the proper resources necessary to fight for its ultimate defeat. Just as insurgency and terrorism are not the same, the objectives of counterinsurgency and counterterrorism are different, too. Nuanced approaches to fighting highly adaptive adversaries require a different mix of tools—military, police, diplomatic, economic—to effectively counter the Islamic State's protean campaign of violence.

This commentary originally appeared on Foreign Affairs on September 25, 2017. Commentary gives RAND researchers a platform to convey insights based on their professional expertise and often on their peer-reviewed research and analysis.