King Salman and Putin Deals Leave the U.S. Out in the Cold 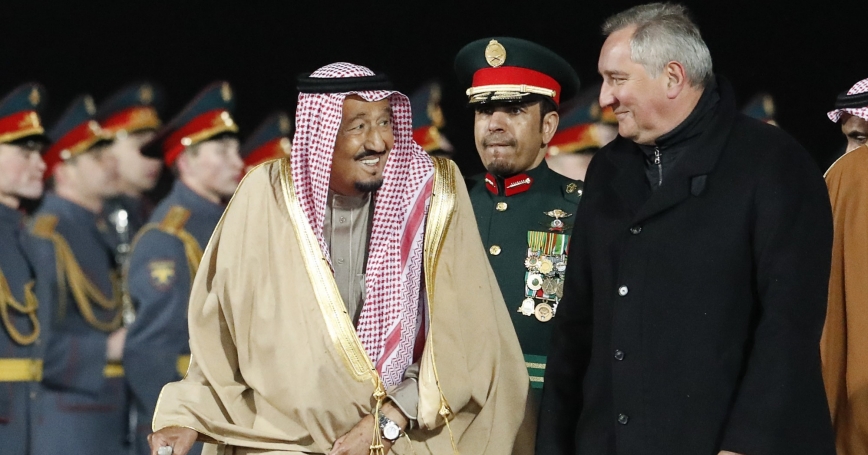 King Salman of Saudi Arabia will meet with Russian President Vladimir Putin this week during the first official visit of a Saudi King to Russia.

This visit marks a turn in Russia-Saudi relations: the two countries have not seen eye-to-eye on the future of Syria, and the U.S.-aligned Riyadh views Russia's relationship with Iran as an unholy alliance.

While their agenda is no doubt filled with pressing political topics, it is the economic deals they will sign that really matter.

These deals reflect a broader strategy of engagement in the Middle East: Russia uses economics as a vehicle to deepen political relationships and shore up Moscow's flagging bottom line, all with the added bonus of undercutting the U.S., and the Russian playbook for Saudi Arabia is no different.

Countries that may be unsatisfied with U.S. leadership have choices regarding their economic, political, and military partnerships.

This engagement also sends a message to the United States. International relations are fluid, and countries that may be unsatisfied with U.S. leadership have choices regarding their economic, political, and military partnerships.

Under sanctions, Moscow has diversified its pool of foreign investment beyond Europe and the United States. Russia has found willing partners in the Gulf states, able to make high-value investments in the struggling Russian economy.

Saudi Arabia, in particular, has committed more than $10 billion for investment in Russia in infrastructure, retail, logistics, and agriculture through its sovereign wealth fund and other investment vehicles.

Faced with declining oil revenues on which their national budgets depend, Russia and Saudi Arabia have cooperated in the energy sector, notably cutting oil production in December 2016 to stabilize oil prices. This was the first time since 2001 that members of the Organization of Petroleum Exporting Countries (OPEC) — of which Saudi Arabia is the largest exporter — and non-OPEC countries — of which Russia is the largest exporter — agreed on output goals.

Now, Riyadh is planning to invest in Russian energy assets.

Saudi Arabia has also flirted with purchasing Russian arms, although earlier sales have failed to materialize. Predominantly equipped by the U.S. and UK, Riyadh reportedly signed a preliminary military cooperation agreement valued at $3.5 billion with Russia.

At first blush, Moscow appears to gain disproportionately from these deals. But these agreements fit squarely in Saudi Arabia's push for economic development and modernization as part of its Vision 2030 program.

Riyadh's investment in the Russian energy sector will also lead to greater Russian activity in Saudi Arabia itself, including supplying gas to the Saudi petrochemical industry and working directly in the country to lower drilling and production costs. This will also help with an important Vision 2030 goal: opening up new jobs for Saudi nationals.

Similarly, Russian arms deals are more than just a means of hedging against potential trouble with the U.S., Saudi Arabia's traditional security guarantor. The deals with Russia will come with local service provisions, leading to the manufacture of arms in the kingdom and likely the transfer of military technology to Riyadh, allowing the Saudis to build a local military industry — a stated goal of Vision 2030.

The investment agreements thwart the U.S.- and EU-led sanctions regime, and Russian rapprochement with Saudi Arabia, a critical U.S. partner in the region, intentionally needles Washington.

While Russia is not the only actor with influence — Saudi Arabia perhaps holds an outsized degree of leverage in the relationship — it is enough to complicate U.S. policy in the region, whether through OPEC or in Syria.

Russia's economic activity in the region provides an important signal to the U.S. As the architect of the global economic system, the U.S. made that system compelling enough so that most other countries signed on to honor the institutional rules because they too would benefit economically.

But such cooperation is not ordained, and countries like Saudi Arabia have choices, whether it is to partner with Russia or to throw themselves behind China's Belt and Road Initiative — or to hedge and seek a diversity of partners.

The Russian economic interactions in the Middle East are more subtle than that country's overt military intervention in Syria, but their effect may be equally costly to U.S. interests and complicating to U.S. policy goals in the long-term.

This commentary originally appeared on Newsweek on October 4, 2017. Commentary gives RAND researchers a platform to convey insights based on their professional expertise and often on their peer-reviewed research and analysis.