The Moderate Face of Al Qaeda 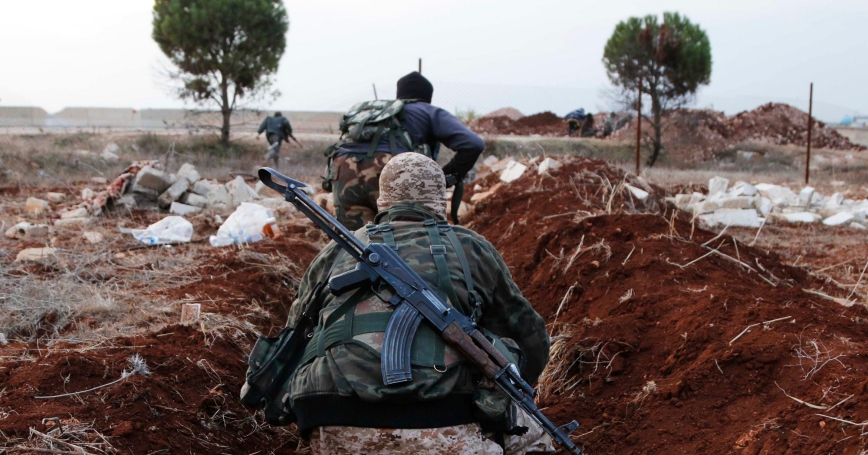 Throughout 2016, al Qaeda's Syrian affiliate underwent a series of rebrandings—from Jabhat al-Nusra to Jabhat Fateh al-Sham to Hayat Tahrir al-Sham—all in an attempt to present itself as a moderate alternative to more extreme groups operating in Syria, including the Islamic State (ISIS).

And although the rebranding was regarded as a bald-faced feint by many counterterrorism scholars, it just might have worked to recast al Qaeda's image within Syria. Al Qaeda in Syria's carefully calculated decision to distance itself from its parent organization was an effort to portray itself as a legitimate, capable, and independent force in the ongoing Syrian civil war. Another objective was to prove that the militants were dedicated to helping Syrians prevail in their struggle. Finally, it would give al Qaeda central a modicum of plausible deniability as it paves the way for its erstwhile allies to gain eligibility for military aid from a collection of external nations.

Al Qaeda in Syria's shift was not lost on Syrian Sunnis desperate to topple the brutal dictator Bashar al-Assad. Now that ISIS has lost its capital in Raqqa, al Qaeda may be the only group viewed as militarily capable of challenging the Assad regime's grip on power. And unlike ISIS, al Qaeda is perceived as working with locals and possessing the resources necessary to provide the trappings of governance.

It remains unthinkable to most that the term “moderate” could ever be applied to an affiliate of the group responsible for the attacks of September 11, 2001. But al Qaeda's Syrian franchise has quietly emerged as the less extreme alternative to ISIS within the jihadist universe. And that could spell a situation, at least in the long term, in which al Qaeda begins to resemble the Lebanese group Hezbollah—a violent non-state actor that has solidified political legitimacy while still retaining its ability to wage large-scale acts of terrorism and political violence.

One of al Qaeda's first steps in presenting itself as more evenhanded was to denounce blatant sectarianism and work to convince one of its main franchise groups, al Qaeda in Iraq (AQI), to jettison sectarianism as a guiding principle. In what has become an infamous incident, in July 2005, al Qaeda's future leader Ayman al-Zawahiri penned a letter to the leader of AQI, Abu Musab al-Zarqawi, chastising him for his group's wanton slaughter of Shiites. Zawahiri stressed the harm that Zarqawi's approach was having on the overall al Qaeda brand and urged him to eschew targeting other Muslims. Zarqawi essentially ignored Zawahiri's advice, cementing AQI's reputation as a ruthless and sectarian organization where violence was almost an end in and of itself.

Al Qaeda has demonstrated a knack for pragmatism when operating in the midst of civil wars.

Al Qaeda has also demonstrated a knack for pragmatism when operating in the midst of other countries' civil wars, and Syria is no exception. As it has done in Yemen, Mali, and elsewhere, al Qaeda has functioned in an almost parasitic manner. After infiltrating the ranks of local rebel groups, al Qaeda fighters parrot their grievances and champion their parochial objectives. After its fighters ingratiate themselves with the extant networks of insurgents, al Qaeda ramps up proselytization efforts and introduces a narrative that mixes local issues with that of the global jihad.

Al Qaeda is also willing to work with other groups, as it has been doing in Syria, where it typically puts locals in charge of areas it governs, while cooperating with the opposition or even relegating its fighters to less important positions within opposition hierarchies. Al Qaeda's penchant for cooperation has extended beyond active conflict zones as well, as evidenced by on-again, off-again tactical cooperation with Iran.

It has, meanwhile, managed to boost its brand through the provision of local services, including water and electricity, while also working to support local bakeries and control market prices of basic foodstuffs. The group has even publicly announced that it will refrain from attacking the West (even if the pause is temporary) to avoid American counterterrorism efforts and to help concentrate its finite resources on overthrowing the Assad regime, the top priority of Syria's Sunnis.

For the moment, the “near-enemy versus far-enemy” debate seems settled. Although al Qaeda, considered broadly, will remain a global organization, it has recognized that it is infinitely more successful when it focuses on local issues instead of a more amorphous and contested struggle with the West.

For all of al Qaeda's attempts at moderation, ISIS has pursued an uncompromising strategy of sectarianism, barbarity, and conquest.

ISIS fully embraced sectarianism, seemingly making the killing of Shiites its raison d'etre. Labeled as apostates, Shiites and other so-called non-believers were targeted with extreme methods of murder, from mass executions to public beheadings, rape, and symbolic crucifixions. Al Qaeda's propaganda might still be peppered with derogatory references to Shiites, but in general, it favors a much more measured approach than ISIS.

Rather than working with local groups, meanwhile, ISIS consistently acted as a conquering army, overtaking local militant leaders rather than working alongside, with, or through them. Locals were taxed, extorted, and closely policed by ISIS religious patrols to ensure strict adherence to sharia law.

ISIS's approach to warfare was reflected in its fighting style, where the group relied on conventional means of warfare, including artillery and tanks, in combination with some asymmetric tactics such as vehicle-borne improvised explosive devices. When ISIS assumed control of a certain swath of territory, it often installed foreigners—Chechens, Tunisians, and Uzbeks—to take command.

As a result of its military doctrine, ISIS has borne the brunt of counterterrorism operations from the United States and its allies. The relentless stream of ISIS propaganda directed at the West left the U.S.-led coalition with little choice but to set its sights on dismantling the caliphate, leaving al Qaeda in Syria free to patiently rebuild its credibility and political legitimacy among local Syrians.

The future of al Qaeda and ISIS will be largely defined by the competition between the two. ISIS has laid claim to leading the global jihadist movement for the past three years, but its current decline may very well be accompanied by an ascendant al Qaeda. In Syria's Idlib province, al Qaeda has successfully cultivated grassroots support and is now accepting former ISIS fighters into its ranks, a clear sign that its strategy of patience and parsimony is bearing fruit. Al Qaeda's leadership realizes that the group's response to the Arab Spring was sclerotic and is now making amends, focusing its resources and energy on the concerns most salient to Syrian Sunnis, a strategy that has helped al Qaeda spread its roots throughout the northwestern part of the country.

The ongoing struggle will determine the control of territory, ability to recruit from essentially the same pool of jihadists, and perhaps above all else, influence. Al Qaeda's more balanced and predictable approach to governing is geared toward winning popular support. Where ISIS murders apostates, al Qaeda is indifferent. Where ISIS seeks to enforce draconian religious standards, al Qaeda is less stringent.

For all of the criticism he endures for lacking charisma, Zawahiri does give al Qaeda the benefit of continuity and a historical appreciation for what has traditionally worked and what has failed in the jihadists' ongoing struggle against their adversaries. The group has made course corrections based on trial and error and actively sought to amend previous errors in doctrine and strategy.

Next year, 2018, will mark the 30-year anniversary of al Qaeda's founding. Its ability to establish widespread political legitimacy through a refurbished image could very well propel the group through its third decade and beyond.

This commentary originally appeared on Foreign Affairs on October 24, 2017. Commentary gives RAND researchers a platform to convey insights based on their professional expertise and often on their peer-reviewed research and analysis.