Drones Could Deliver Change to Africa 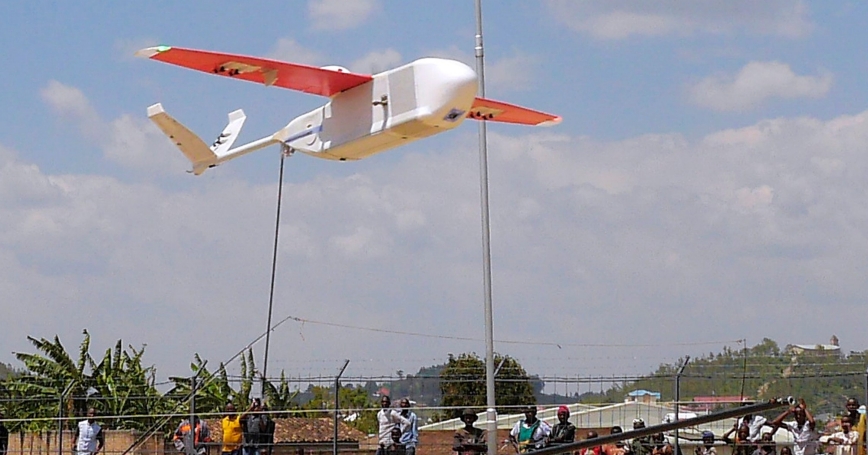 A drone takes off from an operations center in Muhanda, Rwanda, on its way to deliver blood supplies to remote hospitals, October 12, 2016

The Africa 2017 conference is scheduled for the beginning of December and promises to connect policymakers, investors and entrepreneurs around technologies that could help accelerate the development of commercial markets and services on the continent. One technology that will likely be at the center of discussions is the promise and utility of autonomous flying vehicles, or “drones.”

Drones aren't just useful for deliveries and high-end photography missions, or as surveillance devices or weaponized tools for the military. Less well-known is their potential in the emerging world, especially on the African continent, to transform urban and rural infrastructure and enhance agricultural productivity.

In order to build a comprehensive understanding of drones, their utility and regulatory concerns, a team of RAND researchers traced the deployment of drones from “last-mile logistics” (Amazon, Google, United Parcel Service deliveries to the home/office) in Europe and the United States and detailed their uses within the sharing economy, smart cities and the Internet of Things. The work highlighted the emerging role of drones in facilitating remote medical operations to first responders and assisting African nations seeking to address infrastructure issues, reduce development costs and boost agriculture.

Since 2015, Amazon, Google, UPS, DHL and Alibaba have run high-profile drone delivery system experiments. In the future, drones could augment, or in some situations even replace, truck fleets with important implications for energy consumption, air traffic management, road congestion, urban planning, and goods and service consumption patterns in urban areas. Elsewhere, drones are also seen as a possible solution to infrastructure problems, especially in Africa where air transportation could help meet the challenges posed by poor or non-existent road and rail networks. In fact, experts believe that drones could account for 10 percent to 15 percent of Africa's transport sector in the next decade.

In 2014, 54 percent, or 3.9 billion people worldwide, lived in cities and towns. In the United States, 98 percent of the land area is classified as “rural,” but is home to only 25 percent of the population. This picture changes dramatically in Africa. In Ethiopia, for example, 87 percent of the people reside in rural areas.

Rural areas are more difficult to reach by traditional delivery methods. Delivery by drone could help.

Rural areas tend to have less developed (or at least less dense) infrastructures and may be more difficult to reach by traditional delivery methods. Delivery by drone could help to overcome this problem, providing occupants of rural areas with deliveries of everything from online shopping orders to emergency medical supplies.

The economic benefits could be vast. In Africa, for instance, the lack of infrastructure, roads and public transportation systems pose immense challenges to development. According to the World Bank, Africa would need to spend $75 billion more each year on infrastructure, operations and maintenance just to sustain its current level of development. Redirecting this investment toward drones could help meet the region's needs more efficiently and cost-effectively.

Drones have many applications. In Africa these include agriculture, mapping and surveying, land tenure (including farm boundary delineations, a major issue in African countries), land-use planning, emergency medical cargo delivery, and wildlife conservation.

Access to land is essential for food security and the livelihood of residents of rural areas of Africa. Even if involved in other trades, land provides an essential safety net during times of economic instability and helps define cultures and identities.

Drones could be used to accelerate the land registration process, facilitating land tenure assessment and titling.

However, only 10 percent of rural land in Africa is mapped and registered, which poses an immense hurdle to development. Drones could be used to accelerate the land registration process, facilitating land tenure assessment and titling. Even simple drones could vastly improve upon traditional methods of land surveying, like “boots on the ground,” costly manned aircrafts, or satellite imagery.

In 2016, Tanzania ran a pilot project using drones to obtain aerial imagery to support a national land tenure program. The pilot was successful and sparked interest in both Africa and the wider development community.

Until now, drones for precision agriculture have only been accessible to large-scale farmers in industrialized countries. But the reduction in cost, size and complexity of drones and the associated sensors means that African farmers can leapfrog more traditional methods of agriculture to ultra-modern precision farming. Drone technology offers a range of agricultural applications, including remote sensing for crop scouting and monitoring, crop volume and vigor assessments, crop inventory, precision spraying, pest management and more.

Assuming drones will be battery operated, versus gasoline powered, small commercial drones have short flight times of only 20 to 40 minutes. Weight loads always affect efficiency and many drones must carry loaded spare batteries and several chargers to the field. Recent investments in fast loading, high capacity and safe batteries could alleviate these pressures, but deliberate planning will still be needed to develop the supporting infrastructure for charging, maintenance and operations. A lack of tech-literacy and an insufficient number of high-skill operators will also affect growth.

Drone usage has sparked opposition from some who have expressed concerns about security, noise pollution, liability and property damage. Drones are also still stigmatized in some parts of the world as weapons or devices designed to spy on people. However, my own research and experience in Kenya and Tanzania showed that drones have positive associations among different stakeholders in those countries. It is possible that the use of cargo drones to deliver medical supplies has helped improve their image.

Some 26 percent of African countries now have drone regulations in place. South Africa, Mauritius, Morocco, Rwanda and Tanzania are among the countries where drones are deployed for crop scouting purposes, but widespread use in agriculture has yet to catch on across the continent.

To leapfrog development constraints via drone technology, policymakers could ensure these hurdles are met and that stakeholders are engaged in every step of the process. Specific recommendations include establishing public private partnerships, investment in research and development, and strengthening intellectual property legislation.

Shira Efron is an associate policy researcher at the nonprofit, nonpartisan RAND Corporation and a special adviser on Israel with RAND's Center for Middle East Public Policy.

This commentary originally appeared on Inside Sources on November 17, 2017. Commentary gives RAND researchers a platform to convey insights based on their professional expertise and often on their peer-reviewed research and analysis.