How Hot Is Too Hot? Rising Temperatures and the Workplace 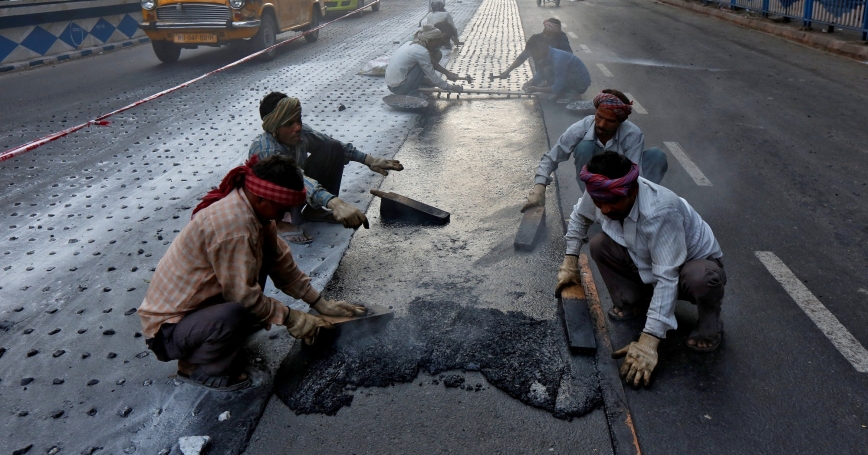 The same week Elon Musk detailed his plans over the summer to colonize Mars, many flights out of Phoenix airport were cancelled. It was too hot for the planes to safely take off. Higher temperatures cause thinner air, making it harder for the aircraft to take off and stay aloft.

Could a similar situation apply to human beings in the workplace? How long can people continue working safely as temperatures rise? And what about those who have little choice regarding the job they hold?

If current trends hold, it will become so hot that parts of West Asia will become inhospitable to human life by the end of the century. In the region's hottest area—northern India, southern Pakistan and Bangladesh—where 1.5 billion people live, the vast majority of people make a living in jobs that involve heavy manual labour.

Agriculture alone represents one in three of the world's workers, most of them in the tropics. And it's not just West Asia that's heating up. Heatwaves are occurring with alarming frequency, including in parts of the US, coastal Australia and the African Sahel.

Regardless of geographic region, manual labour is not only physically demanding but also often involves close proximity to heat. Even simple jobs like driving a bus or an auto rickshaw involve continuous exposure to a machine generating high temperatures. Industrial processes such as glass melting or working in brick kilns intensify the exposure to high heat.

Researchers have developed heat indices that measure how hot the body feels when relative humidity is factored in with the air temperature. These indices can be used to calculate when and for how long someone can work in the heat. For example, a heat index (used by the National Weather Service) indicates that 90 degrees Fahrenheit and 100% relative humidity is perceived by the body as 132 degrees Fahrenheit—representing “extreme danger” and imminent heat stroke.

Working outdoors on construction sites, laying roads, or firing and transporting bricks can be especially gruelling. Construction workers in western India regularly toil in conditions far exceeding the recommended heat index in summer and winter, according to research my colleagues and I conducted at the Indian Institute of Public Health, Gandhinagar.

At places, men, women and many times children, many of them undernourished already, work non-stop, carrying loads of newly formed bricks on their heads all day. Death from heatstroke is a distinct possibility. Yet many construction tasks must proceed in clockwork—once the brick kiln is fired the work cannot stop. Cargo must be unloaded for the next barge to dock.

The numbers of workers facing deadly heat conditions is expected to grow. As the developing world urbanizes, the ranks of construction workers will increase as temperatures rise. A recent global construction forecast notes that India is expected to be the world's fastest-growing construction market, driven by rapid population growth and urbanization, including a government commitment to connect 70,000 villages with roads.

Heat also can cause chronic health problems and affect mental health. Psychologists have documented how high heat can compromise mental health by increasing irritability and impairing decision-making, for starters.

Among outdoor workers, chronic kidney disease is an emerging public health heat crisis that has been called the “silent massacre”. Affecting almost a quarter of the population of some countries, it has been documented in Latin America, Sri Lanka and India. Observed in men working long hours in extreme heat, the current hypothesis links the condition to heat stress. Fertility reductions, too, have been documented from prolonged high temperature exposures.

Another indirect effect of working in extreme heat is an increase in industrial accidents. In an attempt to cope with hot temperatures, workers often avoid wearing safety jackets or heat-resistant clothes, heavy steel-plated safety shoes, helmets, and masks and goggles—a choice that leads to increased accidents and physical harm.

Hot environments are no longer one-off incidents; they are the new reality. Climate scientists now say the world will reach the upper limit of the human capacity to adapt. The loss of productivity in the most affected regions is expected to reach 18% by 2050. That's substantial.

Technology can offer some solutions to heat in the workplace—such as better insulating workers from the heat or scheduling hours for cooler times of the day. For instance, those who labour on farms could start working the fields in the early morning to avoid the afternoon heat. Given rapid advances in robotics and Artificial Intelligence, machines could also increasingly be used for physically arduous jobs.

But such changes may be slow to come to developing countries, and bring with them the corresponding challenge of what to do with the displaced workers.

Climate change is here. Future extreme heat waves are a given and will likely grow in intensity, geographic reach and duration. Plans need to be made now to ensure survival of the poorest, to protect outdoor workers and to adapt economic planning to what is increasingly becoming a hotter planet.

Gulrez Shah Azhar is an Aspen New Voices fellow, an assistant policy researcher at the non-profit, non-partisan RAND Corp. and a PhD candidate at the Pardee RAND Graduate School.

This commentary originally appeared on Mint on November 9, 2017. Commentary gives RAND researchers a platform to convey insights based on their professional expertise and often on their peer-reviewed research and analysis.