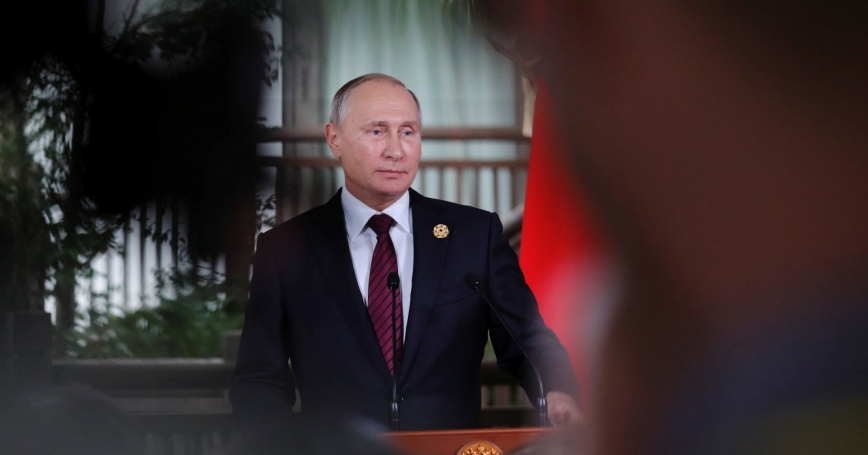 Russian President Vladimir Putin attends a briefing for reporters at the end of the APEC summit in Danang, Vietnam, November 11, 2017

The main sources of strain in Moscow's ties with the West are actions, such as Russia's aggression in Ukraine. But untruths, such as Moscow's repeated denials of interference in the 2016 U.S. election, add fuel to the fire. They can provoke stronger Western reactions and impede the search for solutions.

This is not Moscow's first untruth. In October 1962, Soviet Foreign Minister Andrey Gromyko denied to U.S. President John Kennedy that the Soviet Union had installed offensive arms in Cuba. In a dramatic appearance a week later at the United Nations, Ambassador Adlai Stevenson unveiled U-2 photos of Soviet missiles secretly emplaced there and capable of hitting America. This episode increased international support for Kennedy's steps to defuse the crisis.

In some cases, Kremlin untruths bolster support for Western sanctions.

In 2009, Sergei Magnitsky, a lawyer who uncovered tax fraud of over $200 million by Russian officials, perished in prison after being denied essential medical treatment. A Kremlin-sanctioned Russian human rights council said he was probably beaten to death. Kremlin denials of official responsibility fired up supporters of U.S. sanctions. The 2012 U.S. Magnitsky Act authorizes punishment for those responsible. Last month Canada adopted similar legislation.

Last year an independent commission found that more than 1,000 Russian athletes across 30 sports participated in an “institutional doping conspiracy.” After the Kremlin denied this, the world's leading anti-doping agencies opposed Russia's participation in the 2018 Winter Olympics in Pyeongchang.

In April, more than 80 people were killed in a suspected Syrian chemical weapons attack on the rebel-held town of Khan Sheikhoun. Putin called the incident a “provocation,” but last month a U.N. investigative panel concluded that the Syrian government conducted the attack. Apparently excusing the Assad regime's action, Russia vetoed an extension of the panel's mandate.

After a suspected Syrian government chemical weapons attack at Ghouta in 2013, Putin said it would have been been “utter nonsense” for Damascus to have done this. But within a month Moscow leaned on Damascus, and they worked with Washington to remove and destroy Syria's declared chemical weapons.

In 2014, Putin denied that Russian personnel had seized Ukrainian government facilities in Crimea, but a year later Putin admitted that he had ordered the operation.

In other cases, the Kremlin sticks to positions that enjoy little credibility.

The Kremlin pretends that Russia is not “a party to the conflict” in eastern Ukraine, even though successive NATO commanders and independent observers have pointed to Russian forces and proxies fighting there. Moscow's stance complicates the Normandy format negotiations to resolve the crisis.

In July 2014, an anti-aircraft missile downed Malaysia Airlines flight 17 over an area of eastern Ukraine controlled by Russian-backed rebels, killing 298 aboard. Last year an international team concluded that the missile had entered Ukraine from Russia and was launched from a field under rebel control. Russia still denies responsibility and has paid no compensation to victims.

On occasion U.S. leaders have told untruths as well, leading them to make embarrassing retractions. In May 1960 after Soviet Premier Nikita Khrushchev revealed the capture of U-2 pilot Francis Gary Powers, a chastened U.S. President Dwight Eisenhower conceded that the aircraft had been on a reconnaissance flight, not a weather mission. In April 1961 when reports of a U.S.-backed invasion at Cuba's Bay of Pigs began seeping out, Stevenson told the United Nations, “these charges are totally false.” Days later a chastened Kennedy took responsibility.

Kremlin untruths on several key issues—Magnitsky's death, aggression in Eastern Ukraine, and election interference—have had notable effect. They have led to unprecedented Western sanctions on Russian entities and major sectors of the country's economy and have spurred NATO to change its posture and start rotating substantial forces through its eastern and Baltic flanks.

Untruths can undermine the credibility of a state's foreign policy, as they have Russia's. Being truthful does not undo misdeeds, but it can create space for dialogue to examine problems and explore possible solutions.

This happened in 1962 after Khrushchev conceded that missiles were in Cuba and worked with Kennedy to resolve the crisis. Building on this momentum, the next year the two leaders concluded a landmark treaty banning nuclear testing in the atmosphere, outer space, and under water.

William Courtney is an adjunct senior fellow at the nonprofit, nonpartisan RAND Corporation, and was U.S. ambassador to Kazakhstan, Georgia, and a U.S.-Soviet Commission that implemented the Threshold Test Ban Treaty.

This commentary originally appeared on RealClearWorld on November 28, 2017. Commentary gives RAND researchers a platform to convey insights based on their professional expertise and often on their peer-reviewed research and analysis.