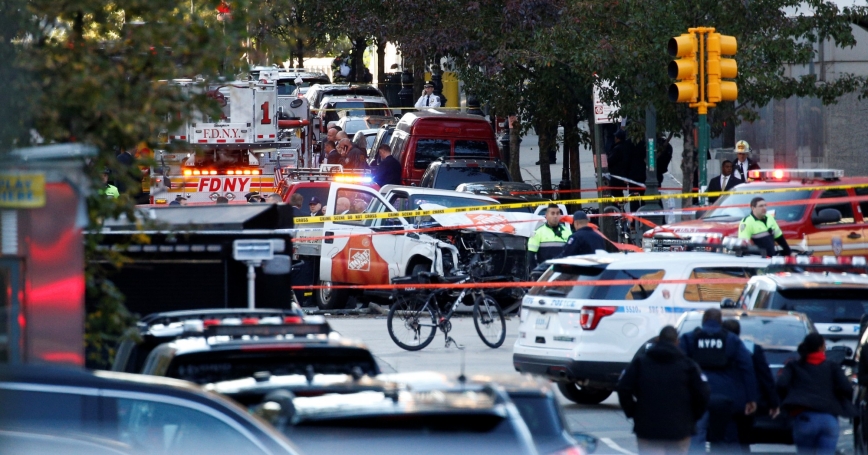 First responders work at a crime scene in lower Manhattan, where a Home Depot truck was used to strike people on a bike path, New York City, October 31, 2017

The global trend in vehicular attacks by terrorists appears to be fueled by exhortation and example. Jihadist organizations have urged their followers abroad to carry out simple attacks with readily available “weapons” and specifically mention driving vehicles into crowds of pedestrians.

Since 2010, al-Qaida has repeatedly suggested possibilities for relatively easy do-it-yourself attacks, including using vehicles to mow down civilians. And in September 2014, the Islamic State group issued a message to urge its followers abroad to kill infidels any way they could. “Smash his head with a rock, or slaughter him with a knife, or run him over with your car.” “Successful” spectacular attacks provide additional inspiration.

Ten such attacks took place between 1996 and 2013. Since 2014, the pace has quickened, with more than 40 vehicular assaults being carried out. More than 20 have occurred in 2017 alone. Not all of the perpetrators have been terrorists. Some attacks were by individuals deemed to be mentally unstable. Seven incidents have occurred in the United States since 2006.

The vehicular terrorism trend took off in Israel and the Palestinian territories more than 20 years ago. Unable to easily acquire firearms or explosives, Palestinians turned to a readily available weapon. Since 1996, they have carried out more than 20 of the 53 reported vehicular attacks. However, terrorists motivated by jihadist ideology are responsible for most of the recent attacks. They have carried out attacks in Europe and the United States, and they have proven far more lethal.

In a number of the attacks, the driver and other occupants of the vehicle continued the assault after the vehicle was blocked, stabbing bystanders until the attackers were brought down by police. Most of the recent jihadist vehicle assaults ended with the death of the attackers. In the New York attack on Halloween, a pickup truck took a deadly turn on a crowded bike path, killing eight before the driver crashed his car into a school bus, then exited brandishing two pistols that turned out to be a pellet gun and a paintball pistol. It was an invitation to be shot in what may have been intended as a suicide attack.

In the past 18 months, more than 150 people have been killed by homicidal drivers. Nearly 800 were injured, many seriously. The carnage began in Nice, France, in July 2016 when a cargo truck plowed into a crowd, killing 86, and extends to the most recent attack, in November in Toulouse, France, when a car slammed into a crowd in front of a school, injuring three. Berlin, Melbourne, Stockholm, Paris, London, Barcelona and New York City fill out the grim chronology.

Concrete barriers now protect the bike path in lower Manhattan. Such barriers are often proposed as a solution to keep vehicular terrorism at bay, but concerns about how the barriers might impede emergency vehicle access, cause difficulties for the disabled and other considerations argue against their installation. The latest attack adds weight to the argument for them in New York and a hundred other cities.

The barriers are a constant reminder of terror and provide little net security benefit. A determined attacker need only drive a few blocks further to find a group of cyclists or pedestrians crossing the street. There is no such thing as invulnerability and no easy answers. Cities are filled with vehicles and pedestrians, on the move often only inches apart.

The week after the vehicular attack on New York City, state lawmakers proposed legislation aimed at making it harder for terrorists to rent vehicles. The Vehicle Ramming Prevention Act would set up a hot-line for rental company workers to call to report suspicious activity and create guidelines to help them recognize what actions might signal terrorist intent.

Swedish authorities are exploring the possibility of geo-fencing—using technology to create a virtual boundary—in busy parts of urban areas. Such systems involve digital boxes installed on heavy vehicles that would prevent unauthorized trucks from entering or make it impossible for the trucks to go too fast, giving people more time to evade an attack. Autonomous cars could perhaps be programmed to impede their ability to be used for ramming. Society increasingly depends on technology to ensure security—humans, it seems, cannot be trusted.

If terrorists continue to employ vehicles as attack weapons, the urban landscape will slowly change as bollards, barricades and barriers, chicanes and checkpoints increasingly surround and subdivide public spaces.

This commentary originally appeared on U.S. News & World Report on December 15, 2017. Commentary gives RAND researchers a platform to convey insights based on their professional expertise and often on their peer-reviewed research and analysis.