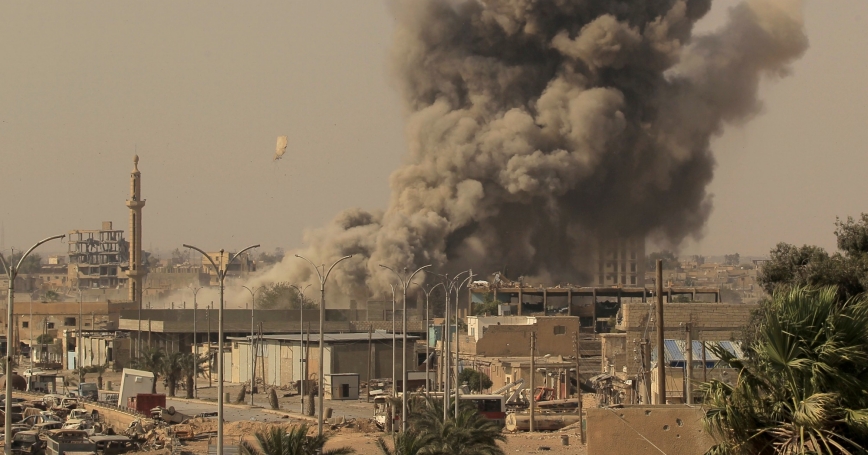 Smoke rises after an airstrike during fighting between the Syrian Democratic Forces and Islamic State militants, Raqqa, Syria, August 15, 2017

Secretary of State Rex Tillerson's recent address on American policy in Syria had all the earmarks of an “all of the above” answer to a multiple-choice question.

Without any increase in American military or economic commitments, Tillerson proposed to suppress any ISIS resurgence, oust Bashar al Assad from power, reduce Iranian influence, continue to back a Kurdish-dominated enclave, and reassure our Turkish allies.

Here is a policy that ostensibly responds to every domestic and international constituency. On the one hand, the administration is not going to expand American involvement in Syria's civil war. On the other, it is going to end that war on terms favorable to U.S. regional partners, Israel, and the Sunni Gulf states.

Talk about avoiding the hard choices.

Tillerson proposes to replace Assad as the result of free and fair, internationally supervised elections held throughout Syria and among the millions of Syrian refugees abroad.

It's important to understand why such an approach would be perceived as delusional. There is absolutely no possibility of holding free presidential elections inside war-torn, divided, and foreign militia-dominated Syria, nor is there any prospect that the government in Damascus would extend the franchise to an overwhelmingly hostile refugee population.

Some hope that Russia will eventually oust Assad in favor of some other equally pro-Russian but less tainted strong man. But it's unlikely that Iran, much stronger than Russia on the ground, would permit such a development even if Moscow were to try.

If displacing Assad were a serious objective, the United States would need to resume its support to the Syrian internal opposition and hold out the promise of massive reconstruction assistance once they prevailed. But what is left of the internal opposition is dominated by Islamist extremists or operating on behalf of Turkey against America's Kurdish partners.

Obama cut back material aid to these groups and Trump cut it off entirely. And the Trump administration has made clear that there will be no American reconstruction assistance to Syria—or for that matter Iraq—no matter who is in power.

As for the closest U.S. ally, the Kurds, they are not opposed to the Assad regime, have no intention of overthrowing it, and simply want to maintain their autonomy. Moreover, the Turkish incursion in Afrin and the regime's near defeat of the Arab opposition could eventually enable Damascus to set its sights on pushing back Kurdish gains in the east of the country.

The administration could employ its modest leverage in Syria in support of its most important but obtainable goals.

The United States retains modest leverage in Syria as a result of its small troop presence, its partnership with the Kurdish-dominated Syrian Democratic Forces, and its influence with the European and other donors that might eventually provide reconstruction assistance.

The Trump administration could employ this leverage in support of its most important but obtainable goals. These would be ending the civil war, encouraging the return of refugees, removing the Iranian-backed foreign fighters, mostly from Lebanon and Afghanistan, and helping its Kurdish partners secure their autonomy within a peaceful and reunified Syria.

Achieving these more limited goals will not eliminate Iranian or Russian influence in Syria, but it would reduce that influence. As long as the civil war continues, Iranian and Russian support is essential to the Damascus regime. In peace, not so much.

Insisting on the withdrawal of foreign fighters as the price for reconstruction assistance has more prospect of success than requiring regime change. Indeed, Assad himself is likely to want Hezbollah and the Afghan Shia militias to go home once domestic resistance ceases. Iranian influence will be diminished thereby, but not eliminated.

If these militias do not go home, if, indeed they take up permanent residence and begin to bring their families, then the demographic balance of the country will be permanently skewed in Iran's favor.

Administration officials and others argue that as long as Assad stays in power, extremist groups like al Qaeda and ISIS will find willing volunteers within the majority Sunni population. This is true, but it is even more true as long as the civil war continues. Ending the civil war and securing the departure of foreign fighters is the best way of diminishing Syria's attraction for Sunni extremists.

Last November, a RAND paper urged that the United States support the extension of Western reconstruction assistance to Syria on a community-by-community basis, conditioned only on the holding of internationally monitored local, not national, elections and the presence of a local council willing and able to work with donors.

The United States and its allies are currently delivering limited humanitarian and stabilization assistance through local councils in non-regime-controlled areas. Extending this offer to include reconstruction, and to include regime-held areas where such councils are formed and given authority could help develop a new generation of grassroots leadership throughout the country and facilitate a bottom-up transitional process toward eventual reform at the national level.

This approach would allow at least the beginnings of reconstruction while the United States employs its limited leverage to end the war, encourage the return of refugees, and secure the withdrawal of foreign militias, thereby reducing the draw of Syria as a battleground for the Islamic State and similar extremist groups.

James Dobbins is a senior fellow with the nonprofit, nonpartisan RAND Corporation, a former assistant secretary of state and the author of Foreign Service: Five Decades on the Frontlines of American Diplomacy.

This commentary originally appeared on Newsweek on February 1, 2018. Commentary gives RAND researchers a platform to convey insights based on their professional expertise and often on their peer-reviewed research and analysis.