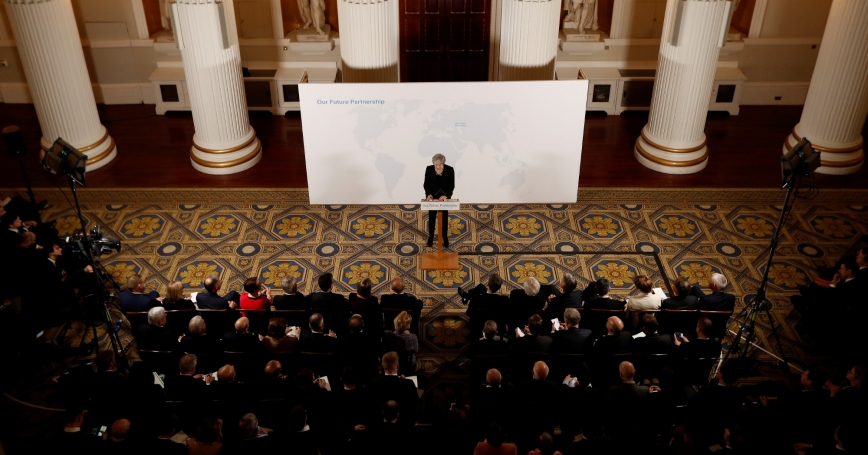 Britain's Prime Minister Theresa May makes a speech about her vision for Brexit at Mansion House in London, Britain, March 2, 2018

The New York Times reports that the British are having second thoughts about leaving the European Union. And well they should. A recent RAND study indicates that no matter how the current Brexit negotiations end, the United Kingdom will emerge economically worse off. A clean break, which some Brexit proponents advocate, yields the worst result, reducing future British gross domestic product by almost 5 percent after 10 years.

Better—although still negative—results can be achieved by Britain staying in the EU's Single Market, and perhaps also the Customs Union. But this would require the UK to accept evolving European rules and regulations without any voice in their making, and would also require ongoing substantial financial contributions to the EU.

The British government's own analysis, completed in January, reportedly projects a similar result to RAND's—an 8 percent loss in future GDP after 15 years.

EU member states have an established method for dealing with unsatisfactory referendums. It's called a do-over.

Fortunately, EU member states have an established method for dealing with unsatisfactory referendums. It's called a do-over. In 1992 Danish citizens voted 50.7 percent to 49.3 percent against ratifying the treaty that established the EU. A year later they voted again, this time to ratify, by a margin of 56.8 percent to 43.2 percent.

Ireland has voted twice to reject treaties expanding EU powers, once in 2001, with 53.9 percent opposed, and again in 2008, with 53.2 percent against. In both cases Ireland held a second referendum and ratified the treaty, with 62.9 percent and then 67.1 percent voting in favor.

In Britain's case, a Brexit do-over will be more complicated. Last March the UK formally initiated negotiations with the rest of the EU as the condition for its departure. One way or another Britain must now be out by March of next year, and this inexorable process can only be reversed, or even just slowed, if all 27 other EU members agree. But since Britain's departure is also economically disadvantageous for the rest of the union, members have incentives to welcome back the prodigal.

Since Britain's departure is also economically disadvantageous for the rest of the union, members have incentives to welcome back the prodigal.

By March 2019 Prime Minister May's government will need to present to Parliament for approval the results of its two-year negotiation with the rest of the union on conditions for the UK's withdrawal. The 48 percent of voters who opposed Brexit back in 2016 may be unhappy but not surprised with the result. Many of the narrow majority who supported leaving will likely be both unhappy and surprised, since the results will not match their expectations. Either the UK will retain its privileged access to European markets but lose its voting rights, or it will lose both. And there is no realistic prospect of making up that loss of markets elsewhere.

Should Parliament reject the package May presents, her already-severely weakened government is likely to fall, leading to new elections. The Conservative party would probably choose a new leader, and its main opponent, the Labor party, may do so as well since that party's current leader, Jeremy Corbyn, also supports Brexit. Voices in both parties are likely to call for a second referendum, along with the Scottish Nationalists and the Liberal Democrats.

In the run-up to all three of the previous do-over referendums, the EU made some slight gestures toward the holdouts. The Irish were assured that these agreements would not interfere with their neutrality or their laws on abortion. The Danes were allowed to opt out of monetary union. None of these concessions halted the broader progress of European unification, but they provided enough to change each nation's mind. Rather than seeing Britain out the door, European leaders should consider, in the event of a second referendum, what sort of gesture might serve a similar purpose this time.

This commentary originally appeared on U.S. News & World Report on March 2, 2018. Commentary gives RAND researchers a platform to convey insights based on their professional expertise and often on their peer-reviewed research and analysis.