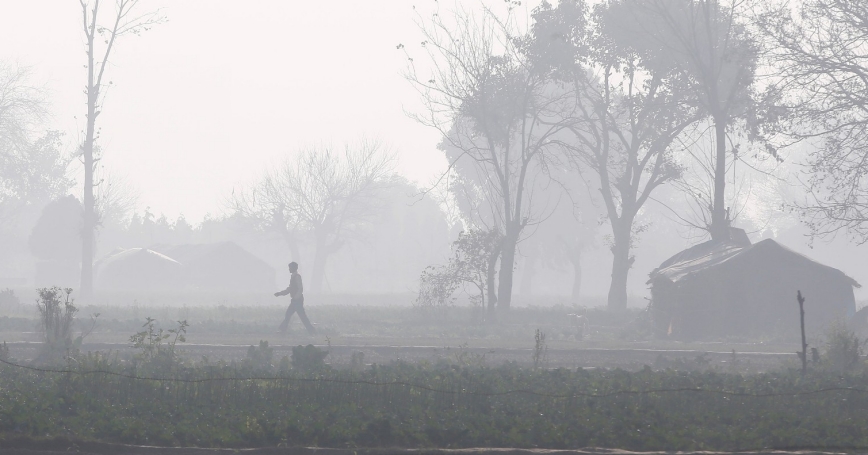 A man walks through a field amidst smog in New Delhi, India, February 7, 2018

The dirty downside to India's dramatic economic growth has received a decidedly foul airing in recent months as New Delhi—joining such big cities as Beijing, Los Angeles and Lagos, Nigeria—earned even more of a global black eye for its horrific off-the-charts air pollution.

The smog was so bad during the latest peak pollution season that a prominent official compared New Delhi to a “gas chamber,” a major medical group pronounced its air a “public health emergency,” United Airlines temporarily suspended its flights, and public health officials publicly compared the harms of breathing in India's capital to smoking dozens of cigarettes a day.

Cleaning up filthy air isn't India's only gasping economic or environmental concern. But rising initiatives to reduce India's smog have been vexed by the many gaps and challenges that confront the best-made public policy proposals in the developing world, including woes with big, deep-rooted issues such as economic and social inequity, rural-urban migration, sustainable and clean energy supplies, and climate change. Still, how bad must things get before Indians demand change and make it stick?

Policy remedies for air pollution woes are familiar and research-proven. These involve broadly galvanizing a population to take sustained steps that include stopping the burning of polluting materials; accepting stringent measures to make vehicles cleaner, more efficient (and often more costly and restricted in their use); adopting cleaner fuels and power sources (again, often at higher cost); and embracing clean and efficient public transit.

India may benefit from looking at American and Chinese efforts to curb smog (PDF), as well as putting real muscle behind plans and programs already in place.

Official air pollution monitoring exists in India, but authorities have often failed to follow through with alerts or hard actions when health conditions demand it. India has smog laws in place. But officials haven't cracked down enough on violators.

Authorities have twice tried to order emergency measures, including an experiment allowing only half the private vehicles in Delhi on the road at any one time, and banning fireworks during Diwali, a big seasonal festival of lights. Such steps have been half measures at best. The latest crisis has led officials to take even more stringent actions, including shutting schools to help slash bus and car traffic and to protect youngsters from smog's harms, and curbing building projects that create huge clouds of dust.

But some of the same economic factors that have fueled India's great, uplifting boom—making the nation one of the fastest growing on the planet and helping millions of Indians to escape poverty and rise into the middle classes and wealth—also make health and environmental improvements problematic. India is a youthful nation with an exploding population expected to number more than 1.4 billion and to exceed China's by 2024 (PDF). Even Delhi's population, now at 18.6 million, has increased more than 20 percent between 2001 and 2011.

That massive population growth also has created an unprecedented energy demand in coal-rich India, home to the world's fourth-largest reserve. Indians have yet to deal with their excessive and unsustainable reliance on highly polluting fossil fuels like coal and diesel by putting in place the needed rigorous emission and carbon controls. That's a tougher task when even abundant cheap coal still hasn't translated into reliable power supplies for India's people: Roughly 300 million Indians—the equivalent of the U.S. population—do not have access to electricity.

The poor, who flock to cities for opportunities but then often suffer greatly from the horrible pollution, contribute measurably to urban smog in India. The smog is blamed in part on vehicle emissions, manufacturing and industrial sources—and particulates from burning coal and other materials. It gets worse in the cooler winter months when the winds still and Indians try to stay warm. In cities, the poor still cook and heat their homes with wood, dung cakes, crop waste, coal and charcoal. Poor farmers near big cities like Delhi still clear and prepare fields in traditional ways, torching the remains of the previous season's crops.

Efforts to clear Delhi's especially acrid, smoky air illustrate India's policy challenges: This nation of more than a billion people is the world's largest democracy. It's a challenge to drive major change in a system with a complex maze of many political parties and a nearly constant cycle of elections. Leaders and policies need to appeal to not only a rising, educated upper- and middle-class but also to some of the world's poorest people who still make up a third of India's population.

As Indians continue to press for policies seeking national and individual advancement for themselves and their nation, laws and officials who propose what may look like economic restrictions—even for beneficial purposes like a cleaner environment—can find it is a tough sell.

Still, pollution's toll also is inescapable. The World Health Organization estimates that air pollution is now the world's single-largest environmental health risk, responsible for about 7 million premature deaths each year, or one in eight global deaths.

South and East Asia bear some of the world's highest air pollution-related burdens: More than half of all ambient air pollution related deaths in 2015 occurred in India and China. This has a significant effect on the population's health and quality of life, as RAND research has shown. But India's past and present environment ministers have criticized air pollution studies and smog control efforts, arguing more research is needed.

Pollution dampens and damages development. RAND research indicates that smog in China has significantly harmed workers' health and reduced their productivity, reducing that country's gross domestic product as much as 6.5 percent each year between 2000 and 2010. Other studies—focusing on garment workers in India, food packers in California and manufacturing workers in China—have found that air pollution exposure slashes worker efficiency. Studies link air pollution to lower crop yields and increased malnutrition risk.

India has started to tackle its major environmental problems like flooding and the destruction caused by extreme heat. It's unclear how soon Indians may decide their smog woes have become bad enough for rigorous action. The country is grappling with enormous, interlinked and conflicting forces—huge population growth, a young population with growing material needs and wants, runaway climate change, broken infrastructure, and a jobless economic growth. Galvanizing effective and progressive change that does not harm one interest to benefit another will put huge demands on India's policymakers and politicians.

Indian Prime Minister Narendra Modi has shown himself to be an advocate for business and economic development in India, and speaks with enthusiasm about the nation's need to protect its environment for future generations. Modi has his work cut out for him, to ensure that the greener “good days” he campaigned for include more than just a few gasps of clean, fresh air.

Gulrez Shah Azhar is an Aspen New Voices fellow, an assistant policy researcher at the nonprofit, nonpartisan RAND Corporation and a doctoral candidate at the Pardee RAND Graduate School.

This commentary originally appeared on Inside Sources on March 20, 2018. Commentary gives RAND researchers a platform to convey insights based on their professional expertise and often on their peer-reviewed research and analysis.