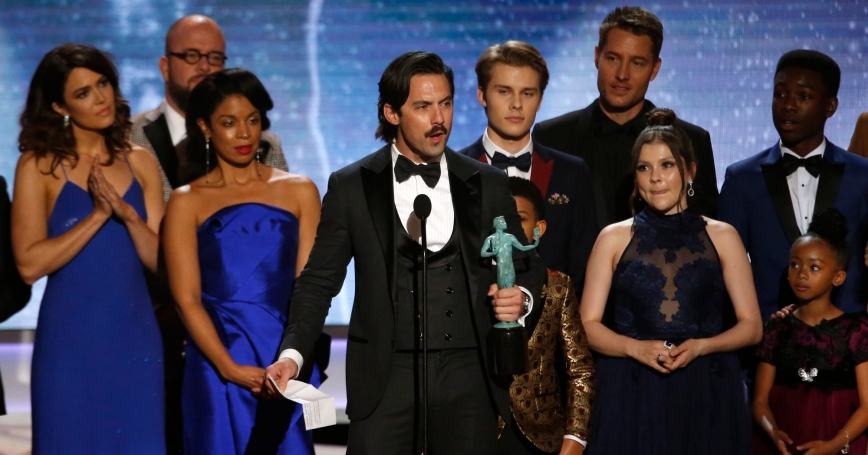 Milo Ventimiglia and the rest of the "This Is Us" cast win the SAG award for Outstanding Performance by an Ensemble in a Drama Series, January 21, 2018

Before last week, if you asked me why I loved the NBC drama “This Is Us” I would have spoken about the ways each character has the most perfect imperfections resulting in layered portrayals that include addiction and a dark struggle with fame, living with anxiety as a super-achiever, or facing fears relating to obesity and the risk of miscarriage. And that's just among “the big three,” the siblings whose past and present lives help form the core of the show.

But last week's season finale pulled particularly hard on my public health researcher heartstrings. In that one hour, the show catapulted from simply following the complex (and tear-inducing) storylines of an extended family to illustrating a far more nuanced story of families across America. As the show jumped back and forth in time to show parallel moments in the lives of its characters—from birth, through childhood, young adulthood and beyond—the consequences of social determinants of health came alive.

The “social determinants of health” are those things that illustrate how our health is impacted not only by our individual behaviors, but also by the larger contexts in which we live. Things like our level of income, quality of housing and having access to health care. The World Health Organization (PDF) developed a framework that maps out the social determinants of health. Quite honestly, I have a doctorate in public health and can still find it challenging to follow all the arrows and lines in the diagram meant to illustrate the complex relationships between people; their communities; and the larger social, economic, and political contexts in which we live. A colleague recently summarized it well: The framework illustrates how the conditions in which we live, learn, work and play can all impact our health.

Within the fictional show is a heavy dose of public health realism. In one montage, the camera focused first on one of “the big three” characters, Kevin, drinking heavily. Committed viewers of the show (including me) know Kevin has struggled with alcoholism and prescription drug abuse. Committed viewers also know Kevin could afford expensive treatment for his addictions in a private facility that provided individual and family therapy that helped him reclaim his sobriety.

Upon leaving the facility, he moved in with his mom at her upscale suburban home—not out of necessity—but a step he likely took to ensure he could slowly transition back to living on his own. Contrast that with the life of a “This Is Us” character on the other end of the financial spectrum, William, who lived in poverty, fought drug addiction and paid a high personal price.

Cut to my view of the substance-abuse plots as a public health researcher: What the season finale brings home is the fact that we often make individual choices, such as whether to drink alcohol or use drugs. But the difference in access to health care, social support and families with resources—all social determinants—can strongly impact the outcome.

Another storyline carried through the finale contrasted the stark, impoverished childhood of Deja, the foster child, with that of the near-storybook early years of “the big three.” While Deja has been shown to be incredibly resilient despite difficult life circumstances, she ends up homeless and living in a car with her mother. “The big three” experience is essentially a fuzzy-edged feel-good movie that would be at home on the Hallmark Channel. Deja had to grow up fast while many viewers might argue “the big three” are often shown struggling to be full-fledged grown-ups. When Deja finally breaks emotionally in a big way in the season finale, her actions are more understandable when viewed in the context of her larger lifelong struggles.

My husband invariably reminds me it is just a TV show (one I just may prefer to watch without him in the future). But as the second season came to a close, I couldn't have been the only public health researcher out there applauding “This Is Us” for showing us how health is not only determined by the individual decisions we make, but also dictated by the larger world in which we live.

This commentary originally appeared on Scientific American on March 23, 2018. Commentary gives RAND researchers a platform to convey insights based on their professional expertise and often on their peer-reviewed research and analysis.