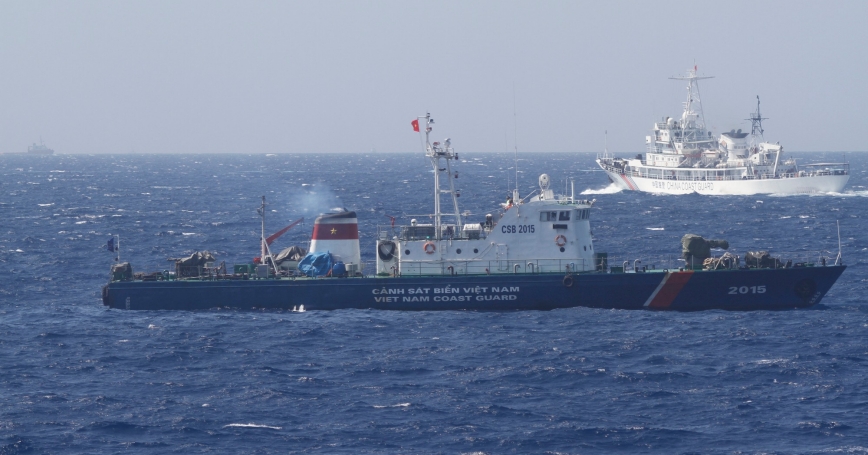 A Chinese Coast Guard ship (top) and a Vietnam Marine Guard ship in the South China Sea, about 130 miles away from Vietnam, May 14, 2014

For a country that has traditionally preferred low-key diplomacy to avoid unnecessarily antagonizing its much larger neighbor to the north, Vietnam this month very publicly engaged in a string of activities to strengthen deterrence against China in the South China Sea. The month of March offered some indicators within the shift in Vietnamese defense strategy to address growing concerns over China's military expansion and assertiveness in the region.

On March 2, Vietnamese President Tran Dai Quang visited India to meet with Prime Minister Narendra Modi. On March 3 in a joint statement, the two leaders pledged to continue their defense collaboration to include senior dialogues, arms procurement, port calls for navy and coast guard ships, and capacity-building projects. Quang and Modi also reaffirmed the importance of upholding freedom of navigation and overflight in the South China Sea as well as peaceful and legal settlement of disputes.

But most striking was Hanoi's decision to take the extra step and endorse the need for India and Vietnam to work together to ensure “a peaceful and prosperous Indo-Pacific region”—apparently the first time a Vietnamese leader has ever done so. To be sure, Quang was likely reciprocating in good faith to Indian geostrategic interests, given New Delhi's outspoken stance over the years on the South China Sea. Nevertheless, Quang's use of this language—or his modification to “Indo-Asia-Pacific” that he used during a speech delivered to an Indian think tank on March 4—signals Hanoi's willingness to accept the concept most strongly pushed by the United States that partners must work together across regions to balance and deter Beijing's activities.

Vietnam's recognition of the Indo-Pacific brings it that much closer in line with the objectives of the “Quadrilateral Security Dialogue,” or “Quad”—a strategic partnership between the United States, India, Japan, and Australia to address the challenge of China's rise. Doing so is significant but not entirely surprising given Vietnam is rapidly deepening bilateral defense ties with all Quad members.

The following day, on March 5, Hanoi welcomed the first U.S. aircraft carrier, the USS Carl Vinson, to Vietnam since the end of the Vietnam War. Vietnam's decision to receive the most iconic symbol of U.S. hard power to its shores was an unambiguous signal of deterrence to China. The visit focused international attention on U.S.–Vietnam defense relations, which, as I have said previously, have been on a roll since May 2016 when President Obama visited Hanoi and lifted the ban on selling lethal weapons to Vietnam. During a visit to Vietnam in January to finalize details of the aircraft carrier port call, Secretary of Defense James Mattis referred to Vietnam and the U.S. as “like-minded partners,” suggesting more to come in bilateral defense ties going forward. For its part, Beijing has been dismissive of the geopolitical implications.

From March 6 to 13, Vietnam was one of 16 countries participating in the biennial Milan joint naval exercises. Sponsored by India, the 2018 edition took place in the eastern Indian Ocean at Port Blair in the Andaman and Nicobar Islands. Notably, this was Vietnam's first publicly confirmed participation in Milan despite conflicting accounts about the extent of its participation in 2012. (Vietnam issued a statement denying participation in 2012, and my interlocutors tell me that while Hanoi may have sent a senior naval official in 2012, it never participated in the actual drills.)

Additionally, Milan occurred during an ongoing political crisis in the Maldives. Beijing financially supports the current president, Abdulla Yameen, and India is concerned that this leverage might eventually translate into Yameen granting China military access to the Maldives. The Maldives is geostrategically important as it offers power projection advantages in the middle of the Indian Ocean and along the route between the Gulf of Aden and Strait of Malacca. Thus, Vietnam's participation in Milan came amid rising China-India tensions in the maritime sphere.

The idea that Vietnam would join India for joint naval exercises during this particularly sensitive time must have been a bitter pill for China to swallow, but interestingly, some reactions from Beijing focused their furor on India instead. A commentary appearing in the state-run Global Times noted that “Vietnam is a springboard for Indian naval forces to expand influence from the Indian Ocean to the West Pacific.” The author goes on to explain that New Delhi is accomplishing this, in part, by involving Vietnam in Milan. Even still, by participating in Milan 2018, Hanoi sent a clear message to China that Vietnam will strengthen military partnerships that could be leveraged in support of preserving the status quo in the South China Sea, if Beijing continues to challenge it.

Although neither the New Zealand nor Australia joint statement specifically referenced the “Indo-Pacific,” they did both underscore the same principles espoused by the concept, to include the need to maintain peace and stability in the South China Sea as well as respect for legal and diplomatic processes to settle disputes. This alone demonstrates to Beijing that Vietnam has partners willing to support its position in regional fora. But by taking the extra step of raising bilateral relations with Australia and planning to do the same with New Zealand, Hanoi is set to benefit from defense exchanges with Western countries that will support the professionalization of its naval and coast guard forces.

So what should we make of these dramatic developments in March? It is entirely reasonable to assess that Vietnam's feverishly busy March aimed to improve the country's defensive position going into the fishing season in the South China Sea, which begins in May. This period tends to experience heightened China-Vietnam tensions as fishermen and coast guard from each side come into greater contact. Additionally, it was in May 2014 that Beijing unilaterally placed an oil rig in disputed waters, resulting in a months-long maritime standoff that involved Chinese coast guard aggressively ramming Vietnamese vessels. This was a disaster for Hanoi, and probably was a watershed moment prompting it to deepen defense diplomacy with partners that might offer assistance—even if only rhetorical—to get China to back down in the event of another incident.

And, additionally, certainly the election of Rodrigo Duterte in June 2016 in the Philippines spurred Vietnam to rethink its approach. Duterte has sought accommodation with Beijing over disputed features and has shelved an Arbitral Tribunal ruling issued under the United Nations Convention on the Law of the Sea (UNCLOS) in favor of Manila, leaving Vietnam as the sole major counter claimant to China in the South China Sea. The combination of these two factors make it likely that Hanoi will continue to bolster its position in the region through defense diplomacy.

It is important to recognize, however, that Hanoi's concerted push to deepen external defense ties with states that can help Vietnam's cause in the South China Sea will not necessarily translate into greater risk-taking in the region. For example, Hanoi, facing apparent Chinese pressure, once again decided to cancel the oil drilling activity of the Spanish energy firm Repsol in disputed waters for the second time in a year. This suggests that Hanoi will continue to prioritize and manage relations with Beijing in the South China Sea, even if simultaneously attempting to gain advantage by engaging other partners to offset growing Chinese power.

This commentary originally appeared on The Diplomat on March 23, 2018. Commentary gives RAND researchers a platform to convey insights based on their professional expertise and often on their peer-reviewed research and analysis.