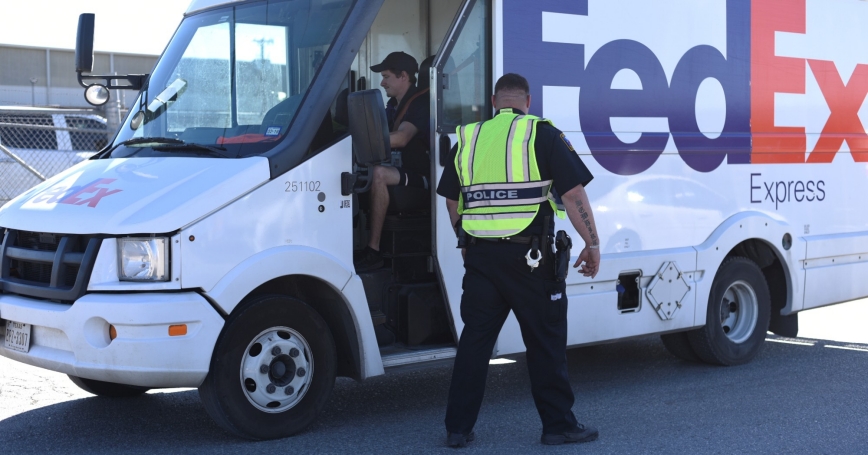 An officer with Schertz Police Department holds a FedEx truck from entering the scene of a blast at a FedEx facility in Schertz, Texas, U.S., March 20, 2018

As police closed in on the bomber who terrorized Austin recently, the suspect blew himself up, thus ending the immediate threat. Law enforcement will now begin the long process of trying to understand what motivated the bomber to do what he did. But when the Austin bomber changed his modus operandi at the end, he raised a broader question that should also be addressed—how safe is the mail delivery system?

In the initial attacks, the bombs were delivered to homes directly and did not go through the mail delivery system. But the attacks at the end were different. Several bombs were being sent via FedEx. Specifically, a bomb in a package on an automated conveyor belt at the FedEx facility in Schertz, Texas, seriously injured an employee. Investigators subsequently discovered an undetonated second device at a separate facility in a package sent by the same individual. And the FBI is investigating a confirmed link between these two FedEx packages and a private package mail delivery office in Sunset Valley, Texas, that provides packing supplies and shipping services.

Mail bombings are rare, but explosive devices and other suspicious items enter the mail system every year with postal inspectors in 2016 alone responding to more than 2,500 incidents. Prior to this incident, the last high-profile event was a 1991 Alaska mail bomb that was sent in a package to a home address and that exploded upon opening, killing a man and seriously injuring his wife. And, of course, there was the Unabomber who was tracked down by the FBI 18 years after beginning his deadly bombing spree in 1978.

Following the 9/11 terrorist attacks, the mailing of envelopes with anthrax spores to media companies and to Senate offices highlighted that the physical dangers that can be sent by mail are not limited to bombs. Since then, there have been a number of white powder hoaxes, the most recent being the letter sent to Donald Trump Jr.'s residence.

So, how safe is the mail delivery system? In 2008, RAND published a study of the public safety role of the U.S. Postal Service, which analyzed incident data, including bombs. Specifically, based on a “last-mile” analysis—an analysis of how mail is delivered during the last mile to people's homes and businesses—we found that the USPS was better at identifying and detecting suspicious packages than private couriers.

Specifically, we found that the USPS appeared to have more-sensitive capabilities to detect suspicious items than did non-USPS carriers—a conclusion based on higher rates of predelivery identification among “last mile” items (originally traveling through the private courier systems, but transferred to USPS for final delivery). The USPS was also pro-active in training staff and instituting technology to detect potentially suspicious packages.

Since our study, all mail delivery services have made continuing efforts to improve security measures. But there has also been a significant uptick in the number of pieces of mail delivered by courier services as opposed to the USPS. While roughly one-third of ground delivery courier items are eventually handled by USPS for last-mile delivery on behalf of these courier services, the largest commercial couriers are now taking on more of those final deliveries themselves.

The fact that the largest courier services are moving more into the last-mile delivery business—and the sheer proliferation of smaller private mail delivery offices and courier services—raises potential concerns about public safety. Such courier services are likely to vary in their training and technology to detect suspicious packages—something that could represent a vulnerability in how Americans send and receive packages and highlights the limits of ensuring the public's safety when we look at the mail delivery system as a whole.

Beyond better understanding what made the Austin bomber tick, it also could be worth pursuing a better understanding of what private mail delivery offices are doing in terms of training on detection and safely handling suspicious mail. This could lead to a reduction in the variability between USPS and private couriers (especially among the smaller carriers) in the training, processes and procedures in place to screen material.

Lois M. Davis is a senior policy researcher at the RAND Corporation and a professor at the Pardee RAND Graduate School. Michael S. Pollard is a sociologist at RAND.

This commentary originally appeared on Inside Sources on April 17, 2018. Commentary gives RAND researchers a platform to convey insights based on their professional expertise and often on their peer-reviewed research and analysis.