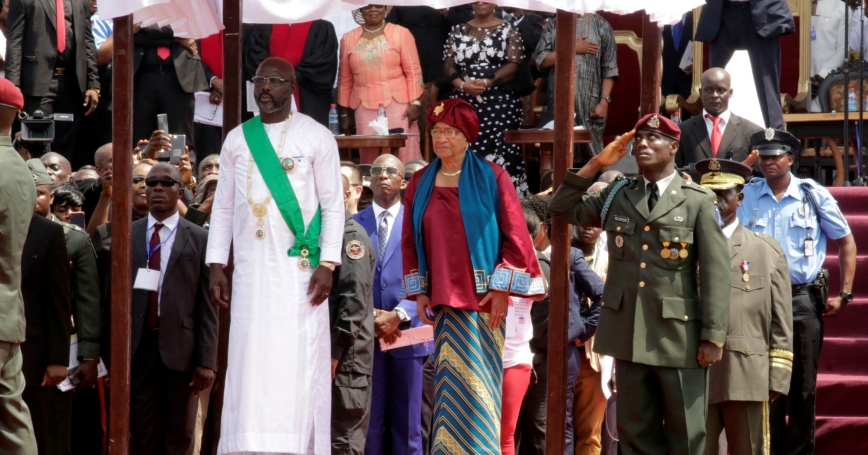 This month, Julius Maada Bio was sworn in as president of Sierra Leone, replacing the incumbent Ernest Bai Koroma, who had abided by the country's two-term limit. In January, the incumbent president of Liberia, Ellen Johnson Sirleaf, became the first president in her country's history to adhere to term limits, also stepping aside after finishing her second term.

Are these part of a broader trend? World news regularly features headlines about African power grabs and “constitutional coups.” But according to new research, most African leaders abide by their constitutional term limits.

When asked, Africans overwhelmingly say they support term limits. Approximately three-quarters of the citizens in 34 of Africa's 54 countries support term limits, according to surveys carried out by Afrobarometer (PDF), which conducts surveys in African countries where security conditions permit and citizens are largely able to speak freely.

Writing in a recently published edited volume, political scientists Daniel N. Posner and Daniel J. Young say many African leaders have transformed the way they approach term limits. During the 25 years from 1990 to 2015, they say that in the 47 countries in Africa that had non-ceremonial heads of state, 40 had term limits.

What's more, Posner and Young found “the majority of African leaders who faced two-term limits during this period stepped down when their second term was complete.” With few exceptions, leaders “who chose to seek third terms attempted to do so by working through constitutional channels rather than around them.” They argue that this amounts to a sea change in how African leaders approach political institutions and exercise power.

Other scholars have said term limits can facilitate democratization in Africa and beyond. Both Nic Cheeseman and Gideon Maltz say term limits can help push semi-authoritarian countries toward democracy by handicapping incumbents and increasing the chances of democratic turnover from one party to another.

My recent research reveals that term limits can encourage democratic changes—even when incumbent parties stay in power. My research looked at what happens when African countries adopt power-sharing accords after disputed elections. Power-sharing arrangements bring together a variety of political parties and conflict actors, often in the form of a government of national unity. When individual leaders don't expect to be around forever, they are likely to be more willing to accept constraints on their power.

While serving as president of Kenya between 2008 and 2013, for instance, Mwai Kibaki knew he would be unable to run again. A handful of high-level Kenyan officials across the political spectrum told me Kibaki's intention to step down after his second term was up in 2013 made him more inclined to agree to changes that constrained executive powers—including a new constitution in 2010—than if he was running for reelection.

Peter Nyong'o, a top opposition politician, told me in 2015 that because Kibaki “was not going to stand in 2013, he didn't have any interest in resisting” reforms. Gichira Kibara, of Kibaki's party, made a similar point, telling me: “You have a president who wants a good legacy, because he's not running in the next election.”

Contrast that with what happened in Togo from 2006 to 2010 and in Zimbabwe from 2008 to 2013. Neither of their leaders were constrained by term limits—and in both countries, incumbents remained largely opposed to broad democratic reforms during their respective power-sharing periods. With reelection on their minds, they simply did not want to constrain their own power.

Togo abolished term limits in 2002. But over the past six months, a coalition of opposition parties has been staging large-scale protests in favor of reinstating limits. Zimbabwe instituted term limits in 2013, but they did not apply retroactively. That meant then-President Robert Mugabe could have constitutionally remained in power until 2023. However, he resigned after a military intervention in November 2017.

Institutions Matter, but Are No Cure-All

In short, political institutions matter. This finding marks a significant departure from a lot of existing scholarship on Africa, which has often emphasized the centrality of informal networks and personalized systems of rule.

Of course, term limits will not cure all democratic ills. Some scholars strike a more cautious tone on the potential for term limits to push democratic progress in Africa. Political scientist Adrienne LeBas argues (PDF) that term limits often exist alongside authoritarian rule and cautions that a “focus on term limits…masks deeper sources of Africa's democratic malaise.”

Kenya again illustrates this point. Since 2013, President Uhuru Kenyatta has systematically worked to roll back significant institutional changes achieved by the power-sharing government. The most recent evidence of this was Kenyatta's assault on the judicial branch after the Supreme Court annulled his first-round election victory in September 2017. Kenyatta called the judges “crooks” and promised to “fix” them.

Posner and Young assert that once a country's president respects term limits, future presidents are very likely to do the same. During the years between 1990 and 2015, they found that “In the ten instances where a predecessor had stepped down in the face of a two-term limit, every single president who followed chose not to push for a third term.”

In this light, Sirleaf's decision to abide by Liberia's term limits and step down bodes well for the country's democratic trajectory.

Alexander Noyes is an adjunct political scientist at the nonprofit, nonpartisan RAND Corporation.

This commentary originally appeared on The Washington Post Monkey Cage Blog on April 24, 2018. Commentary gives RAND researchers a platform to convey insights based on their professional expertise and often on their peer-reviewed research and analysis.