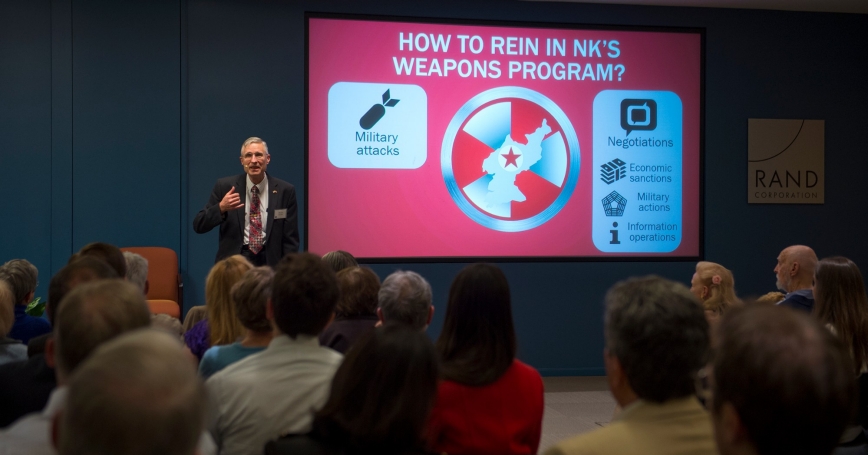 At a recent event at RAND's Santa Monica headquarters, researcher Bruce Bennett fielded a provocative question: Assuming the historic meeting between North Korean leader Kim Jong-un and President Trump takes place, what are the chances it will lead to meaningful progress?

“North Korea seldom does what it promises to do,” was the skeptical response of Bennett, a senior international/defense researcher who had just returned from his 114th trip to the Korean Peninsula. Bennett spoke on March 26 about “Shaping the North Korea Crisis,” part of a series of talks by RAND researchers on timely policy issues.

To understand why the United States has seized the chance to negotiate, it is important to understand the factors that have inflamed regional tensions, Bennett said. These include North Korea's September nuclear test, the estimated yield of which was perhaps 10 to 20 times larger than Pyongyang's previous attempts.

North Korea seldom does what it promises to do.

“People will say, ‘They've had nuclear weapons for years. They've been building missiles for years. What's the big deal?'” Bennett said. “Well, big deal number one is a much bigger explosion. Big deal number two: They are now testing [intercontinental ballistic missiles] that could hit the U.S. And big deal number three: They are moving quickly and improving significantly.”

With the danger now potentially at America's doorstep, what can the United States do to rein in North Korea?

Some have discussed the possibility of military attacks to destroy North Korea's nuclear program. But the Kim regime has hidden its weapons in various locations all over the country, increasing the chance that a cache would survive any military strike, Bennett said.

“You can't take something out that you can't locate, and they're very good at hiding,” he said.

Negotiations are the alternative. North Korea does have a history of cheating on agreements, but engaging in diplomacy is better than doing nothing, Bennett said.

So what should U.S. leaders be thinking about as they prepare for a possible summit?

Right now, Kim likely believes the benefits of having nuclear weapons outweigh the pain of economic sanctions. According to Bennett, the United States needs to change that calculation.

“If you want to get a good negotiated agreement, you must put some real pressure on the North Koreans,” Bennett said. “We have to be prepared to do things they'll find pretty disagreeable.”

“Why aren't we making a ‘soap opera' on the life and times of Kim Jong-un, showing his food, his wine, his women, his purges?” Bennett asked. “We could tell him, ‘Imagine how many in North Korea would want to see this!' Imagine what that would do to his ‘idolization' campaign. That's undercutting his potential regime survival.”

Bennett is also author of a recent RAND report on how to prepare Northern elites for the possibility of Korean unification. Just as the United States could influence Kim's thinking about the pros and cons of continuing down the nuclear path, South Korea has options for persuading North Korea's elites that peaceful unification would be good for them.

Ahead of any talks, it's also worth considering Kim's motives, Bennett said. Until recently, North Korea had been pushing forward with its nuclear program. Why is Kim suddenly claiming that he is ready to negotiate denuclearization?

“We don't know for sure,” Bennett said. But there are signs the regime may be in deep financial trouble. According to a recent report from a South Korean National Assembly member, Kim could run out of hard currency by October.

The North Korean leader may also be trying to drive a wedge between the United States and South Korea. Kim could storm out of the summit with President Trump and claim that Trump wants war in Korea, not peace, Bennett said. “Many people in South Korea would believe that. And I don't think that's something we want,” he said.

Bennett pointed out that North Korea's position has been that it can't trust the United States. “But isn't that what Kim is now saying he's prepared to do?” he asked. “You have to wonder if he's really telling us the truth.”