Stabilization Is Essential to Accomplishing the Mission 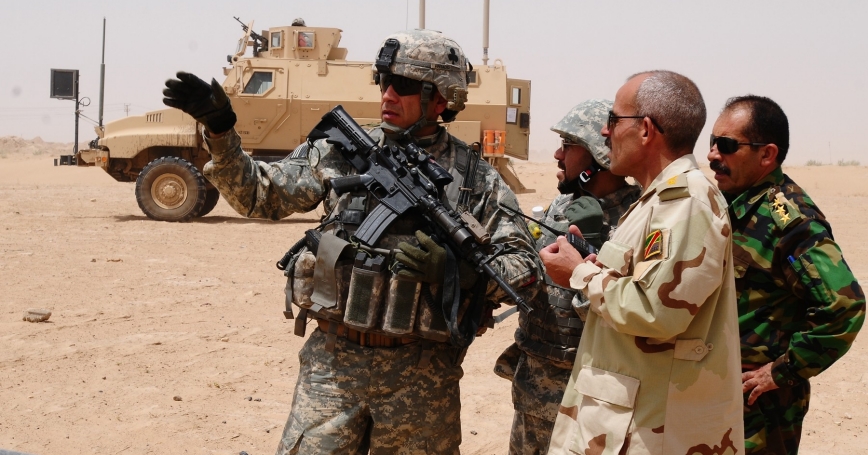 A U.S. Military Transition Team leader speaks with his Iraqi counterpart during a mission to find weapons caches in the western desert near Bayji, Iraq

The U.S. government's interest in stabilizing countries after war has waxed and waned over the past 17 years. The failure to stabilize Iraq after the 2003 intervention to remove Iraqi dictator Saddam Hussein was a searing experience for all involved, a costly mistake that led to a protracted insurgency. Following that misstep, the military-led stabilization effort fell victim to what might be called gigantism — the belief that more money produces better outcomes. Special Inspectors General in both Iraq and Afghanistan amply documented what can go wrong when overblown expectations are fueled by unbridled spending. Then the pendulum swung back the other way, and the Department of Defense (DoD) shrank from virtually any role in post-conflict stabilization. At the beginning of the anti-ISIS campaign, the U.S. military literally refused to put the word stabilization into its plan.

As the inevitable “what next” questions swirl around Iraq and Syria, and military gains remain fragile, military commanders have come to the forefront in pushing for a new model, warning that total withdrawal will ensure bad things fill the vacuum. In Iraq the U.S. military is focused on training and advising the Iraqi security forces, and in Syria it has placed small civil affairs teams out to bolster U.S. civilian efforts to build local governing councils, clear rubble and mines, and help returning civilians with small cash for work programs. Apparently in hopes of pressing Saudi Arabia to fund the effort, President Trump recently suspended funds destined for the Syria program even as Russian-backed Syrian regime forces inch into the eastern territories liberated from ISIS.

In Iraq, the civilian-led effort is showing promise thanks to a program led by the United Nations Development Program, backed by USAID oversight, U.S. funds and help from other donors. As my recent trip to Mosul showed, the actual work is largely done by the Iraqis themselves. The State Department and UN are leading the demining effort, and dozens of Iraqi engineers are repairing the electric grid and water treatment plants. But the ability of U.S. military security assistance to bolster the security forces and maintain the fragile calm remains unclear. Iranian-backed forces will surely capitalize on any drawdown in U.S. assistance to fill the vacuum and claim, as they did in 2014, that Iran is the most reliable partner.

RAND has recently published a report “Finding the Right Balance: DoD Roles in Stabilization,” which was commissioned by the Office of Stabilization and Humanitarian Assistance to support a rewrite of DoD policy on the proper roles for the military in stabilization. We surveyed the lessons of the past 17 years, interviewed many of the longest-tenured practitioners, and reviewed the investigative record. We concluded that the military is best suited to focus its activities on security-related areas, but also could lend critical help in planning, coordination, information, force protection and logistical support to enable civilian experts in the areas where they need it. The envisioned approach does not require masses of military troops, but niche military capabilities are vital, including civil affairs, construction engineers, and security force advisers.

The mission creep of earlier years served to create competition and waste instead of synergy. There is good reason to hope that the forthcoming policy will get the U.S. to the right middle road. The new policy clarifies the needed division of labor within government and directs DoD to support other U.S. government entities and combine efforts with allies and international organizations. However, “Finding the Right Balance: DoD Roles in Stabilization,” warns that this new effort will fall short if Congress does not maintain the necessary funding for the State Department and U.S. Agency for International Development to play their political and economic roles in securing the peace.

Linda Robinson is a senior international and defense researcher at the nonprofit, nonpartisan RAND Corporation and author of multiple books on military operations including stabilization in Iraq, Afghanistan, and elsewhere.