Without stabilization, successful warfighting often does not produce desired political outcomes. Yet warfighters are not the most capable actors for many stabilization tasks. This report supports Department of Defense efforts to update its stabilization guidance by assessing recent history and evaluating the roles for the U.S. military and its ability to execute them in conjunction with interagency and other key partners. 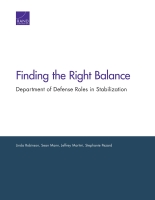 Department of Defense Roles in Stabilization

The pendulum regarding the level of U.S. military participation in stabilization efforts has swung dramatically since 2001, from a low level of preparation and participation in the early days of the Afghanistan and Iraq operations in 2003, to widespread stabilization activities costing billions of dollars in the ensuing years, to significantly scaled-back forces and resources devoted to stabilization in recent years. To remedy the initial lack of preparation, the U.S. Department of Defense (DoD) issued a directive with guidance on stabilization requirements in 2005 and then updated it with more expansive requirements in 2009. This report supports DoD efforts to update this guidance by assessing the accumulated experience of the past 17 years and evaluating the appropriate roles for the U.S. military and its ability to execute them in conjunction with interagency and other key partners.

Without stabilization, successful warfighting often does not produce desired political outcomes. Yet warfighters are not the most capable actors for many stabilization tasks. Therefore, the authors recommend shifting DoD guidance on stabilization away from requiring high levels of proficiency in a large number of tasks to emphasizing three key roles for DoD: prioritizing security tasks; providing support to other actors performing stability functions; and performing crosscutting informational, planning, coordination, and physical support roles.

Stabilization must be embraced as a U.S. policy priority

U.S. civilian entities and the United Kingdom, Germany, and France have specific stabilization roles and capabilities