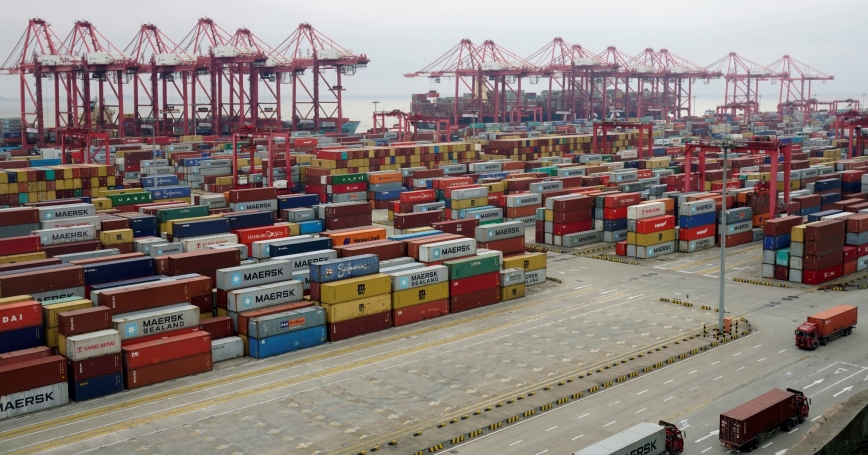 Many observers worry that trade tensions between the United States and China could escalate into a full-blown trade war, with ramifications not only for bilateral economic ties but also for the global economy. The long-term danger, however, is that if those tensions fester, they could begin to undercut the interdependence that has been so essential to keeping strategic competition between the two giants in check.

Several members of U.S. President Donald Trump's economic team arrived in Beijing last week in hopes of easing trade tensions that have been brewing. The president announced early in April that the United States would enforce tariffs of 25 percent on over 1,300 Chinese exports, totaling $50 billion, unless China permits U.S. companies greater access to its markets and clamps down on the theft of those companies' intellectual property. China immediately retaliated by proposing tariffs of 25 percent on over 100 American exports, also equaling $50 billion. In turn, Trump instructed his trade representative, Robert Lighthizer, to consider imposing another $100 billion in tariffs on China.

The Trump administration has demanded that China cut its $337 billion trade surplus with Washington by roughly two-thirds over the next two years and not retaliate against any U.S. trade measures. Beijing has proposed that it could make some headway on that front by purchasing high-tech U.S. goods; the trouble is that Washington fears such goods would further fuel a Chinese military modernization that continues apace: Beijing's military expenditures increased from roughly $68 billion in 2007 to $228 billion last year, a 236 percent increase, according to the Stockholm International Peace Research Institute (XLSX). Still, Chinese officials are at least amenable to a conversation about the trade deficit. They are far less willing to consider the Trump administration's demand that it scale back its “Made in China 2025” initiative, which aims to make China a global leader in advanced manufacturing by enhancing its competitiveness in 10 industries, including aerospace, robotics, and biopharmaceuticals. Chinese officials say that for them to consider putting that undertaking into play, Washington would have to designate China as a market economy, eliminate restrictions on Chinese imports of high-tech goods, and drop a longstanding provision that bans Chinese telecommunications equipment maker ZTE from purchasing U.S. parts.

Given the inauspicious outcome of this first round of talks, few observers on either side expect subsequent rounds to yield major breakthroughs. Indeed, many in Washington are expressing growing concern about the potential impact of deteriorating trade relations on the U.S. economy. This past Thursday, over 1,100 economists—including 15 Nobel laureates—signed an open letter warning the Trump administration that “new tariffs in response to trade imbalances” would harm workers across the country, much like protectionist measures did in the 1930s. Today, of course, Washington depends far more on trade, supply chains, and globalization than it did over three-quarters of a century ago. A Brookings Institution analysis published last month estimated there are “some 2.1 million jobs in the 40 industries that produce products now slated for Chinese retaliation.” If Washington and Beijing proceed with reciprocal impositions of tariffs, an even more recent study concludes (PDF), nearly 134,000 Americans would lose their jobs, and American farmers' net income would fall by 6.7 percent.

Over the long term, though, the main risk of indefinitely heightened trade tensions between the two countries is not commercial, but strategic: Robust economic interdependence has played a central role in preventing vigorous competition between the United States and China from devolving into outright hostility.

The ties that bind are thankfully thick and wide-ranging. The United States buys some 18 percent of Chinese goods exports, more than any other single country, and roughly two-thirds of China's $3.14 trillion in foreign-exchange reserves consist of dollar-denominated assets (PDF). On the flip side, China is America's top trading partner, the fastest-growing market for its exports and the largest foreign holder of U.S. Treasury securities.

But China has been making a concerted, successful push to reduce its dependence on trade: the share of total exports in its gross domestic product fell from over 30 percent in 2007 to under 20 percent last year; during that same time, the share of exports to the United States fell from approximately 9 percent of China's economy to just over 4 percent. If Beijing concludes that trade tensions with Washington are likely to stay, and perhaps even intensify, it may well take steps to accelerate that trend. America's current trade tensions with a range of other actors—Mexico and Canada (over the terms of a potential revision to the North Atlantic Free Trade Agreement), Japan (over the extant trade imbalance) and the European Union (over the volume of U.S. steel and aluminum imports), in particular—afford it a compelling set of opportunities to diversify away from U.S. imports. Meanwhile, the progression of Beijing's flagship economic-cum-strategic project, the Belt and Road Initiative, will enable it to deepen its footprint and forge new relationships across a wide swath of Eurasia.

China's economic heft vis-à-vis the United States has grown considerably since the global financial crisis. In 2008 its GDP was 31 percent as large as America's; in 2016, the last year for which the World Bank reports data, the ratio was 60 percent. Still, explains Ruan Zongze, executive vice president of the China Institute of International Studies, the Trump administration's mid-April decision to bar U.S. companies from selling components to ZTE highlights China's high level of dependence on the U.S. economy. One of the express objectives of Made in China 2025 is to unwind that symbiosis—an imperative that has taken on heightened urgency amid present trade tensions. Following last week's negotiations, economist Eswar Prasad observed that the U.S. delegation “seems to have had the objective of negotiating a surrender rather than a truce.”

Xi Jinping will not accept the former outcome. Instead, he will maneuver to ensure that China is increasingly capable of generating and sustaining growth on its own. The less Beijing depends on Washington economically, the more assertive it is likely to be in challenging U.S. foreign policy. Of course, the two countries had already been experiencing growing frictions on a number of issues before the recent wave of trade tensions: the status of Taiwan, territorial claims in the South China Sea, and internet governance, among others. But the United States and China had also cooperated to shore up macroeconomic stability, tackle climate change, and bring Iran to the negotiating table.

A Beijing less encumbered by economic interdependence might not only scale back such cooperation but also be more proactive in undermining U.S. national interests—whether by further undercutting multilateral sanctions on North Korea, strengthening its alignment with Russia, or more explicitly framing its approach to governance as a counterpoint to national-level political dysfunction in Washington. And while China has taken a complex attitude so far toward the postwar order—strengthening certain elements, weakening others, and developing parallel institutions such as the Asian Infrastructure Investment Bank (AIIB) on the outside—it may embrace a more overtly revisionist posture if it is not as concerned about the extent of America's economic leverage.

If these shifts occur, they will do so gradually. It would take far more than the tit-for-tat retaliation observers presently fear to undo the interdependence the two countries have accrued in the more than 15 years since China acceded to the World Trade Organization. But leaders in Washington and Beijing should recognize that short-term trade tensions, left unchecked, could undermine a longstanding ballast of bilateral ties over the long term, with profound implications for global stability.

This commentary originally appeared on The Diplomat on May 9, 2018. Commentary gives RAND researchers a platform to convey insights based on their professional expertise and often on their peer-reviewed research and analysis.