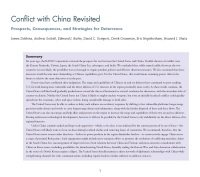 Prospects, Consequences, and Strategies for Deterrence

Although armed conflict between the United States and China is not likely, the possibility is real enough to require prudent policies and effective deterrent measures. In the past six years, the range and capabilities of Chinese air and sea defenses have continued to grow, making U.S. forward basing more vulnerable and the direct defense of U.S. interests in the East Asia region potentially more costly. As these trends continue, the United States will find itself gradually pushed more toward the threat of horizontal or vertical escalation for deterrence, with the attendant risks of counterescalation. Neither the United States nor China is likely to employ nuclear weapons, but even an initially localized conflict could quickly spread into the economic, cyber, and space realms, doing considerable damage to both sides. One means of improving the prospects for direct defense and reducing the risk of escalation is for the United States to continue to enable the capabilities and buttress the resolve of China's neighbors. And a parallel effort should be made to draw China into cooperative security endeavors, not only to avoid the appearance of an anti-China coalition but also to obtain greater contributions to international security from the world's second strongest power.

The United States Will Likely Find Itself Forced to Shift From Deterrence by Denial, Based on Direct Defense of Its Interests and Allies in the Western Pacific, to Deterrence by Punishment, Based on the Threat of Escalation

This Perspective was sponsored by the United States Army and produced within the Strategy, Doctrine, and Resources Program, part of the RAND Arroyo Center.