Where Is Georgia Headed? 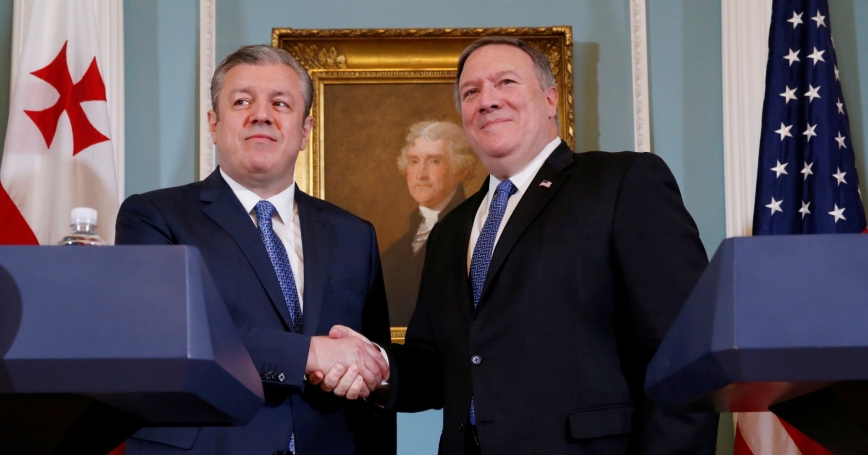 Secretary of State Pompeo May 21 stated that “Russia's forcible invasion of Georgia is a clear violation of international peace and security,” and he called on Moscow to “withdraw its forces to pre-conflict positions.” Pompeo said President Trump “stands by the 2008 Bucharest declaration,” which affirms that Georgia “will become a member of NATO.”

Pompeo's remarks underline the quarter-century of strong U.S. support for independent Georgia, which this month is celebrating the one hundredth anniversary of the establishment of the first Georgian Republic. A democracy, it embraced a liberal constitution and sought a European future but survived only a few years before being invaded and annexed by the USSR.

Since renewed independence in 1991, Georgia has made steady progress toward full European and Euro-Atlantic integration. Georgia has also stabilized relations with Russia, despite its 2008 invasion and continued occupation of parts of Georgian territory. Deft diplomacy and Western support have helped induce Moscow to restrain its aggressive inclinations toward Georgia. Yet Tbilisi's Western aspirations remain unresolved and at risk.

Georgia's continued progress (PDF) requires deepened reforms, sustained Western backing for integration into Euro-Atlantic institutions, plus patience and determination. Enlargement of the family of free, democratic nations in wider Europe is being tested, especially in Georgia and Ukraine.

While Georgia's fast track entry into NATO or the European Union is not a near-term prospect, expanded practical cooperation will buttress ties with them, for example deeper trade relations and further participation in NATO exercises. Intensified bilateral cooperation with European countries and the United States is also important. Concentrating on the practical could help Georgia strengthen its democracy, improve its economy, and increase its resilience.…

The remainder of this commentary is available on nationalinterest.com.

William Courtney is an adjunct senior fellow at the nonprofit, nonpartisan RAND Corporation, and a former U.S. ambassador to Kazakhstan, Georgia and a U.S.-Soviet commission to implement the Threshold Test Ban Treaty. Daniel Fried is a distinguished fellow at the Atlantic Council and was assistant secretary of State for European Affairs and served on the NSC staff for Presidents Clinton and Bush. Kenneth Yalowitz directs the MA Program in Conflict Resolution at Georgetown University, is a global fellow at the Wilson Center and former ambassador to Belarus and Georgia.

This commentary originally appeared on The National Interest on May 22, 2018. Commentary gives RAND researchers a platform to convey insights based on their professional expertise and often on their peer-reviewed research and analysis.