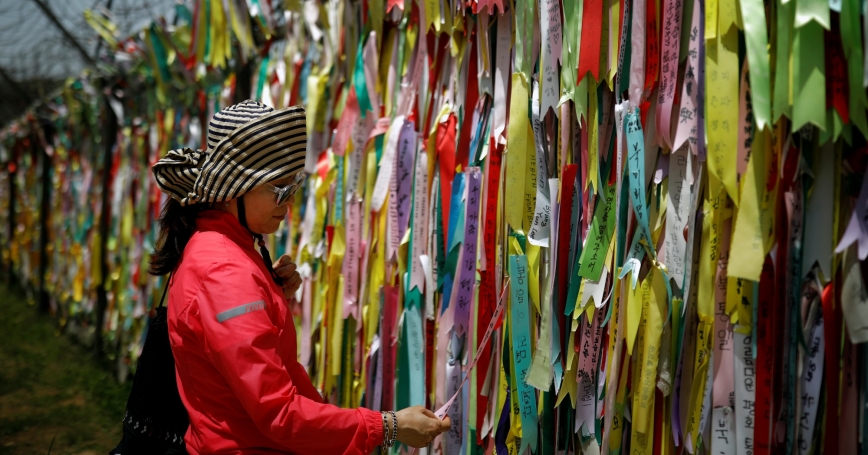 A woman looks at ribbons bearing messages wishing for the unification of two Koreas on a barbed-wire fence in Paju, South Korea, May 24, 2018

During the height of the Cold War, North Korean defectors were celebrated as symbols of freedom and a direct indictment of a brutal North Korean regime. Yet over time, the meaning endowed upon North Korean defectors steadily changed. They became living monuments to the complex facets of the frozen conflict: the broken families, the increasing disparity between the North and South and, most importantly, the fragile dream of a unified Korean Peninsula. And now, with the tenuous prospect of an enduring peace, North Korean defectors offer a glimpse into the challenges of reintegrating the two countries. An understanding of the challenges of North Korean resettlement in the Republic of Korea (ROK) could bridge the gap between a policy of reunification and its successful realization.

According to the Ministry of Unification (MOU), by 2017, 30,805 North Korean defectors had entered the ROK. After an initial security screening by South Korean intelligence, the MOU offers North Korean defectors full citizenship, housing subsidies, vocational training, educational opportunities and a 3-month social adjustment course. In theory, the MOU's Hanawon Resettlement Center serves as a seamless transition, where North Koreans learn the skills to be normal, productive citizens in their new home. However, theory is often rosier than reality.

For most North Korean defectors, escape means political freedom, but their trauma often follows them across the DMZ. According to a 2018 study by the International Journal of Environmental Research and Public Health titled Trauma and Depression among North Korean Refugees, 71 percent of North Koreans reported experiencing traumatic incidents in their pasts – ranging from the execution of family members to personal abuse. The study notes that “depression is the most frequently reported mental health problem among adult North Korean refugees, with the prevalence of depression ranging from 29 percent to 49 percent.” According to researchers, this often leads North Korean defectors to feel trapped in a cycle of negativity, suffering recurring bouts of anxiety, isolation, hostility, and paranoia. Worst of all, this is compounded by all the typical anxieties and stresses of moving to a new country.…

Sebastian J. Bae, a defense analyst at the RAND Corporation, specializes in defense wargaming, emerging technologies, counterinsurgency, and strategy and doctrine for the U.S. Army and Marine Corps. Previously, he served six years in the Marine Corps infantry, leaving as a Sergeant. He deployed to Iraq in 2009. He has previously published in Foreign Policy, War on the Rocks, Strategy Bridge, Task & Purpose, the Diplomat, and Georgetown Security Studies Review.

This commentary originally appeared on The Cipher Brief on June 11, 2018. Commentary gives RAND researchers a platform to convey insights based on their professional expertise and often on their peer-reviewed research and analysis.