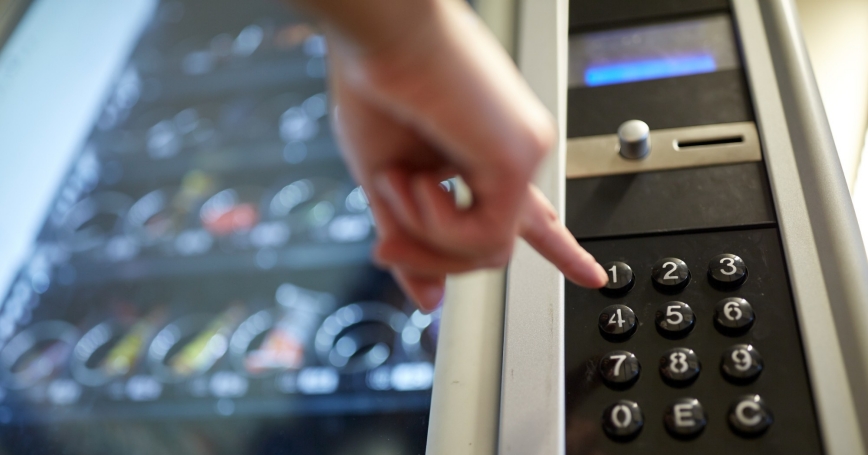 In the middle of a nationwide obesity epidemic, a handy device dripping with temptation often lurks around the workplace corner—the vending machine.

America's vending machine industry earned $21.6 billion last year, according to Vending Watch magazine. There are 7 million vending machines in the U.S. and 100 million Americans use them each day (PDF), the National Automatic Merchandising Association reports. The machines mostly promote sugary beverages, candy, cookies and chips. In other words, foods that only increase the risk of obesity.

The easy availability of excess quantities of food in modern times is unique in all of history. Having evolved in an environment of scarcity, human beings have not been able to adapt to surplus and limit consumption. An important solution long recognized by successful dieters—but largely ignored at the societal level—is to reduce the easy access to unhealthy foods and sugary drinks. Overweight or obese people who want to lose weight also likely know they should forego these foods and drinks, since they contribute few nutrients needed for optimal health. But easy access to them makes eating healthy that much harder.

Given that about 70 percent of American adults are overweight or obese, vending machines could be one more place where employers can help Americans avoid junk, whether that means filling the machines with truly healthy options or eliminating them in the workplace altogether.

Cutting back on vending machines or replacing some of the snacks with healthier options may seem like a more attractive option for employers and employees, but the chances that halfway measures will succeed are slim. The scientific literature shows that in order to change ingrained habits, abrupt changes in context are needed. Just seeing tempting food can stimulate the desire to eat, even when people are not truly hungry. A changed environment will eliminate the cues that previously triggered unhealthy behaviors. People who eat three meals a day don't necessarily have to snack, since hunger pangs don't usually occur for at least three to five hours after a meal.

Humans are designed to eat more than they need, and our bodies turn the food into fat that can be used for energy later on. We are also naturally attracted to foods high in sugar, fat and salt. Even if we would prefer not to consume unhealthy foods, when we are stressed out or under pressure it is common to lose self-control and eat what we later wish we hadn't. A vending machine filled with poor dietary choices makes it all too easy to make a bad choice.

While there may be a trend toward stocking the machines with snacks marketed as “healthy,” these alternatives are often only slightly modified versions of unhealthy snacks. Both contain highly processed ingredients—the main difference is that the so-called healthy option has fewer calories or reduced saturated fat content than its unhealthy cousin. The only truly healthy snacks are fruits, vegetables, nuts and seeds—and few vending machines contain these products exclusively.

Vending machines may comprise only a fraction of the calories people consume, but removing them from the workplace could initiate a change in norms. Just putting unhealthy foods in the workplace sends a signal that these products are routine and acceptable everyday items for consumption. Their presence in the workplace is not benign.

But making vending machines vanish from the workplace is a tall order. Companies may be reluctant to lose the extra income gained from vending sales, while many workers will likely be disgruntled if they lose their afternoon access to a candy bar or chips. Ideally—and before a move is made—employers and employees should engage in a dialogue that helps each side understand how a vending machine-free workplace would be a win-win, however difficult the adjustment might be.

Decreasing the ubiquity and availability of low-nutrient junk food could go a long way toward addressing obesity in the U.S. One significant benefit could be a healthier workforce. Removal of the machines would not constitute a ban on junk food. Employees—many of whom struggle to control their caloric intake—would still have the option of bringing in whatever foods they want to consume. That could help make the decision to consume junk food more intentional and not the result of workplace conditions that can lead to making impulsive choices on automatic pilot.

Deborah A. Cohen is a senior natural scientist at the RAND Corporation, and the author of A Big Fat Crisis: The Hidden Influences Behind the Obesity Epidemic-and How We Can End It.

This commentary originally appeared on Fox News Channel on June 29, 2018. Commentary gives RAND researchers a platform to convey insights based on their professional expertise and often on their peer-reviewed research and analysis.