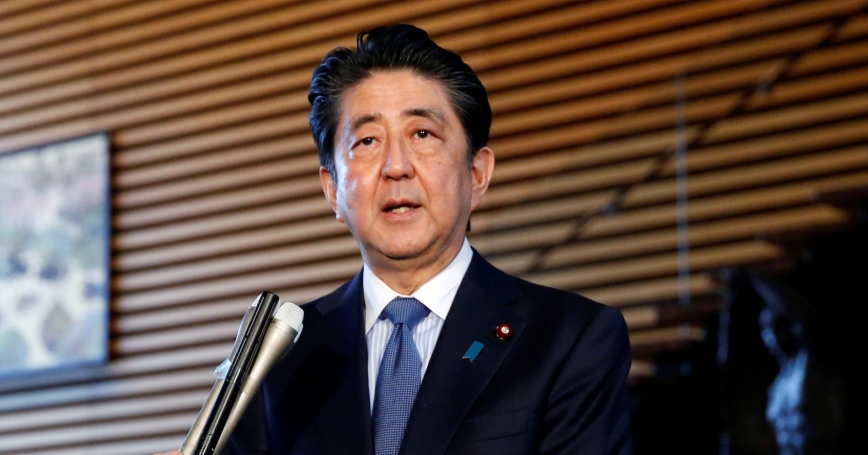 Japan's Prime Minister Shinzo Abe speaks to media at his official residence in Tokyo, Japan, after the Singapore summit between the U.S. and North Korea, June 12, 2018

While pundits continue to discuss the outcome of the summit between U.S. President Donald Trump and North Korean leader Kim Jong Un, one thing remains certain, there is a long road ahead for any detailed implementation regime. The summit represents a first, yet crucial, step that creates political space within which to negotiate many difficult issues.

The road to the June 12 summit went through every regional player except Japan. After the United States and North Korea signaled a shift in their approaches, North Korea held summits with Beijing and Seoul. And Russia's foreign minister even met with Kim.

Japan, however, has not held any formal bilateral meetings with these actors. Instead, afraid its interests would not be addressed, Prime Minister Shinzo Abe organized a trip in April to meet Trump to remind him of Japanese concerns and coordinate strategies. Another one occurred on June 7. Compared with the active summitry among Kim, South Korean President Moon Jae-in, Trump and China's President Xi Jinping, Abe appeared to be locked out of regional diplomacy. Instead, Tokyo has been forced to rely on Washington to advocate for its interests.

Abe's absence in the current flurry of regional geopolitics stands in stark contrast to the vision he introduced—and since advocated—in December 2013. Tired of being painted as a reactive state, Abe announced Japan as a proactive contributor to peace in that country's first national security strategy (PDF). Abe's aim was to make Japan less a passive security consumer and more of an active player in regional security affairs.

Japan has both stakes in the outcome of the regional diplomacy and a potential part to play in what comes next. Rather than lamenting about being “left outside of the mosquito net,” however, Japan could make the case on why its absence at the negotiating table will be a detriment. Below are areas where these Japanese interests and likely roles could lead the Abe government to seek a more involved role in the discussions moving forward.

Japan could make a case for why its absence at the negotiating table will be a detriment.

Resource reasons are always going to top the list. Japan is the world's third-largest economy and a major international donor. Like its role in previous agreements with North Korea, Japanese financial resources could be important to the success of any settlement given how expensive costs will be and the inability of South Korea to bear them alone.

For example, if North Korea is serious about denuclearization, funding for the international effort will be critical. With much of North Korea's nuclear program hidden away in tunnels, and the need to destroy or decommission facilities and stockpiles of materials (nuclear, chemical, and biological), the expected expenses will likely require a unity of effort by the major economies, including Japan.

But Japan could play a role far beyond simply writing checks for an agreement. As an active member of the International Atomic Energy Agency and having a long history of civilian use of nuclear power, including its post-2011 disaster history of decommissioning several nuclear power plants, Japan could provide a tremendous pool of technical assistance and skilled manpower to assist the process. Likewise, it could provide robots or ground-penetrating radar to examine sites deemed too dangerous to enter. Finally, should humanitarian aid packages be required, Japanese support for aid and food assistance could be vital for any humanitarian campaign.

There are also important implementation considerations. North Korea's history of violating past agreements and attempting to play countries off against each other means that any agreement is always vulnerable to failure. For an agreement to hold, and ultimately succeed in the long run, regional buy-in and unity of effort will likely be required. This includes having all regional parties agree to lift sanctions, when the time is right. Having Japan as an active player with South Korea, China, and the United States could help align regional perspectives in devising, and sticking to, an implementation process. An agreement that excludes issues important to Japan could become a source of insecurity if Japan views it as locking in inequities.

Apart from nuclear weapons, Japan's most consistent concern has been North Korea's missiles. Since the 1998 launch of the Taepondong missile that overflew northern Japan, North Korea has launched missiles toward Japan, over Japan, and into Japan's exclusive economic zone. Today, its arsenal of short- and medium-range missiles can strike anywhere in Japan. And despite having developed a two-layered ballistic missile defense system with the United States, with many North Korean missiles on mobile launchers, there is no guarantee that Japan can detect every launch and defend against every missile.

If these concerns are not addressed, Japan may take actions that it sees as defensive, such as bolstering missile defense or acquiring long-range strike capabilities, which could undermine an agreement should North Korea feel threatened by those actions. Any agreement would be more likely to succeed if all North Korea's neighbors support it and work to implement it. But they will only do this if they see an agreement as beneficial to them. If Japan was largely excluded, it could jeopardize long-term success of any agreement should that nation's security concerns be left unaddressed.

A third reason why Japan could try to become more involved in discussions stems from a key role Japan plays in South Korea's security. Despite not being a signatory to the Korean War armistice, America's ability to respond to a resumption of hostilities has been, and remains, partially a function of Japanese support. Japan is home to the U.N. Command-Rear (PDF). In a contingency, this command is responsible for managing force flow from U.N. sending states. It does this by utilizing seven U.N./U.S. bases (PDF) in Japan based on a U.N.-Japan Status of Forces Agreement that allows these sending states to flow through the country. And should the United States need to flow forces through Japan, or deploy its current troops in Japan to the peninsula for combat, Japan takes a strict view that the United States has committed to engaging in prior consultation with Japan.

Taken together, should the current flurry of goodwill break down and hostilities resume, there are multiple avenues by which Japan would be involved. South Korea's security is inextricably tied to Japan. On that basis, it makes less sense for Japan to be relegated to a minor player in possible peace negotiations when it plays a major role for South Korea's security.

There is also a reason that the United States might find greater Japanese involvement advantageous. For decades, U.S. leaders have declared the alliance is vital for regional peace and security. Through numerous agreements and two revised defense guidelines, the alliance has gotten stronger in anticipation of playing a leading role in ensuring regional peace. To use language from a 2015 Joint Statement, there is an “indispensable role of the Japan-U.S. Alliance in promoting regional peace, security, and prosperity.”

As recently as 2017, in a joint statement between Trump and Abe, the two leaders agreed the “unshakable U.S.-Japan Alliance is the cornerstone of peace, prosperity, and freedom in the Asia-Pacific region.” With North Korea being the most pressing issue for the two allies, Japanese involvement could demonstrate U.S. unity and solidarity with its democratic allies in ensuring that North Korea implement what it has agreed to, and provide a counterweight to Chinese (and potentially Russian) influence. This could help push North Korea into realizing its only real choice, short of war, is to continue forward progress with diplomacy.

Of course, there are reasons to expect that Japan's active inclusion will remain a hard sell. Japan's prioritization of the abductee issue on the same level as the North's nuclear weapons and missile programs tends to provide ammunition to critics in the United States, South Korea, and China who view more parties as unnecessarily complicating negotiations with bilateral issues.

Similarly, historical issues with China and South Korea continue to strain Japan's bilateral ties with each country, making it unlikely either country wants to help Japan. And because Japan has more or less maintained the “maximum pressure” approach, there is little reason to believe North Korea would want Japan included. If anything, Japan's approach could provide Pyongyang with an opportunity to drive a wedge between the U.S. allies.

Diplomats hoping to fit their approach to match the realities of the geopolitical situation could benefit from Japan's active involvement moving forward. Abe says Japan is a proactive contributor to peace. Now, if he chooses to, he may have an opportunity to convince the region that it is.

This commentary originally appeared on The Japan Times on June 20, 2018. Commentary gives RAND researchers a platform to convey insights based on their professional expertise and often on their peer-reviewed research and analysis.