Why Children Need to Be Shielded from Marijuana Ads 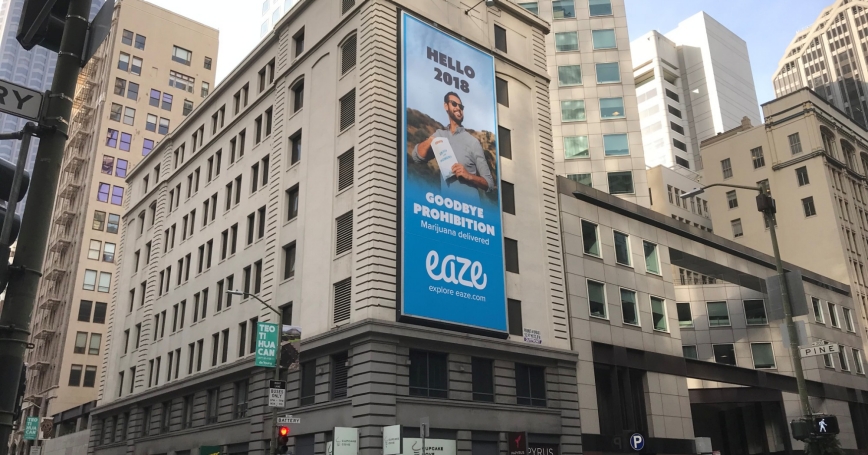 A billboard advertises marijuana in advance of the legalization of recreational marijuana in San Francisco, California, December 29, 2017

The legalization of recreational marijuana use in California has set off an advertising boom on billboards across the state. The gigantic ads try to persuade us—and our offspring—that we can easily get “chill vibes,” say “goodbye stress,” or “get rid of pesky hangovers.” The proposed cure-all, of course, is marijuana.

Since recreational marijuana became legal as of the first of the year, advertising for the drug has gotten out ahead of regulations that could restrict where and how teens are exposed to such promotional displays. But a new Los Angeles City ordinance scheduled to go into effect next month is aimed at protecting minors from exposure to marijuana ads.

The ordinance focuses on outdoor advertising, and it mirrors established tobacco-advertising guidelines. It will prohibit a billboard promoting marijuana within 700 feet—more than twice the length of a football field—of obvious places children might be. This includes daycare and youth centers, schools, public parks, libraries, and playgrounds. It will also restrict smaller outdoor signage, limiting a cannabis retail business to one on-site sign—no portable signs or sandwich boards.

Solid data about the effects of marijuana advertising back up these restrictions. A seven-year research project my colleagues and I recently completed for RAND confirmed what common sense suggests: The more exposure young people have to marijuana advertising, the more likely they are to use the drug and to have positive views about it.

We began our research in 2010, looking for predictors of alcohol and drug use among California teenagers, inspired in part by the movement to legalize recreational marijuana in the state. We recruited more than 6,500 adolescents from 16 middle schools in three school districts in Southern California who went on to attend more than 200 high schools in the region. Among other things, we asked these teens about their exposure to medical marijuana advertising.

The proportion of teens who reported viewing medical marijuana ads increased sharply over the course of the study, possibly because more ads appeared during the push to legalize marijuana in the state. In 2010, 25 percent of teens said they had seen at least one medical marijuana ad during the previous three months. By 2017, the exposure rate had nearly tripled to 70 percent. And that was before recreational-use legalization created this year's explosion of marijuana billboards on city streets.

In our study, teens who reported seeing more medical marijuana advertising were more likely to report having used marijuana in the previous 30 days, and they were more likely to say they expected to use it within the next six months. They were also likely to express more positive beliefs about the drug, such as agreeing that marijuana could help someone have more fun or temporarily escape their problems, and to report more negative consequences from marijuana.

Parents need to remind teens that the ads they do see almost never tell the whole story.

These responses suggest that exposure to medical marijuana advertising may play a significant role not only in shaping teen attitudes about the drug, but it may also contribute to increased use and related negative consequences throughout adolescence. Among the negative consequences the teens reported: skipping school, having trouble concentrating on tasks, and doing something they later regretted, such as having a heated argument with friends or family.

Stricter marijuana advertising regulations are good public policy. The state's recreational-use law limits sales of pot to those 21 or older. This is important because many studies link marijuana use during adolescence to cognitive deficits, depression and other mental health problems. In addition, many teens think marijuana use is less dangerous than alcohol use. According to a 2016 study by the AAA Foundation for Traffic Safety, younger drivers were more likely to say they thought it was safe to drive after using marijuana—even though research has shown that marijuana use impairs driving ability.

Parents won't be off the hook just because the under-18 set may now be exposed to fewer ads. They should be prepared to share up-to-date information on the effects of both medical and recreational marijuana with their kids. They need to remind teens that the ads they do see almost never tell the whole story. By design, advertising is aimed at persuading us to want something.

In the case of marijuana, that something is definitely not good for teenagers.

Elizabeth J. D'Amico is a clinical psychologist and senior behavioral scientist at the RAND Corporation.

This commentary originally appeared in Los Angeles Times on June 18, 2018. Commentary gives RAND researchers a platform to convey insights based on their professional expertise and often on their peer-reviewed research and analysis.