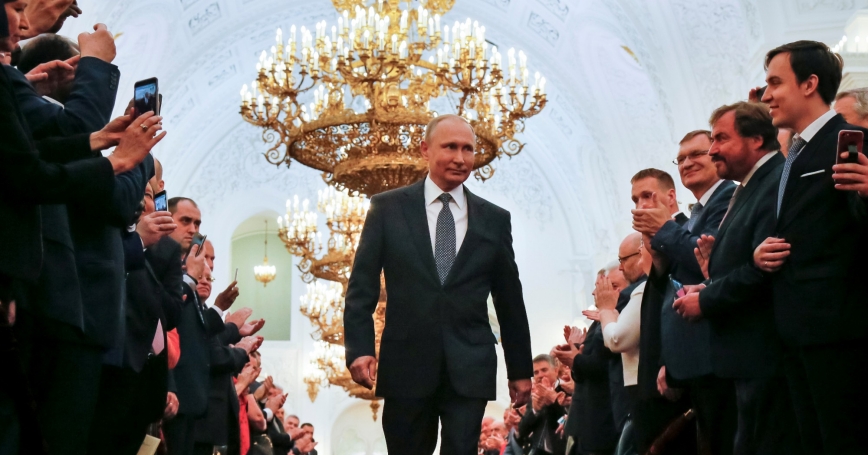 Russian President Vladimir Putin walks before an inauguration ceremony at the Kremlin in Moscow, May 7, 2018

In preparing for the summit with Russian President Vladimir Putin on July 16 in Helsinki, President Donald Trump could benefit from a coordinated Western approach toward Moscow as a prelude. But at present, disputes within the West are a serious hindrance. At the July 11-12 NATO summit, leaders should consider priorities and develop clear policies, especially regarding Russian aggression in Ukraine and Georgia. Absent this, Trump's hand with Putin may be weakened.

The U.S.-Russia summit, if properly prepared and conducted, could begin to put a floor under tense relations. Progress, however, may depend in part on whether Putin sees the West as unified and Trump as someone who speaks for it. Putin likely perceives disunity between America and Europe in Trump's revocation of his support for the June 9 G-7 summit communiqué and his criticisms of German Chancellor Angela Merkel, Canadian Prime Minister Justin Trudeau, and other leaders. And Putin can be expected to play on this in efforts to split the West and obtain concessions from Trump, such as sanctions relief.

Europeans are concerned about Trump's criticism of NATO, the European Union, and the WTO and what this portends for the NATO summit. Divisions within the EU also imperil Western unity. In recent days the populist government of Italy refused to accept a ship loaded with 629 migrants (which then found safe harbor in Spain), reigniting the continent's controversy over migrants. Beset by this issue in Germany, Chancellor Merkel is struggling to keep her coalition alive. And the European Union has again been trying to find ways to alleviate and share refugee burdens. The UK has made “no substantial progress” on how to manage the Irish border after leaving the Union. French President Macron has compared the rise of populism across Europe to the spread of “leprosy.”

The remainder of this commentary is available at the-american-interest.com.

Denis Corboy is a visiting senior research fellow at King's College London and was European Union ambassador to Georgia and Armenia. William Courtney is an adjunct senior fellow at the nonpartisan, nonprofit RAND Corporation, and was U.S. ambassador to Kazakhstan, Georgia, and a U.S.-Soviet commission to implement the Threshold Test Ban Treaty. Kenneth Yalowitz is the director of the MA Conflict Resolution program at Georgetown University and a global fellow of the Woodrow Wilson Center, and was U.S. ambassador to Belarus and Georgia.