Why 'Guilt-Free' Lanes at the Supermarket Could Help Fight Obesity 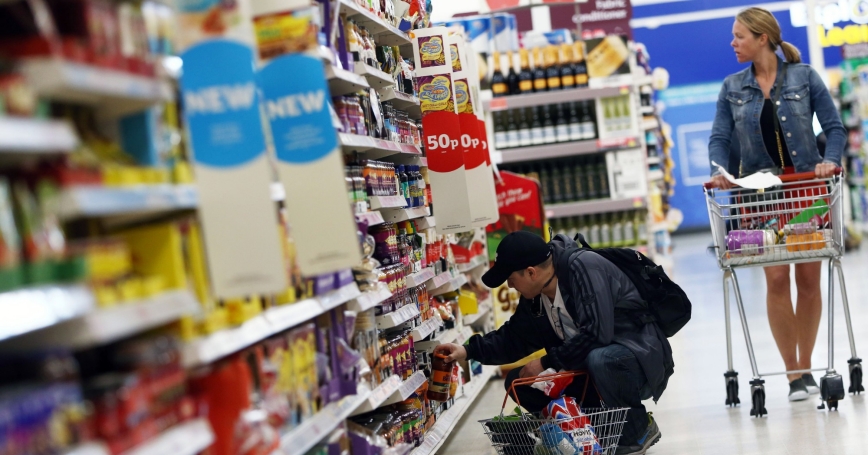 Shoppers browse aisles in a supermarket in London, Britain, April 11, 2017

The United Kingdom took a major and necessary step in its fight against childhood obesity with its plan to banish so-called “guilt lanes,” so named because children pester their parents to buy the candy and junk food that permeate supermarket cash register aisles.

UK leaders recently announced they will remove candy from checkout lanes by the end of 2018 and also end promotional discounts for junk food—such as two-for-one specials. It's smart to target obesity at the point of purchase, the moment people make last-minute decisions about what to put in their shopping baskets or directly into their mouths. When people choose food impulsively, they tend to pick items that are higher in sugar and fat.

A recent report by members of the UK Parliament also recommends banning advertising foods high in sugar and salt on television before 9 p.m. Limiting messages that remind people that it's “always time to eat” can also help them avoid feeling hungry and overeating.

The UK's proposed approach that addresses the retail experience and advertising is innovative and a good foundation for the types of policies necessary to rein in obesity in the United Kingdom and in countries across the world.

When people choose food impulsively, they tend to pick items that are higher in sugar and fat.

Nearly 2 billion adults and 340 million children are overweight or obese, according to the World Health Organization. Yet scientific evidence regarding how to best mitigate the conditions that lead to obesity is lacking. A concerted effort has not been made to identify the attributes of an ideal food environment that does not foster obesity. A “food environment” is comprised of the outlets where food is obtained—grocery stores, restaurants, vending machines—and the marketing and advertising messages that promote food consumption.

To accelerate change in the food environment, a network of experimental supermarkets and restaurants could be set up that would allow scientists to empirically determine how food displays, promotion, and service influence what and how much consumers eat—with the ultimate goal of identifying mechanisms that would help consumers choose to follow a healthier diet.

The prevailing science of what drives food choice has been primarily developed by the food industry to increase profits. Marketing literature shows that people purchase more when food is discounted, displayed in salient positions (like at checkout or end-of-aisle displays), at eye level and in multiple locations, and when it is attractively packaged with recognizable imagery. Science also has shown that when people are served too much they eat too much, so there's a need to figure out how to serve smaller portions that will still allow people to feel satisfied at the end of a meal.

The checkout stand is an especially vulnerable place for shoppers, who can often be overwhelmed by the vast selection and stimuli in the store and have difficulty consistently making wise decisions that include resisting that package of chips or chocolate candy bar. Seeing tempting food can make people feel hungry and crave foods, even when they do not need to eat.

Without hard evidence regarding what works in retail to drive healthy food choices and limit excessive consumption, progress will likely be slow, and governments may be implementing policies that address only a slice of the equation. Addressing just one or two factors, such as selling candy at the cash register, may only deal with part of the problem when other elements, like the display of junk foods in half of all end-of-aisle displays, could be just as or more powerful in undermining a healthy diet.

Working on such a vast problem piecemeal is better than doing nothing, but what's really needed is a comprehensive approach.

Working on solving such a vast problem on a piecemeal basis is better than doing nothing, but what is really needed is an integrated holistic and comprehensive approach to swiftly identify a more complete answer. Since the food industry lacks incentives to promote health over profits, it falls to the government to fund scientific analyses to help society understand the connection between retail management practices and consumer food choices. Research findings from experimental food outlets could help position policymakers, businesses and consumers to make evidence-based decisions.

Although 70 percent of Americans are now overweight or obese, society still clings to the mistaken belief that most individuals have the capacity to ignore and transcend a food environment that aggressively promotes extra-large portions, junk food and sugary beverages. Most people have not been able to overcome obesity on their own.

America would benefit from following the UK's lead in addressing the food environment. It could be the beginning of a broader research agenda to identify and replace marketing practices that hinder a healthy diet in favor of those that put the health and well-being of consumers front and center.

Deborah A. Cohen is a senior natural scientist at the nonprofit, nonpartisan RAND Corporation and the author of A Big Fat Crisis: The Hidden Influences Behind the Obesity Epidemic—And How We Can End It.