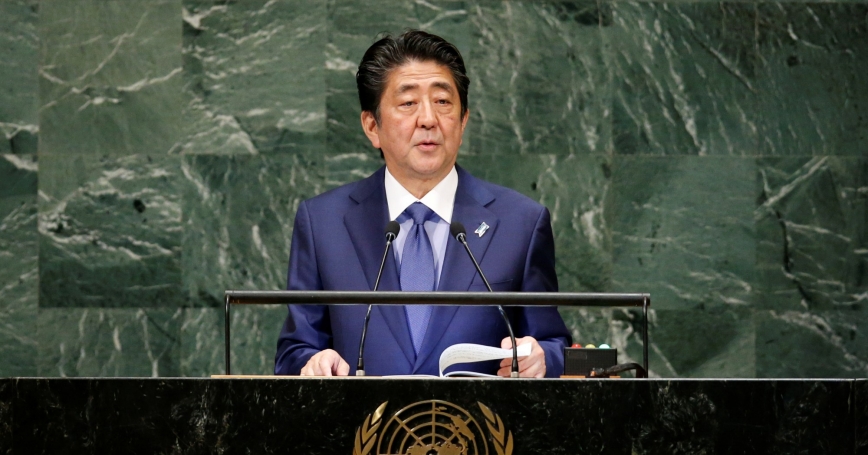 It is no secret that the liberal international order is in danger. Since the election of U.S. President Donald Trump in 2016, it has been clear that the United States is prepared to withdraw the military, economic, and political leadership that once underpinned the system. But there are still countries out there striving to keep it from crumbling. One of the most important is Japan.

To be sure, no single country can replace the United States. Rather, there will need to be several. It will be a “multiplex world,” as the American University professor Amitav Acharya has described it, where power and leadership are dispersed among a group of powers alongside other nonstate actors, including multilateral bodies, corporations, and social movements.

In such a system, regional actors will take on the major leadership roles. The European Union and Germany are plausible contenders in Europe. The same could be true of South Africa in sub-Saharan Africa and perhaps Argentina or Brazil in South America. But what about the Indo-Pacific region?

India is an unlikely candidate. Its own development challenges will distract it from exerting much power beyond South Asia. And although the Association of Southeast Asian Nations has a key role to play in managing security in Southeast Asia, it is unlikely to have any capacity to manage the international order in the wider Indo-Pacific region. Despite being an ardent supporter of many elements of the order, moreover, South Korea has proved too preoccupied with events on the Korean Peninsula to do much elsewhere. Finally, although China's sheer size makes it seem like a natural leader, its human rights abuses, flagrant violations of international law, coercion of neighbors, and attempts to build its own regional architecture make the country one of the world's largest threats to the liberal order.

That leaves Japan, a status quo power par excellence. Tokyo is highly satisfied with the current order because it has benefited the country greatly, ensuring the peace and stability Japan needed to recover and prosper after World War II. The various international organizations Japan has been able to join, moreover, have given it a louder voice and role in shaping international norms than it otherwise would have had. Tokyo has, in turn, built its international agenda almost solely around upholding and strengthening the liberal international order.

For decades, Japan has been a leading contributor of money and personnel to the United Nations, Office of the U.N. High Commissioner for Refugees, World Trade Organization, the International Monetary Fund, and the Asian Development Bank.

Meanwhile, not only does Japan proactively cooperate with international legal organizations such as the International Court of Justice (ICJ) and the International Criminal Court, but prominent Japanese legal scholars have long served as justices on the ICJ—a testament to the importance the country places on the rule of law. In fact, it was one of the first countries to recognize the ICJ's rulings as compulsory.

Under the current prime minister, Shinzo Abe, Japan's role in supporting the international order has been particularly notable. In 2016, Abe launched the “proactive contribution to peace” framework, an effort to push Japan to play a larger role in securing peace, stability, and prosperity. It was part of his broader Free and Open Indo-Pacific strategy, which the Trump administration later endorsed and which places more of the burden on Japan for protecting freedom, the rule of law, and market economies in the region.

The time may be right for Abe to go further. He was recently re-elected as the head of the ruling Liberal Democratic Party, which means he could remain prime minister until 2021. He could use that time to focus on strengthening partnerships in the Indo-Pacific region, where his country enjoys a relatively good reputation. Abe could signal that he is willing to allow others to lean on Japan to hold up the rules-based order. Japanese leadership might even entail dispatching more Japanese troops in noncombat roles to address threats to the international order. In addition to continuing to contribute actively to humanitarian assistance and disaster responses, Japan could be an active participant—even leader—in U.N.-mandated peacekeeping operations and responses to epidemics.

This is not to suggest that Japan needs to change its constitutional restraints on the use of force by its military or that Japan should take actions that run it afoul of the United States. Nor does regional leadership mean that Japan can ignore its own domestic challenges, namely demographic decline and ballooning debt. Rather, Japanese policymakers might simply consider that it is time for their country to fully embrace its role as a noncombat civilian power and become the predominant regional pillar of the international order. That would mean signaling a willingness to organize and lead groupings of like-minded states to reinforce the existing order across the Indo-Pacific region. Increasingly, Japan could even begin to shape the order around its own vision, although that vision would not likely stray too far from what the current order looks like. Strengthening the rule of law, freedom of navigation and free trade would no doubt remain Japan's primary focus.

Although Japan will never be able to exert global leadership in a way comparable to the United States, it might well decide to provide critical leadership to sustain key elements of the international order in the Indo-Pacific region. It has the power to do so: economically, diplomatically, technologically, ideologically, and even in noncombat military power. Japan's leadership would provide the critical support the order needs. And in doing so, Japan could very well shore up the confidence of those in other regions that want to do the same. The choice is Japan’s to make, but the consequences of the decision will be felt throughout the Indo-Pacific region and beyond.

This commentary originally appeared on Foreign Policy on October 30, 2018. Commentary gives RAND researchers a platform to convey insights based on their professional expertise and often on their peer-reviewed research and analysis.