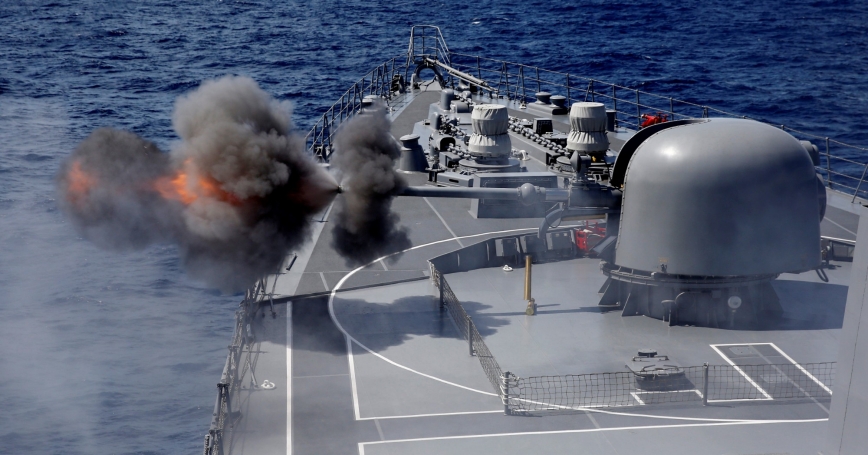 Shinzo Abe's victory over Shigeru Ishiba in the Liberal Democratic Party's leadership election cemented his position as Japan's prime minister for the next three years. Now in his third consecutive term in the top job, Abe is expected to make a concerted push for revising the Constitution, which has not been amended since going into effect in 1947. But despite Abe's popularity, his efforts are likely to fail due to the “invisible hand” of public opinion in Japanese security debates that constrain how far any leader can go at one time.

After a one-year stint in 2006-2007, Abe returned to power in late 2012 and has been a driving force of change since. While he campaigned on the economic platform dubbed Abenomics, his more significant successes have been in the security domain. The list of his accomplishments include: drafting Japan's first national security strategy; passing a state secrets law; reinterpreting the Constitution to allow the Self-Defense Forces to exercise the right of collective self-defense; and establishing a national security apparatus to conduct a top-down approach to diplomacy and security policies to enable Japan to make proactive contributions to peace.

In a country with a strong strain of pacifism, these achievements are quite remarkable. None of them were accomplished without controversy. Love him or hate him, it is hard to deny that Abe has left a permanent mark on Japan. But he is not finished. Even before coming into office, Abe set his sights on the one goal that no other prime minister before him has been able to accomplish: constitutional revision.

The Constitution was written by U.S. officers during the Allied Occupation of Japan following World War II. This fact has remained a source of contention for conservatives. One of their primary targets has been Article 9, or the so-called peace clause, which renounces war and the maintenance of “war potential.” Abe is not the first Japanese leader to want revision; his LDP has sought revision since 1955. But Abe is the first who may have the opportunity to succeed.

Despite the fanfare, Abe's goal is not that dramatic. He seeks to keep the current two paragraphs of Article 9 and add a paragraph to give explicit legal standing to the SDF. Opponents fear this will hollow out the pacifist ideals set out in Article 9. But the truth is Abe's proposed revision will not lead directly to any major changes in the SDF or Japan's defense.

So why is Abe doing it? To remove any question of a doubt that the SDF, which has more than 220,000 citizens who voluntarily join to defend their country from harm, is unconstitutional and to end pointless debates on its constitutionality that arise whenever security-related legislation is debated.

On paper, Abe's win means he has three years to fulfill his lifelong dream. But the political calendar suggests he may have even less time. Emperor Akihito is set to abdicate the throne next April, to be succeeded by his son, Crown Prince Naruhito. This abdication will take place the same month that unified local elections are held. Then, in the summer, Japan will host its first ever Group of 20 summit, the House of Councilors will hold an election and Yokohama will host the Tokyo International Conference on African Development (TICAD).

And of course, looking ahead, Japan will host the Summer Olympics in 2020. Not only will Abe and his administration be focused on the success of these events, the public will not have the bandwidth to focus on what would be history-making constitutional revision amid these other historic events. And as the end of his third term nears, he will increasingly become a lame duck prime minister. Given this, it is expected that Abe's LDP will begin drafting the language for revision this fall, as Abe has already urged his party to submit a draft to the Diet before the end of the year.

To succeed, Abe requires success in three stages. The first two stages are clearing both houses of the Diet with two-thirds support in each chamber. Currently, the LDP can do this in the Lower House if it can get the support from its junior coalition partner, Komeito. In the Upper House, however, the LDP will require the help of other micro-parties or independents who support revision. But passage through these chambers is not guaranteed given the expected opposition from within the coalition itself, particularly Komeito.

The party has generally avoided direct opposition with the LDP by saying that much of the public already supports the SDF's activities without having to revise the Constitution. And recently Komeito leader Natsuo Yamaguchi stressed that not only should the coalition take a calm look at the degree of relative priority of where constitutional revision sits among prioritized political problems, but that it is important to take into consideration the reactions of both the public and the opposition parties. This may not seem like opposition, but for the leader of a coalition party in Japan, this is signaling strong discomfort.

Assuming for the sake of argument that Abe can convince Komeito to pass the amendment, once it passes both Diet chambers the amendment would need to be approved by a simple majority in a national referendum by voters. And this is where it would likely fail.

Abe's longevity as prime minister and consistently high approval rates belie his greatest challenge in realizing his dream: The public is not convinced of the need to revise the Constitution. Polls show that no clear majority supports Abe's efforts. The liberal-leaning Asahi Shimbun has conducted surveys showing that only 31 percent support Abe revising the Constitution. The conservative Yomiuri Shimbun, by contrast, finds that only 45 percent support a revision that stipulates the existence of the SDF in the Constitution.

While Abe's goal to provide an explicit legal basis for the SDF is honorable, it is politically risky. Without Komeito and the public on board, his effort appears doomed from the start. And with failure, Abe may be forced to resign. Worse, if the public referendum fails, it could provide ammunition to opposition voices who argue the SDF is unconstitutional. We know Abe wants revision. But despite his many successes as prime minister, this one will likely elude him.

This commentary originally appeared on The Japan Times on October 3, 2018. Commentary gives RAND researchers a platform to convey insights based on their professional expertise and often on their peer-reviewed research and analysis.