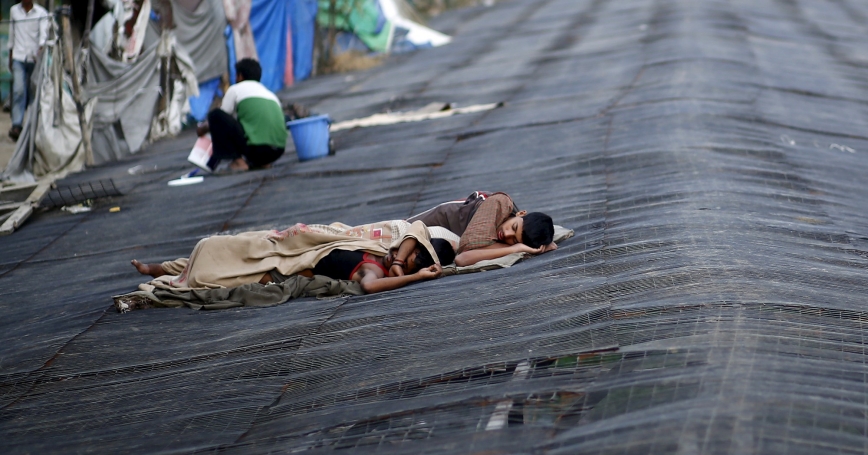 Men sleep on a temporary shade built over a drain next to a slum on a hot summer day in New Delhi, India, May 28, 2015

The record-setting heat that blanketed the planet this summer was a sticky reminder that as global temperatures increase, people on the margins of society—the sick, the elderly, and the poor—will suffer disproportionately. And, nowhere will this suffering be more acute than in India.

Poverty entraps more people in India than any other country. With some 270 million Indians (PDF) living below the World Bank's poverty line of $1.90 a day, escaping the elements has never been easy. Now, climate change and extreme weather are making it impossible.

In cities, the poor must contend with the effects of “heat islands”—developed areas that trap the sun's warmth and make temperatures significantly hotter than in rural regions. During heat waves, urban temperatures in India can be extreme even at night, making sleeping agonizing for those without proper shelter or modern cooling methods.

But life is no easier for India's rural poor, who are more vulnerable to extreme heat because they often lack access to water, electricity, and health care. Based on research that I conducted with colleagues at the RAND Corporation, Emory University, and health departments in India, impoverished communities in central India are at the highest risk, as are populations that are less educated and have fewer amenities. Our country-wide index shows a strong correlation between low-income status in rural areas and heat vulnerability.

Unfortunately, the perils for the region's poor are mounting. According to a recent report by the World Bank, some 800 million people in South Asia currently reside in areas where rising temperatures and erratic rainfall are threatening livelihoods and reducing living standards. If these trends continue, the goal of ending extreme poverty—one of the top objectives of the United Nations 2030 Agenda for Sustainable Development—will remain elusive.

Many rural Indians withering under the heat now see urban migration as their best option. But this, too, will fail to bring lasting relief. Although jobs may be more plentiful in cities, India's largest metropolitan areas are already bursting; adding millions of climate refugees to underdeveloped slums and shantytowns would be catastrophic. To avert this new crisis, the Indian authorities must recognize that with heat risks rising, the country's poor—urban and rural alike—are in desperate need of climate-adaptation strategies.

To be sure, there are no easy solutions. When heat waves hit developed countries, the authorities advise people to stay indoors, shower often, drink plenty of fluids, and keep cool with fans and air conditioning. But such guidance is of little use for people whose homes lack running water or power. The World Bank estimates that one in five Indians is poor, while only 61% of poor households have reliable electricity and just 6% have access to tap water.

Moreover, most of India's working poor toil as farmers or in small-scale urban manufacturing; for them, escaping the heat means forgoing a paycheck. But this is an impossible choice; while the science of heat-related health damage is in its infancy, studies have linked exposure to extreme temperatures with kidney disease, micronutrient deficiencies, and even cognitive damage

Still, there are things that Indian authorities can do to protect the poor during heat waves. For example, community showering centers have been proposed as a way to lower heat-related deaths. While this option would be difficult to implement in areas with chronic water shortages, government-led distribution programs have worked elsewhere.

Technological solutions are also worth exploring. For example, medical researchers in Bangalore have created a battery-operated cooling jacket designed to protect people who must work in the heat. Of course, with a $27 price tag, the device is beyond the means of most of India's poor. But other solutions—including installation of solar panels to power cooling systems, and wider use of “green” roofs to help deflect heat (PDF)—would be easier to scale up.

But the most consequential change of would be to give India's poorest a greater voice. Too often, people working to end poverty are unfamiliar with the conditions in which the poor live. For climate-resiliency programs to be effective, the target audience must become part of the solution.

Despite years of dire forecasts, the international community has been unable to halt the steady climb in global temperatures, and it is the world's poorest who are paying the heaviest toll. As heat-related risks intensify, those living on the margins—in India and elsewhere—will need more than pity to cope effectively.

Gulrez Shah Azhar is an assistant policy researcher at the RAND Corporation and a doctoral candidate at the Pardee RAND Graduate School.

This commentary originally appeared on Project Syndicate on October 11, 2018. Commentary gives RAND researchers a platform to convey insights based on their professional expertise and often on their peer-reviewed research and analysis.