Measuring Progress Toward a Culture of Health... at the Library 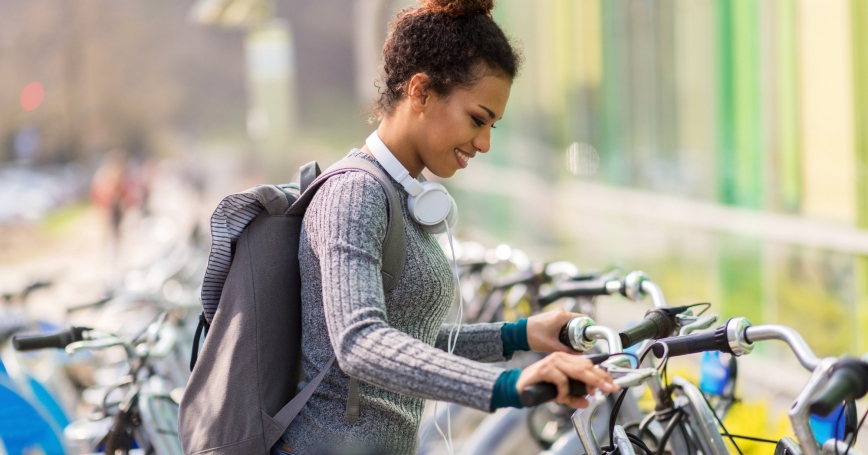 by Carolyn Miller and Anita Chandra

In Hundred, West Virginia, many homes sit at the end of gravel driveways off gravel roads—not the easiest place for people to walk. And in this low-income rural town of 300 people, many don't even own bikes, much less ride them around town.

When Tina McBee became director of the local public library in 2017, she decided to change that. “I had been in other towns where you can use your credit card to rent bikes for the day and thought, we could do that at the library,” McBee says. The building itself sits right off a rails-to-trails path, so providing bikes would be a natural way to encourage more exercise for the more than 2,900 people, including those in nearby communities, whom the library serves. That's especially important in a state like West Virginia, McBee said, which is known for its high obesity rates (PDF).

Now, thanks to her efforts, patrons of the Hundred Public Library can check out one of the eight bikes, including a tandem, as well as helmets, horns, bells, and even a baby trailer—for free.

“Libraries are so much more than just books,” says McBee, who sees their role as shifting more and more to asking: “How can we help the community?”

For the Robert Wood Johnson Foundation (RWJF), that evolution fits squarely into its Culture of Health vision. In fact, the number of libraries per 100,000 population is one of 35 national-level measures—ranging from walkability of a locality to reductions in racially segregated housing to voter participation—that we believe should be monitored as important signals of progress toward a nation where everyone has a fair and just opportunity to live a healthy life.

Those measures are refined and explained in Moving Forward Together, an updated version of the RWJF's framework for building and measuring a Culture of Health. The report, produced with the RAND Corporation, reflects what we've learned from partners and allies across the country since its first release in 2015—most particularly, how the Culture of Health Action Framework and measures are understood and used by stakeholders across health, education, transportation, and other sectors and across different disciplines.

We've worked with community leaders, researchers, advocates, planners, and others to make sure these updated measures meet rigorous standards, are good signals of progress, and illustrate what we believe are important drivers of health, well-being, and equity.

Libraries' Link to a Culture of Health

How are libraries linked to a Culture of Health? They provide not just information, but also safe spaces for social interaction, child and adult learning programs, and places of refuge during heat waves, storms, and disasters. They also provide internet access that allows patrons to apply for jobs, do research and school work, or apply for college. And, increasingly, libraries are serving as places for physical activity and nutrition programs.

Increasingly, libraries are serving as places for physical activity and nutrition programs.

Noah Lenstra, an assistant professor of library and information studies at the University of North Carolina at Greensboro, has reported that more than a dozen communities around the United States are allowing residents to check out a bicycle at a library. Branching out from roles defined by books, many libraries also are starting to address food insecurity, he says. In Ohio, for example, 10 percent of the summer feeding sites are public libraries, according to Lenstra.

Libraries' expanded roles also increase the number and quality of community partnerships, a key driver of a Culture of Health. For example, in Mansfield, Ohio, the library partnered with Richland Public Health (the county public health department) and Richland Moves to offer bikes. The library in Bethlehem, Pennsylvania, joined with the local health network, the city government, a bike shop, and advocates for active transportation to build up the bike-share collection. In both examples, bikes are available at no charge.

In a 2017 blog post, Brookings Institution researchers Marcela Cabello and Stuart Butler noted how much the residents' trust in libraries and their focus on access have increasingly led them to a “hub role in the community—using partnerships with other institutions to connect people with services and help.”

In 2016, Health Affairs published a study saying that libraries have “untapped potential to improve population health.”

In Philadelphia, Pennsylvania, for example, librarians are trained as “community health specialists,” and libraries offer programs and assistance for people of all ages and socioeconomic backgrounds. These community health specialists' work ranges from providing counseling to connecting library users to support they need, including medical care, mental health care, and social services. Library staffers provide intensive support like this to vulnerable populations, including people who are homeless, those with mental illness or substance use disorder, recent immigrants, and children and families suffering from trauma. In 2015, almost 10 percent of the Philly libraries' nearly 6 million in-person visitors accessed specialized programs and assistance in nutrition, trauma and mental health resources, youth leadership, and healthy behaviors.

We applaud these evolving libraries, and we hope all of the measures we've put forward in our report will spark dialogue, collaboration, and positive change in communities across America. We know that lasting improvements in health, well-being, and equity will take a generation—and that none of us can get there alone.

Carolyn E. Miller is a senior program officer in the Research-Evaluation-Learning unit at the Robert Wood Johnson Foundation. Anita Chandra is vice president and director of Social and Economic Well-Being at the nonprofit, nonpartisan RAND Corporation.