What Does America's Political Polarization Mean for Competition with China? 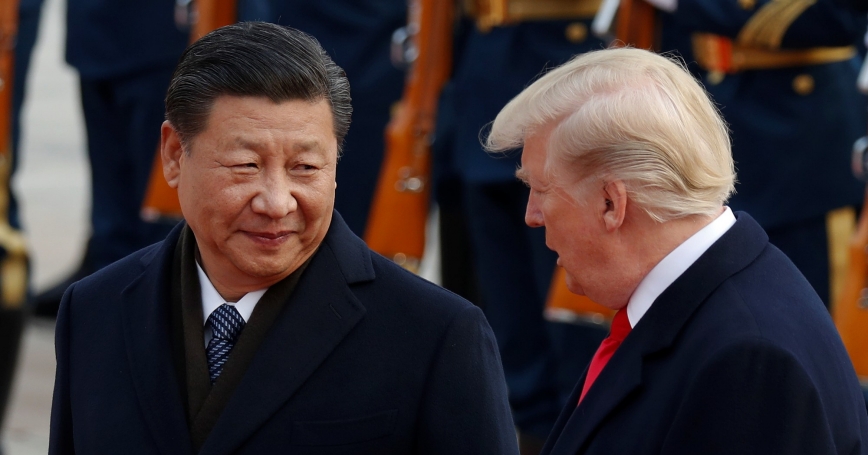 U.S. President Donald Trump with China's President Xi Jinping at the Great Hall of the People in Beijing, China, November 9, 2017

Americans, facing levels of acrimonious polarization not seen since the Civil War, may understandably worry about the health of the country's democratic institutions.

However, the consequences of partisan rancor may also stretch beyond domestic politics. Already, some experts warn that “political dysfunction” is becoming a national security concern.

In a political environment in which America's two parties agree on very little, the challenge posed by China enjoys surprisingly broad bipartisan support. A Pew poll showed a relatively narrow partisan gap on the issue of China compared to other issues, with similar trends in both parties over time.

Democrats may disagree on trade tactics, but they largely agree with President Trump's efforts to step up pressure on China across a broad range of issues.

Under President Trump, the United States passed a $60 billion aid program aimed in part at countering China's Belt and Road Initiative to integrate the Eurasian landmass.

But unity on the challenge posed by China can do little to overcome deep fissures in American society. Political polarization has reached levels not seen in decades, with nearly one-third of people in each party describing the other party as a threat to the nation's well-being. Trust in all institutions, including media, government, and business has fallen considerably.

Intense partisan feuding imposes a severe obstacle for national leaders who are seeking to enact strategically valuable, but politically contentious measures to compete with China.

President Trump has abandoned the TPP, but his provocative leadership style has demonstrated how striking an aggressive public stance toward China can mobilize public opinion and bipartisan support for other politically controversial policies, such as restrictions on trade and access to U.S. technology.

Polls suggest over 55 percent of Americans now view China negatively, a notable shift from previous years, when China's unfavorability remained below 50 percent for most of President Obama's tenure.

Mobilizing public opinion against China may ease the passage of contentious policies, but they carry their own risks. As strains deepen and mutually hostile rhetoric intensifies, the risks of a military crisis may be increasing.

The effects of polarization could impair rapid and bold decisionmaking in the event of a crisis.

Close encounters between military platforms of China and the United States have occurred before, but the hostile political atmosphere raises the danger of miscalculation in incidents like the near collision of a Chinese warship with the U.S.S. Decatur in late September.

Moreover, while the risks of a crisis may be increasing, the effects of polarization could impair rapid and bold decisionmaking in the event of a crisis. The politicization of foreign policy developments means politics no longer stops at “water's edge.”

Bipartisan cooperation may be achievable in peacetime when risks are low, but the fragile basis of bipartisan support carries an inherent danger of rupture in a crisis if one partisan side exploits controversial foreign policy actions for political advantage against the other—a dynamic well exhibited in the intense partisan rancor over the Iraq War and the U.S. 2011 intervention in Libya.

U.S. leaders thus could face cross-cutting political and strategic incentives for action in a crisis, raising the risk of decisionmaking paralysis.

To address these vulnerabilities, national leaders could work harder to engage both domestic audiences and international allies and partners. Greater efforts to mobilize support and educate domestic constituents could help ease passage of strategically valuable, but politically sensitive, measures like regional trade pacts.

One need not agree with either President Trump's rhetoric or his specific policies to recognize his achievements in raising popular awareness of the stakes of the broader strategic competition with China.

Similarly, closer cooperation with U.S. allies and partners may also facilitate U.S. efforts to strengthen its strategic position internationally. In July, the United States, Japan, and Australia agreed on a plan to invest in countries across the Asia-Pacific to counter China's growing regional clout.

An encouraging development on this front involves the “Five Eyes” alliance including Australia, Britain, Canada, New Zealand, and the United States, which has expanded a coalition for intelligence sharing purposes with Japan and Germany.

In coming years, U.S. leaders will need to work even harder to mitigate the effects of political polarization and manage competition with China in a stable, effective manner.

Timothy Heath is a senior international and defense research analyst with the nonprofit, nonpartisan RAND Corporation.

This commentary originally appeared on The Hill on November 8, 2018. Commentary gives RAND researchers a platform to convey insights based on their professional expertise and often on their peer-reviewed research and analysis.