No Russian Let-Up on Ukraine 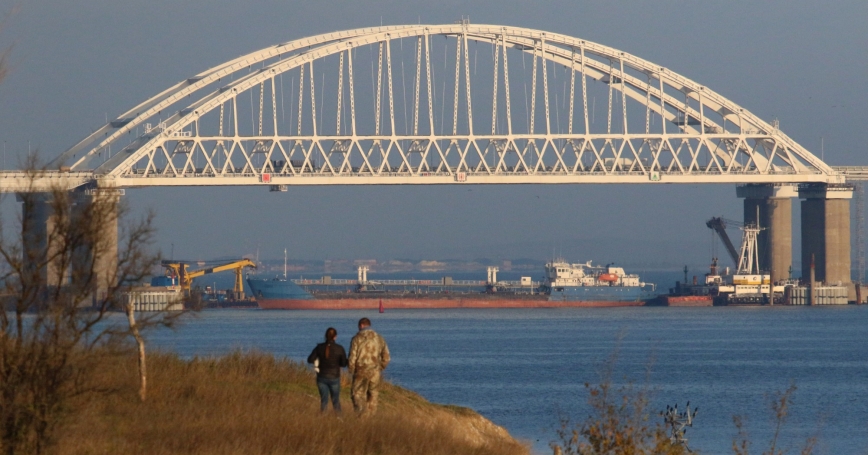 A Russian cargo ship beneath a bridge connecting the Russian mainland with the Crimean Peninsula after three Ukrainian navy vessels were stopped by Russia from entering the Sea of Azov via the Kerch Strait in the Black Sea, Crimea, November 25, 2018

by William Courtney and Bradley Martin

Russia cannot seem to shake its obsession with Ukraine. Starting in 2014, Moscow's seizure of Crimea and war in eastern Ukraine have led the West to sanction Russians and expand aid to Ukraine, and NATO to shift land and air forces eastward.

Expanded Russian coercion, including the seizure of two Ukrainian gunboats and a tug in the Kerch Strait, and detention of their 24 sailors, may draw more NATO naval power closer to Russia's shores and lead to tougher sanctions.

Why is the Kremlin picking a new fight?

Perhaps Moscow thinks naval coercion will give it leverage to negotiate an end to Ukraine's economic blockade of Crimea and a resumption of Ukrainian water supplies to it. But the Kremlin has not given public priority to such talks.

Perhaps the Kremlin is seeking to bolster President Vladimir Putin's political fortunes after a pension reform that sparked public protests. A poll published in October found that 58 percent of Russians trusted him, down from 75 percent last year.

Perhaps Moscow is trying to weaken Ukraine and show it to be a failing state. But Ukraine is recovering. In October the International Monetary Fund predicted that this year economic growth in Ukraine would be double that of Russia (3.5 vs. 1.7 percent).

Or perhaps the Kremlin thinks naval pressure will help Russia take effective control of a wide swath of eastern and southern Ukraine. In spring 2014 Putin implied this goal by saying the region—seized by Catherine the Great—was not part of Ukraine.

Russia does seem to want military control of the Sea of Azov, despite a 2003 Russian-Ukrainian accord that ships of both states have a right of “free navigation” there. Ukrainian ports on the Sea are a lifeline for export of bulk commodities, such as coal, metals, grain and fertilizer.

The persistence and scale of Russian coercion will affect Western countermeasures. Likely ones fall into three categories: sanctions, commercial and maritime.

Since 2014 the West has made liberal use of sanctions. They require little government funding but can have big impact. A recent study by Bloomberg Economics found that sanctions may have reduced Russia's GDP by up to 6 percent over the past four years.

Soon the U.S. is expected to announce new sanctions in response to Russia's violation of the Chemical Weapons Convention. A U.S. law requires sanctions over the use of a banned nerve agent in the attack last March on former Russian spy Sergey Skripal. The Kerch Strait crisis or other Russian coercion could give impetus to two sanctions bills pending in Congress.

U.S. and other Western military training and equipping efforts have enhanced Ukrainian land forces. In light of Russia's naval challenge, the West could offer training to Ukrainian sailors and over time provide Ukraine with patrol ships capable of delivering anti-ship cruise missiles and greater maritime surveillance capacity. Even so, over any reasonable time horizon, Ukraine will not be able to compete on the scale of Russia's large Black Sea Fleet supported by its major base at Sevastopol.

The U.S. Navy has increased its presence in the Black Sea over the past two years as Russia has deployed more warships there, particularly submarines. This year NATO warships have spent 120 days in the Black Sea versus 80 in 2017.

Within the constraints of the 1936 Montreux Convention, which bans permanent naval stationing in the Black Sea by non-littoral states and imposes other limits, the U.S. and other allies could further expand rotations of warships in the Black Sea. Destroyers and other ships having strong defense and anti-ship missile capabilities could be a good option. More patrols may help to deter further Russian naval adventurism.

The Kremlin may not want Ukraine to bolster its coastal defenses or NATO ships to steam more often in the Black Sea, but its actions could lead in this direction.

William Courtney is an adjunct senior fellow at the nonpartisan, nonprofit RAND Corporation and was U.S. ambassador to Kazakhstan, Georgia, and a U.S.–Soviet commission to implement the Threshold Test Ban Treaty. Brad Martin is a senior policy researcher at the RAND Corporation and Captain, USN (retired).

This commentary originally appeared on Fox News Channel on December 7, 2018. Commentary gives RAND researchers a platform to convey insights based on their professional expertise and often on their peer-reviewed research and analysis.