The Good and Bad of the Trump Administration's New Africa Strategy 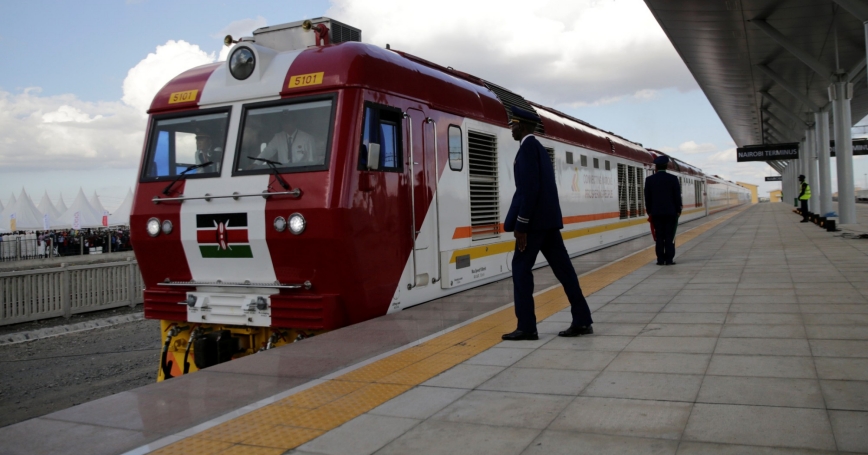 A train launched to operate on the Standard Gauge Railway line constructed by the China Road and Bridge Corporation and financed by Chinese government arrives at the Nairobi Terminus on the outskirts of Nairobi, Kenya, May 31, 2017.

Bolton identified “three core U.S. interests:” promoting U.S. economic interests in Africa, countering Islamic extremist terrorism and ensuring that U.S. taxpayer dollars devoted to aid and U.N. operations in Africa are not wasted. All of these are sound.

Increasing economic ties could be a win-win for the U.S. and African nations alike, and the implied demotion of counterterrorism is welcome given the extent to which it distorted American relations with African partners, militarized them and arguably encouraged overreactions to perceived threats.

Bolton, moreover, described a vision of America's engagement with Africa that would empower African countries as independent states to be self-sufficient and prosperous, something that, if taken at face value, is hard to quarrel with.

Bolton even went so far as to call for partnering with countries that were serious about governance, the rule of law, health and education, insisting that the administration would not allow taxpayers' money to be spent on “corrupt autocrats.” It was, he argued, in America's interest to have good partners, not bad ones.

The problem with his speech was an implied fourth priority that appears to overshadow all others, that of competing with China and Russia for influence.

The topic came up amid his discussion of commercial interests, which he used as a platform for diving into a relatively lengthy discussion about “predatory” Chinese and Russian practices.

Neither country, he argued, had Africans' interests at heart, and their practices led not to development and self-sufficiency but servility, primarily as a result of crushing debt. America wanted Africans to be free, he basically said, while China and Russia would have African countries captive.

Bolton's allegations about the motives of China and Russia may be true, although he may be overstating the case. China in particular has been promoting large infrastructure projects all across the continent, generally without regard for the corruption or human rights abuses of their partners, and often loading client countries with massive debt.

Bolton, however, describes Chinese activities in terms of the “strategic use of debt” to hold African states “captive” to Chinese strategic objectives. Chinese investments already have had some negative consequences for African partners (as have Western investments).

Bolton cites Zambia as an example, and indeed Zambia risks losing a great deal of its sovereignty and wealth because of its severe indebtedness to China. However, it is debatable whether China is so nefarious as to desire such an outcome and seek to use debt to “entrap” African nations.

Russia, for its part, has been providing arms and security-related services apparently in exchange for access to some commodities, most notably in the Central African Republic, a traditional stomping ground for the French Army that now is host to Russian mercenaries.

Bolton describes Russia as seeking to enhance its influence by engaging in “corrupt economic dealings,” with little regard for human rights or the rule of law. Russia “continues to extract natural resources…for its own benefit” and acts in ways “counter to the best interests of the African people.”

Africans may laugh at the notion of American aid being in Africans' interests and contributing to independence as the argument could be made that Western financial institutions such as the World Bank and the International Monetary Fund diminished African nations' independence.

Africans are well aware of the pain that resulted from the various “structural adjustments” imposed on African states by these institutions in exchange for financial assistance.

They imposed austerity budgets that arguably crippled the provision of services by many governments and led to less development, not more, even if the macroeconomic theory behind them was sound.

That Western lenders may have had good intentions is not obvious to Africans, who in any case are unlikely to accept Bolton's assertion that the Chinese and Russians are the “bad guys.”

The real danger, however, lies in the tension between Bolton's ostensible interest in promoting governance and independence and the focus on "great power" competition.

During the Cold War, two things happened. One is that the American preoccupation with competition with the Soviets gravely limited policymakers' and analysts' interest in and ability to see Africans except through that lens.

Many Africans at the time perceived that the United States was not really interested in them; likewise, they will likely have no illusions about American government interest in them moving forward, particularly if the administration is so up front about how America's interests come first, as Bolton emphasized, and how great power competition is the real driver behind U.S. engagement with them.

Second, when forced to choose between realpolitik and concern for niceties like governance, democracy and human rights, more often than not during the Cold War, the United States did the practical thing.

That was also the case after 9/11 when the United States, particularly in Africa, valued support for its counterterrorism agenda over all else. Africans can hardly be blamed should they assume that this will be the case again.

Bolton's turn away from counterterrorism as the priority, his emphasis on trade and his rhetoric of working to help Africans solve their own problems and become more capable, encourage governance and protecting African countries' independence could constitute important opportunities for crafting a more positive relationship with the continent.

The implied prioritization on great power competition, however, suggests the real risk of a return to Cold War-era approach.

The Chinese appear to have a clear strategy regarding what they want to achieve in Africa, one that features helping Africans achieve development goals largely by financing infrastructure projects in exchange for access to resources and heightened influence and stature on the world scene.

Russian strategy appears more modest, but could be worrisome as well. In contrast, the United States appears only to have a reactive set of objectives: fighting terrorism, and above all, ensuring that China and Russia do not achieve what they want.

This commentary originally appeared on The Hill on December 20, 2018. Commentary gives RAND researchers a platform to convey insights based on their professional expertise and often on their peer-reviewed research and analysis.