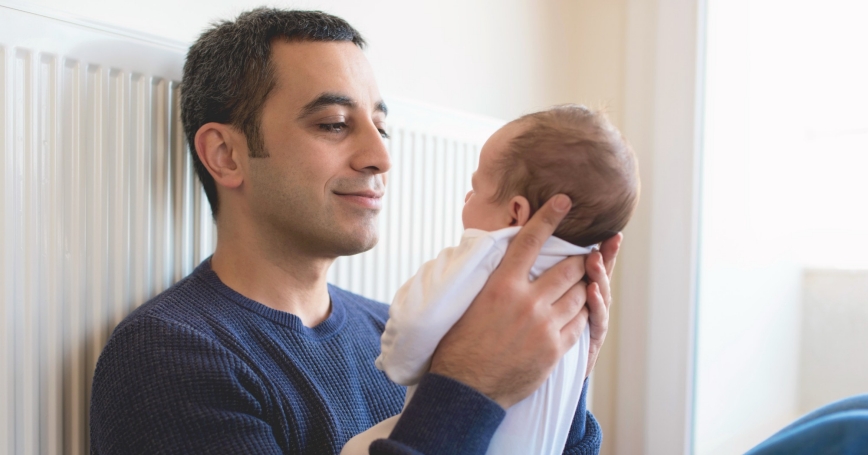 by Barbara Janta and Katherine Stewart

Parents are the first role models for their children. The active involvement of both a mother and a father in the upbringing of a child has great social and psychological benefits. Yet, despite legal provisions allowing parents to take time off to look after children, such as parental leave, many men are still reluctant to take it.

A policy brief on parental leave policies and practices, written by RAND Europe researchers for the European Platform for Investing in Children project, explores why this is the case.

Taking 'daddy only' parental leave is important. This is the time when fathers can develop better relationships with their children and learn parental skills, such as how to feed a baby or get a baby to sleep, or what to do when a child has a fever. The time spent caring alone for a child is what helps men become better fathers. Ultimately, fathers involved in their children's lives have longer, healthier lives (PDF).

There is also evidence that fathers' participation in their children's lives from birth has positive, long-lasting outcomes for child development, such as improved cognitive and emotional outcomes and physical health.

Greater involvement of fathers in childcare also has benefits for women. Acknowledgment by employers that both mothers and fathers have caring responsibilities can lead to improved gender equality in the labour market. When fathers take time off to look after children, such as when a child is sick, workplace flexibility stops being a 'mother's issue'. It becomes a workplace imperative and an issue for men too. This more equal share of professional and domestic responsibilities has, in turn, a positive impact on work-life balance in families.

Paid leave also has a positive effect on businesses as it promotes employee retention, increases morale and productivity, and reduces absenteeism and staff turnover.

With so many benefits, why are fathers still not taking full advantage of parental leave provisions? As our policy memo points out, several factors are playing a role.

Secondly, even when the legal provisions are in place, there are many psychological and social factors that can prevent fathers from taking longer periods of parental leave. In general, longer periods of absence from the workplace restrict career and earning opportunities. Many fathers fear that if they take on more childcare responsibilities and work fewer hours, they would be seen by their employers as unreliable, not sufficiently committed to their work duties, and would simply not earn enough. This financial worry is often justified as in many countries parental leave is not compensated well, if at all, and this discourages fathers from taking it.

However, when fathers do not take parental leave, it reinforces women's role as the primary caregivers and fathers as the primary breadwinners. In order to change this social attitude, some legal provisions are necessary that would allow both parents to share parental and professional responsibilities more equally.

Evidence from across several countries clearly indicates that the most successful parental leave schemes operate when the legal provisions encourage men to take it. For instance, this encouragement can operate by reserving at least part of a leave provision as an individual right for a mother and a father without the possibility of transferring it to the other parent. Another way of motivating both parents to take leave is to make the length of leave available to mothers dependent on the length of leave taken by fathers. Consequently, when a father does not take part of his individual leave entitlement, the whole family will lose out as it will not be eligible for the full amount of leave available. Put simply – when the leave provision operates on a 'use it or lose it' basis, more fathers take parental leave because when they don't, their children will spend less time with both parents.

In 2017, the European Commission (EC) adopted a proposal for a Directive on Work-Life Balance for Parents and Carers, with an objective to enable parents and carers to balance their professional and family responsibilities, and to encourage a more equal sharing of caring responsibilities between women and men.

On January 24 this year, the European Parliament and the Employment, Social Policy, Health and Consumer Affairs Council reached a provisional agreement on the EC's proposal. This agreement set a European minimum standard of 10 days of paternity leave for fathers following the birth of their child, compensated at the level of sick pay. The existing right to four months of parental leave has been strengthened by making two months non-transferable between parents (in essence reserving two months for a mother and the other two months for a father), and introducing compensation at a level to be determined by the member states. There is still hope that this directive will be approved before the European elections in 2019.

With the legal provisions moving in the direction of a greater work-life balance in families, hopefully more fathers will be encouraged to be involved in their children's lives. And this in turn could increase social acceptance that taking parental leave is not just the responsibility of mothers. It is vital that these changes become entrenched as the benefits for children and their parents are so many.

Barbara Janta is a senior analyst and Katherine Stewart is an analyst in the Home Affairs and Social Policies research group at RAND Europe. They are both involved in research for the European Platform for Investing in Children (EPIC).

This commentary originally appeared on E!Sharp on March 1, 2019. Commentary gives RAND researchers a platform to convey insights based on their professional expertise and often on their peer-reviewed research and analysis.