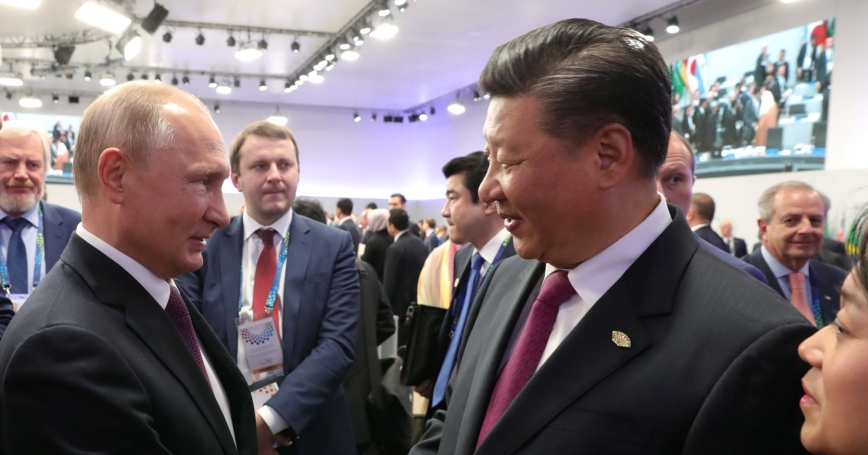 U.S. Director of National Intelligence Dan Coats observed (PDF) in the intelligence community's most recent threat assessment that “China and Russia are more aligned than at any point since the mid-1950s.” Although U.S. observers have feared such an alignment for decades, there is ample evidence that relations between the two are indeed closer than they have been since the Sino-Soviet split in the early 1960s.

According to Chinese government data, bilateral trade grew from $69.6 billion in 2016 to $84.2 billion in 2017 to $107.1 billion last year, marking the first time that that figure surpassed $100 billion. Moreover, despite facing setbacks in diversifying away from the U.S. dollar, Beijing and Moscow are conducting more of that trade, albeit still in small amounts, in their own currencies.

Russia became China's largest supplier of crude oil in 2016, displacing Saudi Arabia, and it is contracted to sell China 1.3 trillion feet of cubic gas annually for three decades, beginning this year, through its Power of Siberia pipeline.

Finally, Chinese President Xi Jinping has visited Moscow more than any other capital city since he assumed power. As of August 2018, he and his Russian counterpart Vladimir Putin had met 26 times. In June 2018, moreover, Xi gave Putin China's first-ever friendship medal, calling him “my best, most intimate friend.”

It is not surprising, then, that U.S. analysts are increasingly concerned by the multifaceted momentum in Sino-Russian relations. In a speech that he delivered at the Nobel Peace Prize Forum in Oslo in December 2016, former U.S. National Security Advisor Zbigniew Brzezinski (who passed away in 2017) warned that Washington “must be wary of the great danger that China and Russia could form a strategic alliance, generated in part by their own internal, political, and ideological momentum, and in part by the poorly thought out policies of the United States.”

“Nothing,” he concluded, would be “more dangerous” to U.S. national interests than such an outcome.

The United States should respond differently to a resurgent power focused on achieving economic and technological preeminence than to a declining power focused on fomenting military and ideological chaos.

In the face of strengthening ties between Beijing and Moscow, the White House's National Security Strategy and the Pentagon's National Defense Strategy would appear to treat them as similar strategic challenges. Unfortunately, though, acting on that depiction could hasten the very outcome Brzezinski warned about.

The NSS, for example, asserts (PDF) that both countries “challenge American power, influence, and interests, attempting to erode American security and prosperity. They are determined to make economies less free and less fair, to grow their militaries, and to control information and to repress their societies and expand their influence.” The NDS, meanwhile, contends (PDF) that “[t]he central challenge to U.S. prosperity and security is the reemergence of long-term, strategic competition by … revisionist powers. It is increasingly clear that China and Russia want to shape a world consistent with their authoritarian model—gaining veto authority over other nations' economic, diplomatic, and security decisions.”

While both countries certainly contest U.S. national interests, they do so in different ways. It is noteworthy that Coats distinguished (PDF) between the challenges that the two countries pose when he testified before the Senate Select Committee on Intelligence at the end of January: “Whereas with China, we must be concerned about the methodical and long-term efforts to … match, or overtake our superior global capabilities, Russia's approach relies on misdirection and obfuscation as it seeks to destabilize and diminish our standing in the world.”

There are several reasons to think about China and Russia separately. First, while their relationship is indeed growing across military, economic, and political dimensions, it is still more anchored in shared grievances than in common visions. Beijing and Moscow have long criticized America's support for universal values, the centrality of the U.S. dollar in global financial markets, and the U.S. presumption that countries with little to no involvement in designing the post-war order would ultimately integrate themselves into it of their own enlightened volition. It is more difficult, however, to identify what the contours of a shared Sino-Russian conception of world order would be; while they both avow the need for a more multipolar system, after all, few other countries would express a different desire, even longstanding U.S. allies in Europe and Asia. In addition, as Andrea Kendall-Taylor and David Shullman observed in October 2018, China and Russia are acting upon their grievances in ways that, while “synergistic,” remain “different and seemingly uncoordinated.”

Second, the economic gap between China and Russia is significant and growing rapidly. According to the World Bank, China's nominal gross domestic product in 1992 was slightly smaller than Russia's ($427 billion versus $460 billion). Just a quarter-century later, in 2017, it was nearly eight times as large ($12.2 trillion versus $1.6 trillion). Even though its economy is cooling, moreover, China's growth rate remains over four times that of Moscow's—a divergence that ensures that the imbalance between their power capabilities and the consequent gap between their abilities to fulfill global ambitions will grow apace.

While China holds the existing postwar order to be obsolescent, it has been the chief beneficiary of that system, perhaps excepting the United States. It presently seeks a gradual modification of that system, not a wholesale dissolution. In addition, as seen with the progression of the Belt and Road Initiative, China has the capacity to expand its commercial footprint globally, and it can credibly envision a Sinocentric trading and investment zone in Eurasia. With “Made in China 2025,” Beijing aspires to no longer be just an imitator of world-class technology, but a creator, and the growing reach of firms such as Huawei suggests that aim is plausible.

Russia, by contrast, does not have the economic wherewithal to pose a gradualist challenge, only the tactical savvy to be an opportunistic disruptor. A poor demographic outlook; declining and now mostly flat oil prices (the price of a barrel of crude oil is roughly half of what it was five years ago); and years of sanctions following its invasion of Ukraine and annexation of Crimea have all taken their toll. Where Moscow once hoped to serve as a flourishing economic intermediary between Western Europe and the Asia-Pacific, it is now focused on the much more modest goal of expanding the Eurasian Economic Union, which presently comprises Armenia, Belarus, Kazakhstan, Kyrgyzstan, and Russia. Its principal lines of effort—hiving off territory in its so-called near abroad, targeting democratic countries with disinformation operations, and leveraging and compounding Syria's bloodshed to consolidate its foothold in the Middle East—reflect the reality that Russia has little hope—or intention, it would appear—of reintegrating into the post-war order. Instead, Moscow seems to have concluded that it can demonstrate its influence more by destabilizing that system than by offering a coherent alternative.

While both countries seek to alter the status quo, then, only Russia has attacked neighboring countries, annexed conquered territory, and supported insurgent forces seeking to detach yet more. It also interferes in foreign elections and works to undermine European and Atlantic institutions. While China is no innocent abroad—it continues to militarize the South China Sea and has engaged in the forced repatriation of Chinese citizens from Hong Kong and several Asian countries—its growing influence derives primarily from more constructive measures such as trade, investment, and development assistance.

Lumping China and Russia together may well encourage them to work harder to undermine U.S. interests.

The aforementioned differences suggest that the United States should respond differently to a resurgent power focused on achieving economic and technological preeminence than to a declining power focused on fomenting military and ideological chaos. One could argue that China seeks to accelerate time; Russia, to reverse it. That is, where Beijing hopes to take its place as “the Middle Kingdom” in world affairs, Moscow waxes nostalgic for its former imperium. While this formulation may seem overly reductionist, it captures the disparity between China and Russia's respective capacities and ambitions: The relationship between the two countries is growing in importance as well as asymmetry.

If the United States continues to lump China and Russia together in undifferentiated hostility, it may well encourage them to work more assiduously and concertedly to undermine U.S. national interests. Nor is it likely to succeed in driving a wedge between them. Beijing has little incentive to join any effort by Washington to counterbalance Moscow, which is a reliable supplier of energy and military equipment. Nor does Russia pose a clear challenge to any of China's vital national interests. Russia, by contrast, has two immediate reasons to be apprehensive: China has displaced it as the principal economic force in Central Asia, and China seems increasingly intent on populating Russia's Far East with Chinese laborers. Over the longer run, moreover, as Moscow grows more dependent on China's economy, Beijing could increasingly impede Russian attempts to court China's neighbors as part of its “look east” effort. Still, unless Russia concludes that its path to long-term resuscitation is more likely to lie in rejoining the West than in bolstering its partnership with China, it may have to accept the indignity of ever-greater supplication.

The United States can hold Russia at bay by adapting updated versions of defense, deterrence, and alliance relationships that it and its Western allies employed against the Soviet Union during the Cold War, suggesting the importance of strengthening the U.S. alliance system. Washington cannot, however, contain China. It is in the realm of geoeconomics, rather than geopolitics, that the contest for world leadership is likely to be determined. America's success in this competition will be determined in large measure by how adeptly it operates in foreign markets and works with others to modernize an open, rules-based global economic order.

James Dobbins is a senior fellow, Howard J. Shatz is a senior economist, and Ali Wyne is a policy analyst at the nonprofit, nonpartisan RAND Corporation. They are the authors of the recent publication “Russia Is a Rogue, Not a Peer; China Is a Peer, Not a Rogue.”

This commentary originally appeared on The Diplomat on April 18, 2019. Commentary gives RAND researchers a platform to convey insights based on their professional expertise and often on their peer-reviewed research and analysis.