(Grey's) Anatomy of an Opioid Crisis 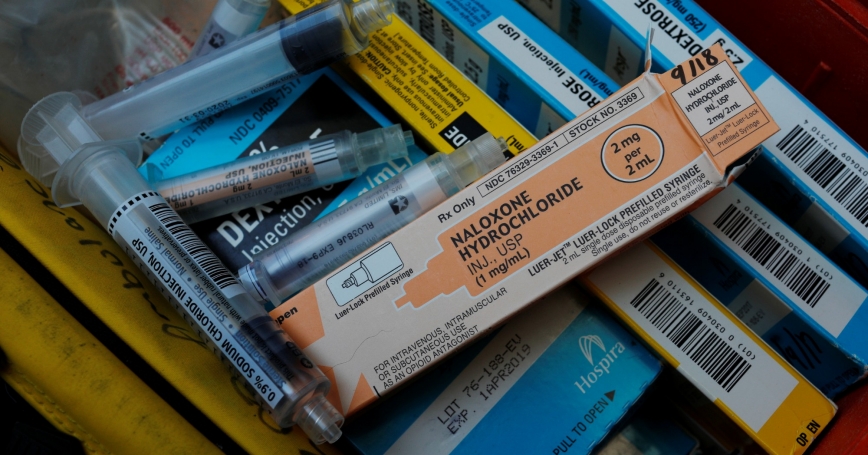 Used Narcan (naloxone hydrochloride) containers and syringes, after paramedics revived a man who overdosed on opioids in Salem, Massachusetts, August 9, 2017

More than 130 Americans die every day after overdosing on opioids, according to the National Institute on Drug Abuse. And the most recent statistics available show that more than 47,000 Americans died in 2017 as a result of an opioid overdose. So, when one of the most popular shows on network television made opioid misuse a major plotline, we paid especially rapt attention to how the show would present this public health crisis. How closely would it mirror reality? Pretty closely, for the narrow slice of the opioid crisis it addressed.

The story arc debuted a couple of weeks ago when more than 50 patients who overdosed on opioids at a nearby Seattle park end up at the fictional Grey Sloan Memorial Hospital. The episode illustrated that the opioid crisis knows no boundaries, showing a wide range of characters struggling with the disease—a young man, a homeless youth, a seemingly stay-at-home middle-class mom. Overwhelmed doctors shouted out orders that often involved using Narcan, the brand name for a drug called naloxone that can save a life by reversing the effects of an opioid overdose.

The opioids storyline continues the next week when two doctors with a potential love connection—it is Grey's after all—attend a medical conference. One will speak about prescribing opioids, the other is a recovering addict. Leading a session, Link, the orthopedic surgeon portrayed by Chris Carmack, recounts operating on a high school soccer goalie who injured his knee during a game and prescribing opioids for the pain. When the athlete died two years later in a car accident while under the influence, the doctor says he realized his unintentional role in the tragedy. Even knowing the outcome, the surgeon says he'd prescribe opioids all over again. Before he can explain how and why, the other Grey's doctor walks out.

The tension in that moment could represent the real-life tension across the medical and public health communities about whether opioids should be prescribed—and if so, how?

Given that the country is in the midst of the largest drug crisis in U.S. history, efforts to dramatically decrease the amount of opioids are widespread, with some doctors deciding not to prescribe opioids at all. The American Medical Association suggests that opioids continue to be a useful clinical tool for effective pain reduction, if prescription guidelines are followed.

Research is being conducted that could lead to improved prescribing and monitoring of opioids. For certain injuries and procedures, such as surgery, opioids have been proven to be effective pain relievers. Screening tools can help identify patients who might be at risk if they were prescribed opioids, including those with a history of substance use disorders or who show signs they might misuse the drugs.

If opioids are used, they should be prescribed conservatively—meaning using the smallest doses for as brief a period as possible to manage the pain.

Prescribers are supposed to first consider if non-opioid pain killers and other approaches to managing pain such as physical therapy and acupuncture might be effective. If opioids are used, they should be prescribed conservatively—meaning using the smallest doses for as brief a period as possible to manage the pain. And patients who require a longer-term opioid prescription are at higher risk for misuse and need to be monitored more carefully.

Putting these guidelines into practice can present challenges. Doctors who screen a patient for potential red flags, such as previous history with substance use disorders, may not have access to the patient's full medical history. Some patients struggling with addiction may choose to hide their pasts. Even those regarded as lower-risk candidates for misusing opioids might find that their doctor, who is often already stretched thin, has limited time to oversee what is a time- and resource-intensive process. And while there are a range of alternative approaches to manage pain that are effective, they may not be covered by insurance, further limiting patient access.

On Grey's Anatomy, the rest of Link's opioids presentation occurs off-camera, but it likely followed some version of the updated approach for prescribing opioids. When he shows up at the hotel room of his colleague, he says, “You missed the good part, the error of my ways and all that.” They vow to fight the opioid crisis together, and another Grey's romance takes flight.

Despite the usual soapy backdrop, the medical drama delivered a simple and powerful message about the pain-killing power of opioids and the importance of putting clear and structured guidelines into practice. Millions of people watch Grey's every week. With luck, they were listening, too.

Sarah MacCarthy is an associate policy analyst at the nonprofit, nonpartisan RAND Corporation. Bradley D. Stein, director of the RAND Opioid Policy Tools and Information Center, is a senior physician scientist at RAND and an adjunct associate professor of psychiatry at the University of Pittsburgh.

This commentary originally appeared on Scientific American on April 5, 2019. Commentary gives RAND researchers a platform to convey insights based on their professional expertise and often on their peer-reviewed research and analysis.