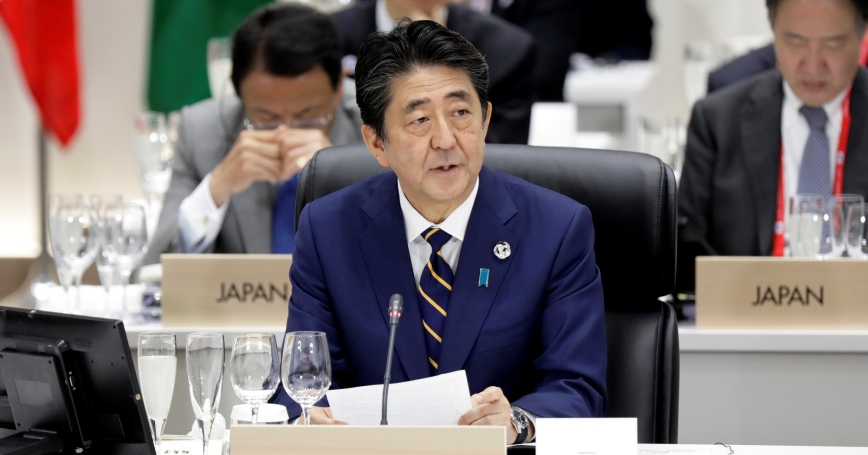 Japan's Prime Minister Shinzo Abe speaks during a working lunch at the Group of 20 summit in Osaka, Japan, on Friday, June 28, 2019

Against a backdrop of rising tensions between the United States and Iran, the United States began signaling its desire to create a coalition to ensure freedom of navigation in the Strait of Hormuz and the Bab al-Mandab. More recently, Secretary of State Mike Pompeo and Secretary of Defense Mark Esper have urged Japan to join such a coalition. These actions set off a heated debate in Tokyo about whether Japan should support such a coalition, and how. While Japan is one of America's staunchest allies in the Indo-Pacific, any decision to support coalition efforts is likely to put Prime Minister Shinzo Abe in a difficult position.

Since 2012, Abe has worked to strengthen Japan's ties with the United States and other democracies while elevating Japan's role in the international system. Abe has been a vocal advocate of Japan making “proactive contributions to peace” in the international arena. He has coupled this with his advocacy to maintain a free and open Indo-Pacific (PDF) region, called FOIP.

To add substance to this rhetoric, Abe strengthened strategic ties with countries like Australia, India, France and the United Kingdom and passed a package of security laws (PDF) in 2015 that legalized the limited exercise of collective self-defense. His government also revised a bilateral set of defense guidelines with the United States to update their roles and missions in security affairs and in 2013, he passed Japan's first National Security Strategy (PDF) that described the need to support “Stable and Open Seas,” including an explicit mention of the sea lines of communication stretching from the Persian Gulf to Japan. Taken together, the Abe administration has arguably increased an expectation that Japan is ready and able to play a more active security role, particularly those that affect freedom of navigation and the global commons.

The Abe administration has arguably increased an expectation that Japan is ready and able to play a more active security role.

Yet, a decision to support the United States is not automatic, as Abe may have reservations about damaging Japan's ties with Iran. In addition to energy trade and projects, after the Iranian Revolution, Japan was the only Western-bloc country that maintained friendly ties with Iran. During the Iran-Iraq War, Japan was even involved in shuttle diplomacy.

When Abe travelled to Iran this past June, the first since Prime Minister Takeo Fukuda's visit in 1978, he met with Iran's president Hassan Rouhani and Supreme Leader Ayatollah Ali Khamenei. Although the Japanese government never characterized Abe's role as attempting to mediate tensions with the United States, Abe has said he wants to do as much as possible towards peace and stability in the region. Although Japan has attempted to maintain a neutral stance between Iran and the United States in the past, Abe may wish to avoid overt support of an international coalition against Iran to avoid fundamentally breaking Japan's relations with Iran.

Even if Abe decided to support coalition efforts by dispatching its military, called the Self-Defense Forces, or SDF, he will have to expend a lot of political capital and keep Japan's participation limited to non-combat operations to placate voters, who are not enthusiastic about dispatching the SDF to the region. Under current conditions, Japan could order its navy, called the Maritime Self-Defense Force, to perform maritime security operations to escort Japanese and only Japanese commercial vessels safely through the area.

If conflict erupts, and Tokyo declares the situation as having an important influence on Japan, it would likely adhere to other strictly non-combat means to support coalition efforts, but not directly participating as a member. For example, the SDF could provide rear area support to the United States and other states with which Japan has an Acquisition and Cross Servicing Agreement. This could include things like refueling ships or even transporting supplies, including ammunition, to and from Japan to a coalition-base in the region. Similarly, the SDF can provide air and naval capabilities to help patrol the waters near coalition ships.

Abe will need to balance Japan's relations with its U.S. ally and Iran while considering the demands of his electorate. Should Abe act in accordance with his own words and government proclamations, it could be expected that Japan will proactively support a coalition of like-minded countries to protect the freedom of the global commons.

Doing anything less might appear to go against everything Abe has done and said since he became premier. Worse, it could risk Japan seeing a return of some of the harsh criticism (PDF) it experienced in the aftermath of the Gulf War when Japan's actions did not live up to international expectations. The tensions in the Middle East, and the expectations of Japan, may be Abe's first major security challenge of his administration. How Japan responds is ultimately up to Abe, but like other U.S. allies, his decision is not easy.

This commentary originally appeared on The Hill on August 15, 2019. Commentary gives RAND researchers a platform to convey insights based on their professional expertise and often on their peer-reviewed research and analysis.