Why Vanguard Bank and Why Now? Explaining Chinese Behavior in the South China Sea 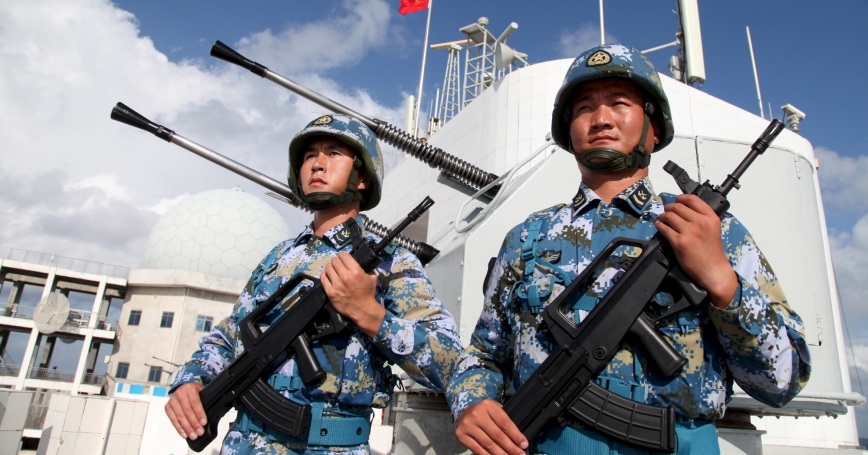 During the course of my recent discussions with Vietnamese interlocutors, one question has recurred: after a period of prolonged quiet in Vietnam-China relations in the South China Sea (SCS), why has Beijing all of a sudden decided to take a stand at Vanguard Bank? And one could easily further ask why at the same time Beijing opened a new front by conducting a major military exercise at the Paracel Islands? I think there are several components to answering these questions.

Why has Beijing all of a sudden decided to take a stand at Vanguard Bank?

First, although Vanguard Bank represents the worst Vietnam-China tensions in the SCS since the Haiyang Shiyou 981 oil rig standoff in May 2014, the intervening five years were hardly without incident or tension either. For the last two years in a row, China has put enormous pressure on Vietnam to prevent hydrocarbon drilling in the areas Vietnam considered its continental shelves under UNCLOS, but China regarded as disputed regions. In the 2018 instance, Beijing forced Hanoi to cancel a $200 million contract with the Spanish energy firm Repsol on exploring the seabed off the southern coast of Vietnam. Furthermore, presumed Chinese fishing militia ships have routinely rammed Vietnamese fishing vessels even as Hanoi has mostly tried to keep such activities out of the headlines to maintain calm in bilateral ties. Tensions came to a head earlier this year, however, and Vietnam finally decided to put a sunken Vietnamese vessel at the Haiyang Shiyou 981 stand-off on display together with the video of Chinese aggression.

Second, China has only continued to assertively enforce its excessive claims throughout the SCS and wider Indo-Pacific region. Starting late last year, for example, Chinese fishing militia employing hundreds of boats have been swarming and encircling Thitu/Pag-asa Island, disputed between China and the Philippines. Gray zone tactics such as these are designed to harass Filipino fishermen and create stress in Manila over whether the island is possible to defend. Elsewhere in the SCS, Beijing since 2013 has tirelessly patrolled the Luconia Shoals, disputed with Malaysia, and outside of the SCS, China has ramped up the number of intrusions into the Senkaku/Diaoyu dispute in the East China Sea (ECS) to challenge Japanese de facto control.

Third, Beijing now has significantly greater military and law enforcement capabilities on hand to challenge regional counter claimants, like Vietnam. China has the largest navy (PDF), coast guard, and fishing militia in the world and the People's Liberation Army (PLA) has been steadily honing joint operations in the air and naval domains for future combat in the SCS, ECS, or in a Taiwan scenario. Additionally, China's virtual completion of land reclamation activity and the establishment of naval and air bases on artificial features scattered across the SCS, whether in the Paracels or in the Spratlys, provides Beijing with new points from which to project power, thus making it easier to sustain constant patrols to disputed areas. Indeed as of early August, a Chinese survey ship involved in the Vanguard Bank dispute, Haiyang Dizhi 8, returned not to Chinese shores, but to one of Beijing's new naval bases on Fiery Cross Reef in the Spratly Islands. As of mid-August, Haiyang Dizhi had returned to Vietnam's exclusive economic zone (EEZ). Farther afield, if Beijing is in fact building naval and air base facilities in Cambodia, then Vietnam will face an additional threat on its Western flank.

Fourth, the erosion of U.S.-China relations in recent years, especially in the SCS context, has prompted Beijing to increasingly seek to defend its claims against U.S.-led freedom of navigation operations (FONOPs). In late June, for instance, the PLA for the first time tested an anti-ship ballistic missile, probably the DF-21D or “carrier killer,” and a longer range DF-26 variant, in the area near the Spratly Islands. Tailing of U.S. ships and warnings that they are illegally in Chinese internal waters during FONOPs have ratcheted up tensions in recent months. The last major incident occurred in early October 2018 and involved a PLA Navy Luyang-class destroyer that closed within 45 yards of the USS Decatur. A further deterioration of U.S.-China relations could result in even more assertive Chinese behavior to push back, not only against the United States itself, but also throughout the region.

From this perspective, Beijing may be probing the durability of deepening U.S.-Vietnam military-to-military relations. Vietnam has harbored serious questions about the sustainability of U.S. security commitments to allies, let alone what a “free and open” Indo-Pacific Strategy means for U.S. partners. China's seizure of Scarborough Shoal from the Philippines—a U.S. treaty ally in 2012—is the classic example cited that fuels Hanoi's speculation about whether Washington can be relied upon. And Vietnam received mere rhetorical support from the United States during the May 2014 oil rig crisis—and the same is true today at Vanguard Bank.

Finally, as I have written previously, the PLA likely seeks opportunities to test its growing capabilities to conduct joint operations, and unfortunately for Hanoi, Vanguard Bank may be just such an opportunity. However, this would first necessitate China bringing its warships into play and this is yet to happen. Either way, Vietnam has no military alliances and is a middle-sized power whose military, law enforcement, and fishing militia forces could be relatively easy to defeat considering their lack of experience in fighting at sea.

What can Vietnam do now to make Chinese assertiveness against it less likely going forward?

Perhaps the more salient question in all of this is what can Vietnam do now to make Chinese assertiveness against it less likely going forward? Although deepening the U.S.-Vietnam defense partnership in the short-term may be contributing to trouble with China, closer cooperation in the long-run could serve to deter China because it would become clearer to Beijing that U.S. support would have to be expected in any future conflict. But Washington as part of its Indo-Pacific Strategy (PDF) would have to demonstrate that it does not plan to allow a Scarborough Shoal 2.0, which could be a tall order. Enhancing cooperation with Vietnam's other defense partners—namely Australia, Japan, and India—could help to deter Beijing as well. But ultimately, Vietnam may have to become more accustomed to an increasingly assertive China and recognize the limits of influencing its behavior as Beijing's leverage inevitably continues to rise in SCS disputes.

This article was first published at Maritime Issues on August 16, 2019. It is republished with kind permission.