One Year After Tree of Life, We Still Aren't Talking Enough About Violent White Supremacy 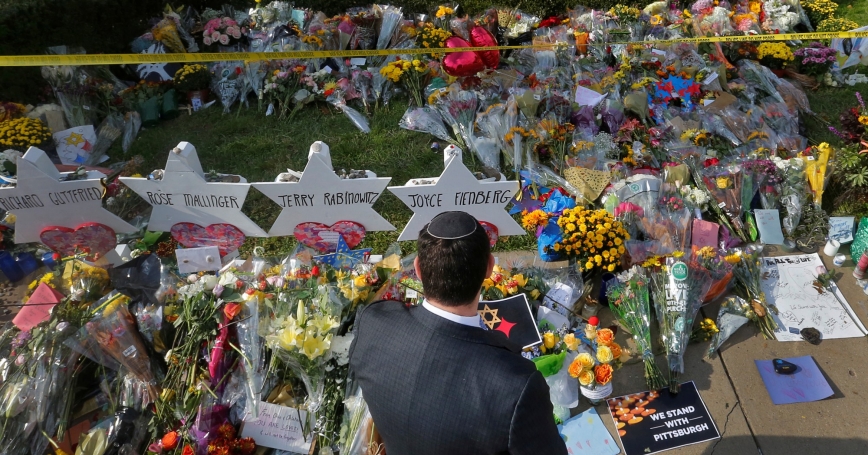 A man prays at a memorial outside the Tree of Life synagogue in Pittsburgh, Pennsylvania, following a mass shooting there four days earlier, October 31, 2018

It took an attack on a Jewish synagogue in my Pittsburgh neighborhood to wake me up to the dangers of violent white supremacy. And I'm a terrorism researcher who studies and analyzes the how and why of politically and ideologically motivated violence.

Yet because I focused on Salafi jihadists, groups in the Muslim world that believe in a return to “pure” Islam and the use of violence to make this happen, I failed to recognize the extremists in my midst—those who praise Hitler and speak openly on social media of hatred for Jewish people.

A year ago Oct. 27, I was home with my two young daughters when I began receiving a flurry of confusing text messages asking if we were safe. I turned on the television to see breaking news reports on a multiple-casualty shooting at the Tree of Life synagogue, barely a mile from my house in Squirrel Hill, the quiet community where I'd lived for a decade.

Sirens wailed outside, and out the window I saw an armored personnel carrier racing down my street. A shelter-in-place order was issued as rumors spread that the heavily armed gunman (or gunmen, they didn't yet know) was on the loose. These rumors later proved untrue—but in the moment, they were terrifying. I locked the doors to the house and took my kids into the basement. While I anxiously cradled my 3-month-old, I tried to persuade my 3-year-old that we were playing a game by hiding.

As I attempted to sort fact from fiction—something I'd done dozens of times as a terrorism researcher piecing together incidents as they unfolded around the world—it struck me that I'd been guilty of viewing terrorism as happening “out there,” in Yemen or Somalia. Now it had struck incredibly close to home: The gunman, motivated by virulent anti-Semitism, killed 11 worshippers and injured seven inside the synagogue.

As a college senior, I had been so affected by the Sept. 11, 2001, attacks that I decided to forego law or finance and dedicate my career to researching terrorism. Now I teach courses on terrorism to Carnegie Mellon University students, few of whom remember a world before 9/11. To them, 9/11 is history. I tell them how al Qaeda's attacks on New York and Washington changed the course of my life.

Since 9/11, more people have died in the U.S. because of white supremacist terrorism than jihadist terrorism.

Terrorist attacks on American soil today, however, are often committed by Americans targeting other Americans. The instances of domestic terrorism today are up significantly from a decade ago, as outlined by the University of Maryland's global terrorism database.

The warning signs were there. But many terrorism researchers, including me, remained fixated on analyzing terrorism that occurred overseas.

Even when I began to mentally process the attack in Pittsburgh, I—like many others—figured that the perpetrator had probably been radicalized by jihadist ideology, most likely inspired by Islamic State in Iraq and Syria. The group's propaganda had long urged individuals in the West to carry out attacks. Homegrown terror attacks linked to the Islamic State had occurred in San Bernardino in December 2015 and again in Orlando the following June.

The threat of white supremacy is now impossible to ignore. Since 9/11, more people have died in the United States because of white supremacist terrorism than jihadist terrorism. The tragic tipping point was the August attack that killed 22 mostly Latino victims in El Paso.

Just in 2018, white supremacy extremists were connected to 50 murders, including those at the Tree of Life synagogue. White supremacists killed more people last year than at any point since 1995, the year Timothy McVeigh bombed the federal building in Oklahoma City, killing 168 people.

In the year since the Tree of Life attack, the conversation surrounding white supremacy has grown louder. There have been hearings on the topic of white supremacy and domestic terrorism on Capitol Hill, for instance. The Department of Homeland Security also recently released a counterterrorism strategy that puts the threat posed by white supremacy extremists on par with those potentially emanating from jihadist terrorists.

The United States still has a long way to go in dealing with this threat, however. President Trump's rhetoric is often counterproductive. After an avowed white supremacist drove his car into a crowd of counter-protesters at a “Unite the Right” rally in 2017 in Charlottesville, Va., Trump said “there's good people on both sides.” The president's recent references to a potential “civil war” if he is removed from office could be misinterpreted by white supremacists as a call to participate in race war, which plays into long-held conspiratorial prophecies in the movement.

Bills have been proposed in the House and the Senate, but most focus solely on domestic terrorism. Many white supremacy extremists operating in the United States have connections overseas, including ties to neo-Nazis in Ukraine, so focusing only on domestic terrorism is unlikely to adequately address this threat. 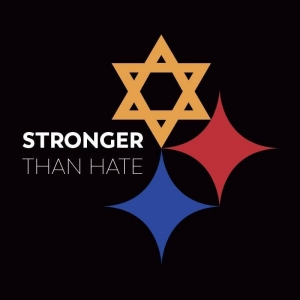 The United States could consider designating such transnational white supremacy extremist groups as foreign terrorist organizations—a move already taken by our allies, Canada and Britain. U.S. Departments of State and Treasury terrorist designations would deny members of these white supremacy groups entry into the United States; block assets of those individuals and groups; and allow the Department of Justice to prosecute anyone providing them with material support.

Pittsburgh is still reeling, but it has rallied around Squirrel Hill's Jewish community in the last year, and the feeling is one of resolve, not despair. The message the city sends is a poignant one, displayed prominently on T-shirts and signs that dot front lawns and hang in the windows all over town. They showcase a Star of David set into the Pittsburgh Steelers logo and three powerful words: Stronger Than Hate.

As for me, it shouldn't have taken an act of terrorism in my city for me to realize I needed to broaden my research to look more closely at the threat of extremist violence in my own country. But it did.

Colin P. Clarke is an assistant professor at Carnegie Mellon University's Institute for Politics and Strategy and an adjunct senior political scientist at the nonprofit, nonpartisan RAND Corporation.

This commentary originally appeared on Los Angeles Times on October 27, 2019. Commentary gives RAND researchers a platform to convey insights based on their professional expertise and often on their peer-reviewed research and analysis.