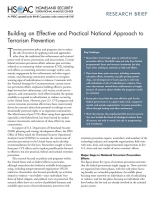 Building an Effective and Practical National Approach to Terrorism Prevention

Terrorism prevention policy and programs aim to reduce the risk of terrorism by applying tools and approaches other than the traditional law enforcement and criminal justice tools of arrest, prosecution, and incarceration. Current federal terrorism prevention efforts subsume past activities, referred to as countering violent extremism (CVE), including such efforts as countering extremist messages online, community engagement by law enforcement and other organizations, and educating community members to recognize warning signs of radicalization to violence. Consistent with the National Strategy for Counterterrorism, current terrorism prevention efforts emphasize building effective partnerships between law enforcement, civil society, social service agencies, and communities. Such efforts broaden the options available to respond to radicalization to violence occurring in the United States. However, past U.S. CVE programs and current terrorism prevention efforts have been controversial, driven by concerns about their potential to infringe on constitutionally protected rights or to stigmatize communities. The effectiveness of past CVE efforts using these approaches, especially at the federal level, has been limited by modest resource investments and mistrust of these efforts by some communities.

In support of U.S. Department of Homeland Security (DHS) planning and strategy development efforts, the DHS Office of Policy asked the Homeland Security Operational Analysis Center (HSOAC) to examine the current state of terrorism prevention in the United States and to develop recommendations for this area. Researchers sought to learn from past CVE efforts and to explore possible paths forward to effective, but also practical, federal and national terrorism prevention.

This research focused on policies and programs within the United States and on federal efforts in particular, although researchers also looked at available local programming, including nongovernmental organization (NGO) initiatives. Researchers also focused specifically on activities related to violence — not beliefs — since individuals' freedoms of belief, religion, and political view are protected. The research effort drew on a review of published literature and available open-source threat information; interviews with terrorism prevention experts, researchers, and members of the technology industry and nonprofit organizations; field visits with state, local, and nongovernmental organizations in five U.S. cities; and case studies of seven countries' efforts.

The analysis found major gaps in national terrorism prevention efforts across all five types of activities. Shortfalls came not only from limited programmatic focus and resource investment, but also as a result of sustained opposition that tried to constrain or halt such efforts.

However, there have been some successes in community education and public-private partnerships, such as the Peer2Peer (P2P) program, which funded university students to create media campaigns to counter extremist narratives. This program was repeatedly cited by interviewees as a success story in government cooperation with NGOs. Many interviewees viewed the recent defunding of P2P's domestically focused component as a significant missed opportunity.

Some capacity to intervene with individuals at risk of radicalizing to violence has been built at the local level, often through existing intervention programs that address other violence and related concerns. For example, the Los Angeles Police Department recently launched the Providing Alternatives to Hinder Extremism program, which aims to respond to individuals at risk of perpetrating violence and, working with the mental evaluation unit, to intervene and provide counseling and other services. This program is nested within the broader approach taken in Los Angeles to address targeted violence. Across the nation, there are other efforts that seek to address intervention for ideologically motivated violence in the context of broader existing programs. One NGO-sponsored effort is Life After Hate, which provides crisis intervention initiatives to help people move away from racism and violent extremism.

Although federal and others' efforts to date have built some capability, these successes are viewed as fragile because of the controversy surrounding past CVE and current terrorism prevention activities and the limited funding available to support programs. Both could make it impossible to sustain the modest capability built to date.

The Federal Government Can Best Serve as a Supporter of State, Local, NGO, and Private Efforts

Given these challenges, researchers found that the most effective path for the federal government is to support state, local, NGO, and private organizations' terrorism prevention efforts through funding and other mechanisms. There was strong consensus across all interviews that such efforts have to be locally designed, managed, and driven, and implemented in a way that is acceptable to the communities they are intended to protect.

At the same time, having someone aware of the federal picture who is locally based could help to build relationships, strengthen trust, and act as an on-the-ground facilitator of local terrorism prevention efforts. Interviewees reported that this could deliver immediate results and help build for the longer term. Most interviewees emphasized that terrorism prevention must include the threat of ideological violence from all sources — from the Islamic State in Iraq and Syria (ISIS) to white supremacists to environmentally inspired violence — and must do so not only in words, but also in programming and investments.

The research team identified a robust menu of possible actions to support effective and practical federal policies and intervention options in the area of terrorism prevention.

Awareness and training: A key role for the federal government is to provide credible information, including sharing best practices and providing tools to organizations seeking to implement terrorism prevention efforts. Other types of useful central programming could include community awareness briefings and resilience exercises, which help communities identify at-risk individuals and provide referrals for intervention.

Federal support of local initiatives: Given the difficulties associated with direct federal action in many elements of terrorism prevention, federal government support of local initiatives via grant funding, public-private partnerships, or by working directly with communities appears to be necessary to advance efforts and build capacity. The federal government can play a useful role as a "convener," getting people around a table to figure out what their community needs and what kind of program could meet those needs. A substantial investment in intervention capacity separate from law enforcement also would be valuable to respond to concerns in some communities and sectors regarding terrorism prevention.

Federal program development: Increased programmatic support would make it possible to reconstitute federal field staff focused on facilitating terrorism prevention efforts locally and to expand their coverage nationally. Any expansion of recidivism-reduction efforts will also require federal action: The central role of the federal prison system in managing terrorism-related offenders means that it must develop capabilities at the federal level. Another issue where the federal government is best positioned to respond is the development of human capital — i.e., people who are engaged in and knowledgeable about terrorism prevention — both inside government and outside in the research and service provider sectors.

Situational awareness and research and evaluation: The federal government also can play a key role in data-gathering and analysis by, for example, providing situational awareness about such important topics as trends in public concern and the capacity of national intervention systems. Terrorism prevention programs would benefit from research to support better measurement and evaluation; better integration of evaluation into programs as they are implemented; the sustainability of terrorism prevention efforts; and the enduring challenge of individual risk assessment for ideologically motivated violence.

The timing of this research effort, with the changeover in administrations, presents an opportunity to explore possible future paths for national terrorism prevention efforts. The goal of the approach described here is to develop effective policies and intervention options — but also practical ones — that respond appropriately to terrorism risk and do so in a way that minimizes the many costs to the individuals affected and to the society that terrorism prevention efforts aim to protect.