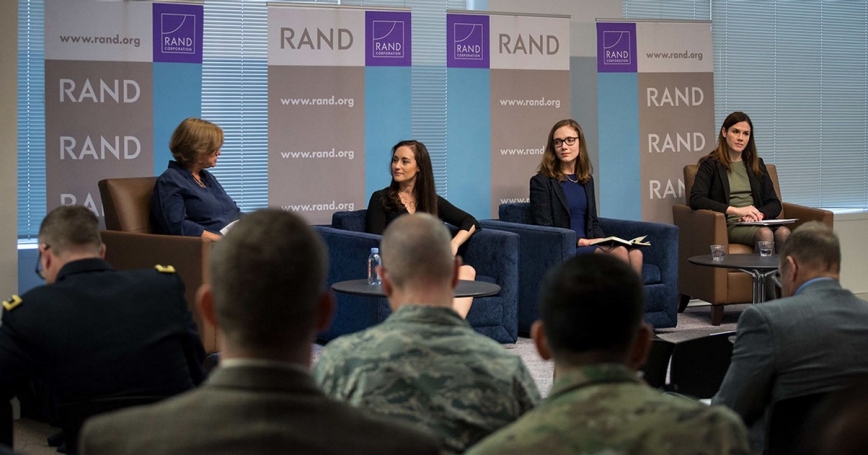 Panelists at the Roberta Wohlstetter Forum on National Security in Arlington, Virginia, October 24, 2018

by Caroline Baxter and Elizabeth Bodine-Baron

In 2015, a Tumblr blog called “Congrats, you have an all-male panel!” went viral. Created by Finnish international relations scholar Saara Särmä, it sparked the term “manel” with its hundreds of photos of such panels from around the world. Four years later, a study on Washington think tanks showed that the national security community still had a lot of room for progress: More than a quarter of foreign policy panels in 2018 didn't have a single woman.

This state of affairs is so persistent that it could be easy to presume that there aren't enough women with deep expertise and that—even worse—what they have to say might be of lesser interest.

More than a quarter of foreign policy panels in 2018 didn't have a single woman.

We put both of these assumptions to the test last October when we organized the first Roberta Wohlstetter Forum on National Security. Our panelists came from varied backgrounds, ethnicities, and disciplines, but shared one characteristic: They were all women.

On national security panels women have had just token representation for so long that we were sure everyone would notice our change-up. We even worried that some of those invited would decline to come. We were wrong: It seemed to make no difference. We believe that's because we marketed the event as a chance to hear from the experts—not the women experts. Only if one noted the name of each and every panelist and moderator would it have been clear that attendees would hear from only women. When Caroline took the stage to give her opening remarks, she saw an audience that resembled every other national security conference around Washington D.C.: about 70 percent men, many in uniform.

Our takeaway was that an all-women event can be just as popular as any manel. Further, keeping the focus exclusively on the speakers' expertise—not their sex—helps guarantee that result.

An all-women event can be just as popular as any all-male panel. And keeping the focus on the speakers' expertise—not their sex—helps guarantee that.

When conferences in traditionally male fields such as national security highlight the sex of their female speakers, that shifts the focus away from the speakers' expertise and toward the righting of a historic wrong. Such marketing preaches no further than the choir and, worse, can add a needless, distracting layer of moralism.

The Roberta Wohlstetter Forum on National Security not only attracted our intended audience, its subtext came through as well. The next day, a colleague who attended the forum wrote, “As one person (male) said to me—our event made it painfully obvious that anybody who claims that they just ‘couldn't find a woman' to speak on a topic, even one highly technical or defense-oriented, is just lazy or knowingly excluding women.”

There are good reasons to organize events specifically for women, such as those run by Women in International Security and NatSec Girl Squad. They foster community, provide an environment to network and find mentors, and can boost the confidence of women just entering what remains a male-dominated field. But when mainstream events dwell on, or even mention, the sex of their speakers, that prevents the national security community from valuing women's voices as implicitly as it does men's. No “manel” has ever been billed as all-male; the very idea sounds bizarre. Why should women be designated a subcategory of experts?

Asked when there would be enough female justices on the Supreme Court, Justice Ruth Bader Ginsburg famously replied, “When there are nine.” As she pointed out, “There had been nine men, and nobody's ever raised a question about that.”

In other words: The goal isn't to stack the court with women because they're women. The goal is to change the culture so that an all-female Supreme Court wouldn't raise an eyebrow.

Women must be given that most significant form of respect: Just call us experts.

Women are tired of being included because they're women first and experts second. In national security, our goal must be to move our field into a new era where a woman's expertise is valued as implicitly as a man's, and the decision to invite a woman to speak on a panel requires as little forethought. To get there, women must be freed of the baggage of being women scholars and women policymakers. Instead, women must be given that most significant form of respect: Just call us experts.

Caroline Baxter is a senior policy analyst at the nonprofit, nonpartisan RAND Corporation, where she focuses on issues related to operational strategy, base resiliency, expeditionary warfare, and military readiness. Elizabeth Bodine-Baron co-directs the RAND Center for Applied Network Analysis and System Science and is the associate director of the Force Modernization and Employment Program in Project Air Force.