How to Read Vietnam’s Latest Defense White Paper: A Message to Great Powers 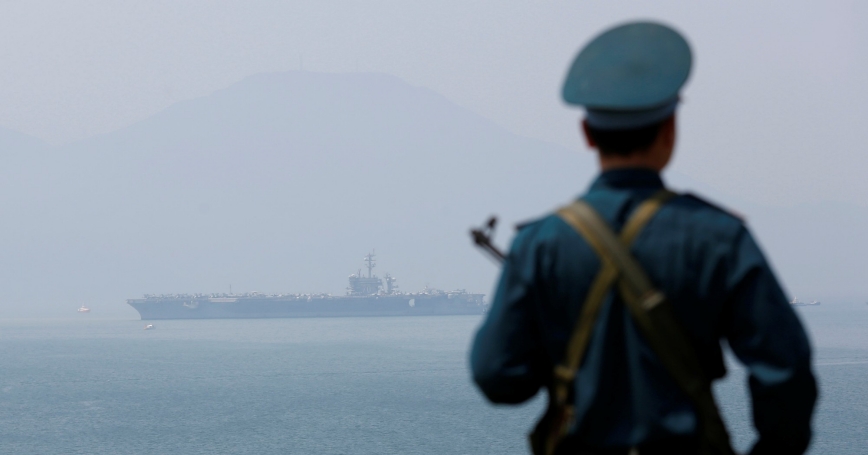 A Vietnamese soldier keeps watch in front of U.S. aircraft carrier USS Carl Vinson after its arrival at a port in Danang, Vietnam, March 5, 2018

by Derek Grossman and Christopher Sharman

Ten years is a long time to wait for anything, but the release (PDF) of Vietnam's latest defense white paper on Nov. 25—the first since 2009 (PDF) and fourth since Hanoi began issuing white papers in 1998—was certainly worthwhile. Vietnam's defense white papers have traditionally served as generic, non-offensive policy statements on external threats to Vietnamese security and an explanation of how the Ministry of National Defense is addressing them. Wrapped in Marxist-Leninist ideological narrative and steeped in subtlety, ambiguity, and coded language, it is typically difficult to determine a clear message from these documents. However, the latest defense white paper represents Hanoi's clearest warning yet to China—Vietnam's near-exclusive security threat and one it perpetually attempts to both engage and balance against on multiple fronts—that Vietnam might have to strengthen defense ties with the United States if Beijing's bad behavior persists in the South China Sea. That is a message with significant implications for Washington's Indo-Pacific Strategy (PDF) to keep the region “free and open” from coercion.

A Warning to China

Vietnam's bilateral ties with China are often complex and contradictory. On the one hand, Vietnam treats China with great respect and attempts to work with it on a range of security and economic issues. Indeed, Hanoi in 2008 raised China ties to the level of a “comprehensive strategic cooperative partnership”—the highest designation it accords to any major power. On the other hand, Hanoi is increasingly frustrated by growing Chinese assertiveness in the disputed South China Sea. Tensions were particularly high this summer during a months-long standoff near Vanguard Bank—which is the westernmost reef in the Spratly Islands—that wound up extending up and down Vietnam's coastline. Hanoi is also deeply suspicious of Beijing's intentions to leverage the Belt and Road Initiative for “win-win” outcomes, both within Vietnam and in relations with close Vietnamese partners Cambodia and Laos, possibly designed to encircle Vietnam.…

Derek Grossman is a senior defense analyst at the nonprofit, nonpartisan RAND Corporation. He formerly served as the daily intelligence briefer to the assistant secretary of defense for Asian and Pacific security affairs at the Pentagon. Capt. Christopher Sharman, U.S. Navy, is a national security affairs fellow at the Stanford University Hoover Institution. He previously served as a Navy attaché in both Vietnam and in China. The views expressed herein are those of the authors and do not reflect the official policy or position of the U.S. Navy, U.S. Department of Defense, or the U.S. Government.

This commentary originally appeared on War on the Rocks on December 31, 2019. Commentary gives RAND researchers a platform to convey insights based on their professional expertise and often on their peer-reviewed research and analysis.