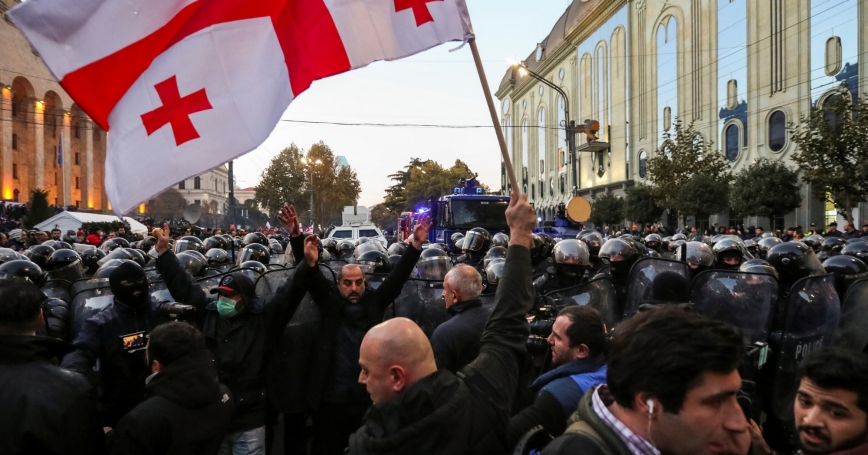 Georgia's status as a post-Soviet democratic leader is under challenge. A flawed presidential election, use of force against protesters, and political manipulations by the secretive billionaire who heads the ruling Georgian Dream Party have strained public confidence and brought mounting public protests. Domestic calm may hinge on improving political dialogue and conducting free and fair parliamentary elections in fall, 2020.

Independent Georgia has made substantial democratic progress, aided by multiparty elections, robust civil society organizations, and media freedoms. In 2003 the Rose Revolution—a peaceful uprising against political stagnation—accelerated democratic momentum. Now Georgians may again be tiring of poor governance and lack of transparency. A National Democratic Institute poll last July found that 60 percent of respondents evaluate the performance of the current government as “bad.”

Some hoped the flawed election was an aberrant democratic setback, but perhaps not.

Denis Corboy was the director of the Caucasus Policy Institute, King's College London, and EU ambassador to Georgia and Armenia. William Courtney is an adjunct senior fellow at the nonprofit, nonpartisan RAND Corporation, and was U.S. ambassador to Kazakhstan, Georgia and a U.S.-Soviet commission to implement the Threshold Test Ban Treaty. Kenneth Yalowitz is an adjunct professor at Georgetown University and Global Fellow at the Wilson Center, and was U.S. ambassador to Belarus and Georgia.

This commentary originally appeared on The National Interest on December 8, 2019. Commentary gives RAND researchers a platform to convey insights based on their professional expertise and often on their peer-reviewed research and analysis.