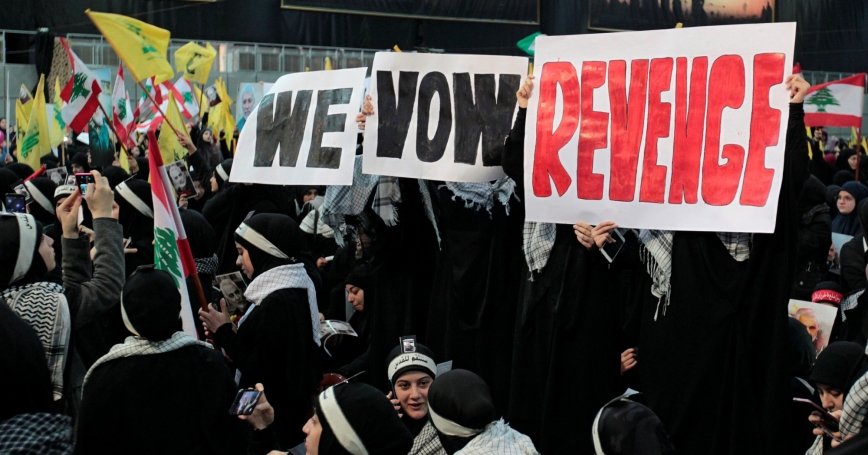 The American drone attack that killed Iranian Gen. Qassem Soleimani last week is the latest move in a low-level war between Iran and the United States that has been waged with varying degrees of intensity for over 40 years—and is likely to continue long into the future.

Some people fear that recent events will escalate the long conflict into a costly all-out war between the two countries. Others may welcome what they see as the necessary and inevitable showdown leading ultimately to regime change in Tehran.

The killing of Soleimani—the most prominent military figure in Iran and close to Supreme Leader Ayatollah Ali Khamenei—can be seen as an escalation and will almost certainly provoke Iranian retaliation. President Trump's boast of ordering the killing of Soleimani may further increase pressure on Iran to respond.

But although Iranian retaliation for Soleimani's killing and counter-retaliation by the United States seem likely—and politically advantageous to both governments—Tehran and Washington have good reasons to inflict limited pain without engaging in a full-scale war.

Iran has little interest in beginning an all-out war in which Iran itself would suffer major damage. While Iran's leaders describe Soleimani as a martyr, the regime does not seek martyrdom.

The United States must expect some immediate spontaneous terrorist attacks, but Iran's leadership takes a longer view. Its paramount objective is survival.

While Iran's leaders describe Soleimani as a martyr, the regime does not seek martyrdom.

And while the Trump administration may want to deter the Iranians from creating politically dangerous situations for the U.S. government and distract attention from the president's own domestic political problems, Trump has made clear his opposition to becoming involved in another costly Middle East war. Indeed, he claims that killing Soleimani was necessary to prevent a war.

The past may be prologue to the future. Iran is a master of hybrid warfare. It has used proxies and its own covert operatives to carry out kidnappings and terrorist bombings, sabotage ships at sea and oil facilities on land, blow up embassies, and assassinate government officials. Its reach is global.

Iran can operate on the cyber battlefield as well to torment the United States without offering a clear-cut justification for war. And Iran is well aware of President Trump's domestic political problems and America's election cycle.

Iran has already forced the United States to evacuate diplomats from Iraq, warn U.S. citizens to get out of Iraq, and deploy thousands of additional troops to the Middle East. It can try to create additional crises that draw the United States into further military commitments.

The Iranian regime can also create problems for America's few remaining allies in the region—Israel, Saudi Arabia, and other Gulf monarchies. It can persuade America's increasingly worried allies elsewhere to distance themselves from Washington. America's adversaries will benefit.

At the other end of the spectrum, Iran may further accelerate its nuclear weapons program. And if it has not already done so, American military threats could persuade Iran to initiate a parallel clandestine effort to quickly fabricate and secretly deploy a crude nuclear device as a deterrent or instrument of revenge if the regime is overthrown.

Without risking an all-out war, Iran's leadership can distract attention from its own domestic problems, provoke widespread fear and alarm among Americans as well as U.S. allies, and weaken the United States.

One can understand the apprehension in Washington when Iraqi militias and mobs under Iranian control stormed the U.S. Embassy in Baghdad last Tuesday. Any assault on a U.S. diplomatic facility can turn into another Benghazi, where in 2012 Libyan terrorists murdered the ambassador and three other Americans.

From a domestic political perspective, the worst thing to happen would be the takeover of an American embassy in Baghdad or elsewhere that resulted in a protracted hostage crisis—a repeat of the 1979 takeover of the U.S. Embassy in the Iranian capital of Tehran.

Many blame President Carter's landslide defeat in the 1980 presidential election on his administration's inability to rescue or negotiate the release of the 52 American hostages held by Iranians for 444 days.

We do not know what Gen. Soleimani was planning when he was killed while meeting with the head of the militia forces behind the assault on the U.S. Embassy in Baghdad. The militia leader was also killed by the American drone.

But everyone in government knows the history. Taking over embassies crosses a red line for any administration.

The hostage crisis in Tehran was just the first of many anti-American actions by the revolutionary government.

Over 30 years ago, Iran's Islamic Revolutionary Guard Corps exploited discontent among Lebanon's Shiites to field proxies who were responsible for the 1983 bombing of the Marine Barracks in Lebanon, in which 241 U.S. service members died.

Iranian-supported Shiite militants also carried out a series of assassinations and kidnappings of Americans and others in Lebanon, creating political crises in Western capitals throughout the 1980s.

President Ronald Reagan's administration was politically wounded by the scandal that resulted from the revelation that it had secretly sold arms to Iran in exchange for Iran's assistance in bringing about the release of American hostages. But as some American hostages were released, more Americans were kidnapped.

Iran continues to engage in “detainee diplomacy”—holding American citizens and dual nationals as currency for future negotiations. The regime might step up its kidnappings in the wake of the killing of Soleimani.

From Tehran's perspective, its actions against Washington were in response to continued American hostility, as well the continued U.S. presence in the Middle East.

Decades ago Iran's leadership saw its arch foe Iraq as an American puppet and believed that the United States encouraged Iraqi President Saddam Hussein to invade Iran in 1980. Initially neutral in the contest, the United States later tilted toward Iraq, removing it from its list of state sponsors of terrorism and thereby facilitating the shipment of arms and other forms of assistance to Baghdad.

The list of Iranian actions in its low-level war with the United States is long. And unfortunately, the list is likely to get longer.

Iran responded to this by secretly mining the gulf, and some of the reflagged vessels were damaged. The United States retaliated by attacking Iranian vessels and oil platforms that were being used by Iran's Revolutionary Guards to coordinate the Iranian campaign.

The secret war continued into the 1990s. FBI investigators concluded that Iran had instigated the bombing of Khobar Barracks in Saudi Arabia in which 19 American airmen were killed; nearly 500 others in the Air Force were injured by a gigantic truck bomb.

Iran also supported anti-American Shiite militias during the U.S. occupation of Iraq, which were responsible for more than 600 American deaths.

Hezbollah had Iranian support when it launched a new wave of terrorist attacks on Israeli and Jewish targets worldwide. The attacks began after Imad Mugniyah—a senior Hezbollah operative called a legend by Soleimani and the man responsible for the kidnappings of westerners in Lebanon and terrorist attacks on American and Israeli targets—was killed by a bomb. The Hezbollah campaign included bombings and assassinations.

In 2011, Iranian operatives were also reportedly involved in a plot to assassinate the Saudi Arabian ambassador to Washington with a bomb that would certainly have also killed Americans.

That's a long list of Iranian actions in its low-level war with the United States, and unfortunately, the list is likely to get longer.

But it would be surprising if Iranian leaders—despite all their threats following the killing of Soleimani—decided to go further and risk a full-fledged war with the United States that would devastate their country and might end with the overthrow of their regime. The danger comes more from miscalculation than madness.