If U.S. Forces Have to Leave the Philippines, Then What? 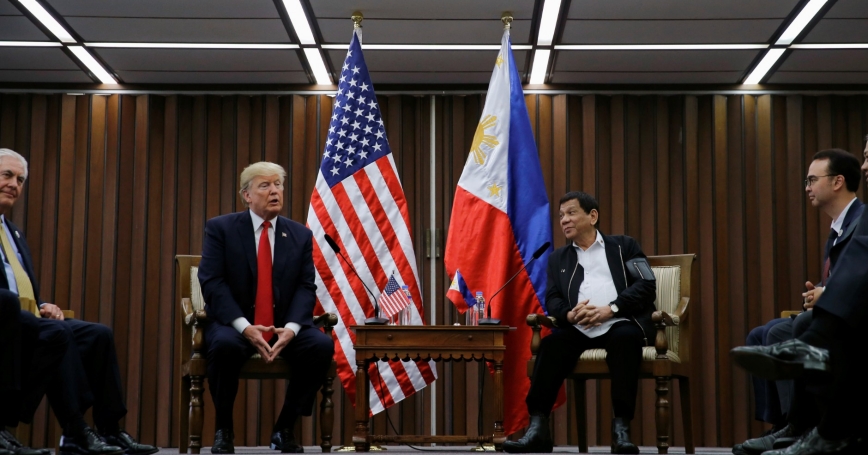 The Philippines began the process of terminating its Visiting Forces Agreement (VFA) with the United States in mid-February. In place since 1998, the VFA grants legal status to U.S. forces who are in the Philippines temporarily for exercises, humanitarian assistance and disaster relief, and other contingencies. This legal status, similar to the Status of Forces Agreements (SOFA) with Japan and South Korea, enables a predictable, dependable, and cooperative relationship between the Philippines and the United States, and also allows for the rapid execution of our responsibilities under the Mutual Defense Treaty (MDT).

Without the legal protection granted by the VFA, U.S. forces sent to exercise with their Filipino counterparts or respond after a humanitarian emergency would face complicated and time-consuming processes to secure visas for personnel and access to bases and ports for equipment. Indeed, it was the VFA that enabled U.S. forces to respond faster than other nations after super typhoon Yolanda in 2013.

The United States and the Philippines have 180 days to negotiate a new VFA. If, on day 181, there is no new VFA in place, its absence would neither automatically invalidate the MDT nor force the United States to pull out all service personnel and equipment in-country on rotation. However, it would place those personnel in legal limbo (and under Filipino jurisdiction in the event of a criminal incident) and make it that much harder for the United States to respond quickly in a crisis, both of which directly threaten the viability of the MDT. In this way, the VFA is a crucial piece of the U.S. ability to deter adversaries and reassure friends. The United States has a lot at stake in maintaining access to the Philippines.

At times when this access is in doubt, it is worth reviewing the impact of its loss. If, hypothetically, the loss of the VFA begins a chain reaction that, encouraged by Chinese pressure, ends with the dissolution of the MDT, the expulsion of U.S. forces, and denial of future access, what would that mean for U.S. operations? In essence, the loss of Filipino bases pushes the operational and logistical burden to four other main operating locations—South Korea, Japan (the mainland and Okinawa), Australia, and Guam. As a result, the size, speed, and character of forces deployed for conflicts related to the South China Sea and Taiwan would change, for two main reasons—one political, and one logistical.

A Mutual Defense Treaty is not a guarantor of operational access for any conflict that arises. Depending on the specifics of the conflict, the United States could face pressure from Seoul, Tokyo, or Canberra to not use their territory to launch military operations for a fight that they would not themselves get involved in.

It is by no means guaranteed that Australia, Japan, or South Korea would allow U.S. bases on their territory to prevent a Chinese invasion of Taiwan.

This may cause particular complications for conflicts related to Taiwan. No major Indo-Pacific country recognizes Taiwan; some, like Australia, adhere to their own “one China” policy, which generally means that they “do not recognize Taiwan as a country,” but “maintain unofficial contacts with Taiwan promoting economic, trade and cultural interests.” All countries have strong economic ties to China, and therefore have a lot to lose. It is by no means guaranteed that Australia, Japan, or South Korea would allow U.S. bases on their territory to prevent a Chinese invasion of Taiwan.

Operating rights could be more fluid, and therefore unpredictable, regarding the South China Sea. For South Korea, the occupant of the Blue House at the time of the conflict would matter. Previous liberal administrations, like that of progressive Roh Moo-hyun, have been comparatively cool on the U.S.–South Korea alliance, opting to keep it so long as the United States does not demand political or military support. By contrast, Moon Jae-in has been more willing to lean into the alliance in order to enable greater capacity for South China Sea operations. Regardless of the party in power, a constant consideration would be South Korea's relationship with, and willingness to antagonize, China. South Koreans still remember China's anger over the decision to allow the United States to deploy the Terminal High Altitude Area Defense (THAAD) missile system.

For Japan, the reasons behind the conflict—and how the United States would plan to use its basing access—would be driving factors. Japan puts great stake in the language of “prior consultation” embedded in the “Exchange of Notes” between then-Prime Minister Nobusuke Kishi and then-Secretary of State Christian Herter who negotiated the Mutual Defense Treaty in 1960. According to the language (PDF), “Major changes in the deployment into Japan of U.S. Armed Forces, major changes in their equipment, and the use of facilities and areas in Japan as bases for military combat operations to be undertaken from Japan other than those conducted under article V of said treaty, shall be subjects of prior consultation with the Government of Japan.” If the conflict were to be seen as a referendum on China's claims on disputed territory, then Japan might allow U.S. forces to operate as a means to secure its own claims on the Senkakus. However, a less hawkish prime minister might deny, or at least downgrade, U.S. operational capabilities.

Both Japan and South Korea have a coordination mechanism baked into their treaties with the United States that says, in essence, the governments must agree to the “specific facilities and areas” to be used by the U.S. military during a conflict. Depending on the situation, both countries have the ability to restrict U.S. operational access to a subset of locations.

For Australia's part, although it does care about the South China Sea, it also is well aware that its alliance with the United States presents an “abandonment vs. entrapment” dilemma: eschew supporting an ally in a fight and risk losing them, or support an ally and risk being stuck fighting an unwanted war. For this and other reasons, Australia has sought peaceful resolutions when tensions have erupted in the South China Sea.

Therefore, losing access to the Philippines increases U.S. vulnerability to the domestic politics and foreign policies of its other treaty allies. Even if those allies do grant the United States some kind of operational access, there may still be serious operational impacts if a conflict erupts.

Without the Philippines, U.S. forces would be faced with a series of math and physics problems from fighting from much farther away.

Because their path would largely take them over open ocean, forces flowing from Japan or South Korea would not travel through foreign airspace, allowing for a much straighter and faster course. However, they would be coming from—and moving through—within the range of a sizable Chinese missile quiver. To reduce that vulnerability, operational planners might be forced to move the bulk of these units to Guam and Australia.

Such great distances produce a heavier logistical burden, especially for the Air Force. Fighter jets would need to be refueled en route more often, giving hostile forces two prime targets rather than one. The Philippines and Indonesia also might deny U.S. forces access to their airspace, making the route even more circuitous.

More time spent aloft also means planners would run into crew rest restrictions. Assuming a flying speed of Mach 1.6, an F-35 pilot flying a sortie from Darwin to the South China Sea would spend a minimum of four hours in transit round trip, plus the duration of the sortie. Afterward, that pilot would be out of the fight for at least 10 hours (PDF) on mandatory rest. Depending on the number of pilots available to fly and the operational tempo, ten hours can be a long time.

Beyond using Philippine bases as a forward operating location, these bases allow U.S. forces to preposition resupply materials close to the fight. Okinawa houses critical resupply materials, such as fuel and munitions for the Army and Air Force, but 1,000 miles is a long way when you're in need.

If Taiwan is the area of operations, some U.S. military facilities are much closer—but come with serious complications. Okinawa and mainland Japan are just 450 miles away; South Korea and Guam are 1,300 miles and 1,700 miles away, respectively. (Darwin, at 2,300 miles away is a less-viable operational hub.) Assuming the bulk of forces come from and through Japan and South Korea by virtue of proximity, a logistical bottleneck for all reception, staging, onward movement, and integration (RSOI) could arise.

The finite number of airfields, ports, and roads, and the rules and regulations surrounding their use, presents a logistical challenge. For example, to move large, heavy vehicles on mainland Japan's roads, the U.S. military needs to request permission 45 days in advance and include proposed routes, the size and weight of each vehicle, and the specific map to be used. Permission is then granted not by the Ministry of Defense, but by the Ministry of Land, Infrastructure, Transport, and Tourism. In Okinawa, the Okinawan General Bureau adjudicates such requests at least 10 days in advance. Similar restrictions exist in South Korea.

While these restrictions could change during wartime, they would slow down U.S. force preparations before combat operations begin.

Time and Distance Are an Enemy

If the United States were to lose access to bases in the Philippines, the effects will ripple outward. With fewer options available, even simply for staging and prepositioning, heavier loads will wind up elsewhere. And yet that may be unacceptable for diplomatic or logistical reasons.

If the United States were to lose access to bases in the Philippines, the effects would ripple outward.

In the worst-case scenario, in which U.S. forces have to flow from the United States to a conflict in the Indo-Pacific region, time and distance would be as great an enemy as the adversary itself. Assuming a speed of 22 knots, a ship like the LHA 6, home-ported in San Diego, would take nine days to get to Tokyo, 12 days to get to Taiwan, and 13 days to get to the South China Sea. This is a slow response time to what might be a very rapid conflict. Indeed, it is dangerous to assume that the United States will have an unambiguous and timely warning of any conflict in the region.

In sum, then: Does the loss of the VFA fundamentally degrade U.S. operations in the region? No. But could it be the first step towards that end result? Yes. This is why ensuring a U.S. soldier can train her counterpart in Manila without a visa also ensures she can also come to the defense of a U.S. treaty ally. Maintaining these alliances in the Indo-Pacific in all their manifestations is critical—and the details matter.

Caroline Baxter is a senior policy analyst at the RAND Corporation, where she focuses on issues related to operational strategy, base resiliency, expeditionary warfare, and military readiness.

This commentary originally appeared on Foreign Policy Research Institute on February 27, 2020. Commentary gives RAND researchers a platform to convey insights based on their professional expertise and often on their peer-reviewed research and analysis.