Panel: How the Media Can Help Fight Truth Decay 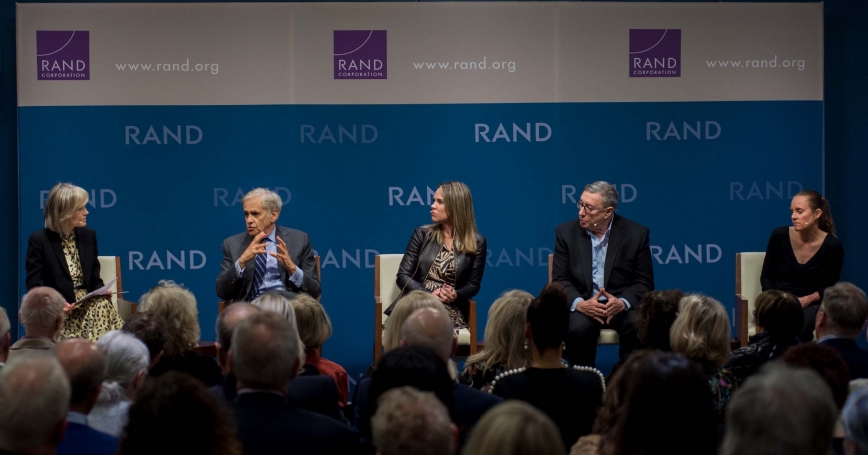 Panelists discussed the media's role in "Truth Decay," the diminishing role of facts and analysis in American public life, at the RAND Corporation in Santa Monica, California, February 25, 2020

Americans are losing faith in once-trusted sources of information—including the news. The rise of that trend is one reason experts are sounding the alarm about Truth Decay, or the diminishing role of facts and analysis in American public life.

The media's role in this phenomenon was a key concern for both RAND leaders and media experts who spoke at a “Truth Decay and the Media” panel on February 20 at RAND's Santa Monica headquarters. Panelists included Rich; Jennifer Kavanagh, leader of RAND's Countering Truth Decay initiative; Wendy McMahon, president of ABC Owned Television Stations; and Norman Pearlstine, executive editor of the Los Angeles Times. Willow Bay, dean of USC Annenberg School for Communication and Journalism, moderated.

Both McMahon and Pearlstine addressed the changing media landscape, including the sudden, seismic shift to a digital environment. The rise of smartphones and the need to survive in this new ecosystem created a panic in the industry that led to quests to drive traffic and Facebook referrals, among others. And added pressures on the business side of media decimated newsrooms. For example, in the ‘90s, the Orange County edition of the L.A. Times had 200 reporters on staff, Pearlstine said. In 2018, there was just one reporter left.

“The deterioration of the business model, particularly for print, has impacted on our ability to do the kind of journalism that is most appreciated by our audience,” Pearlstine said.

At the same time, traditional media responded to the internet's constant flow of information by focusing more on interpretation and columns, confusing voice, opinion, and fact.

“We really need to do a lot to dial that back,” Pearlstine said.

“People feel confused. They really struggle with this blurring of the line between fact and opinion,” Kavanagh said. Anything that can be done to disentangle opinion and fact and keep them separate can help.

“They may know that there are other more reliable sources out there, but they just don't have time,” Kavanagh said. “Not everyone wants the long form.”

A task for news organizations is to figure out how to get high-quality news into small chunks that people can consume, she said. That environment is currently dominated by low-quality news.

“I think there is value to having a more-diverse news environment…to allowing people choice,” Kavanagh said. Her research found that people who rated the news as more reliable than in the past were more likely to be women or minorities. This could mean that groups that had been excluded from the media environment now see themselves reflected in the news.

“When we think about solutions, this is always a sticking point for me,” Kavanagh said. “How do we get rid of the things we aren't happy with, while keeping the things that are so good?”

According to the panelists, news organizations are considering that question and making strides.

ABC's stations are working to build and maintain trust through relevance. McMahon cited the company's community journalism program, which ensures that stories are coming straight from neighborhoods, not newsrooms. People are still interested in local news, she said.

“There's absolutely an appetite. We just need to ensure we are developing that kind of storytelling—that we are intentionally and intelligently distributing that storytelling across the platforms where these audiences are,” McMahon said.

And after years of turmoil, the L.A. Times has been working to reverse the “hollowing-out” of editors as a key quality control measure under new owner Patrick Soon-Shiong, Pearlstine said.

Despite problems with the information ecosystem, we are living through “an extraordinary era of investigative journalism,” Bay said. Might that gain traction as a way to restore trust in facts?

Several historical periods of Truth Decay that RAND research examined ended with the rise of investigative journalism, Rich explained. But today, “some of the forces working in the other direction are very, very strong,” he said.

“If people don't care, if they're not interested, if they would rather just be right, or rather hear something that makes them feel good, then it doesn't matter,” Kavanagh added. In past eras of Truth Decay, something catastrophic had to happen to remind people that facts truly do matter—something that flips the switch, she said. In the Roaring ‘20s, it was the Great Depression.

“The way I think about this project is, how do we flip that switch without the catastrophe?” Kavanagh said. “It feels a little bit like a race against time. How do we convince people before the catastrophe comes?”