Peace Hasn't Broken Out in Afghanistan 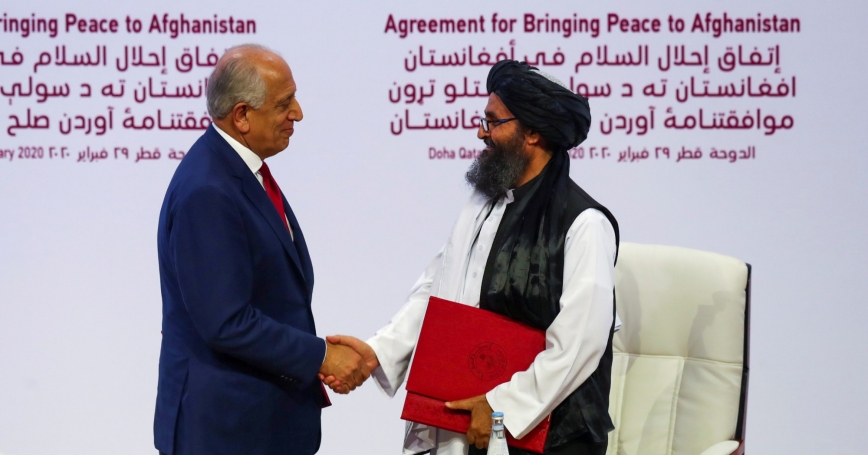 Mullah Abdul Ghani Baradar, the leader of the Taliban delegation, and Zalmay Khalilzad, U.S. envoy for peace in Afghanistan, shake hands after signing an agreement at a ceremony between members of Afghanistan's Taliban and the United States in Doha, Qatar, February 29, 2020

On February 29, the United States and the Taliban signed a preliminary peace deal aimed at ending nearly 19 years of war in Afghanistan. The agreement calls for the United States to gradually withdraw its troops from the country over the next 14 months and for the Taliban and the Afghan government (which was not a party to the deal) to open direct talks. The Taliban further promise in the deal to prevent terrorist groups, such as al Qaeda or the Islamic State (also known as ISIS), from operating in territory they control.

Much could go wrong rather quickly. The United States and the Taliban had agreed that a prisoner exchange should precede the negotiations between the Afghan government and the Taliban, but Afghan President Ashraf Ghani initially balked at the prospect. The talks did not begin on March 10, as specified in the U.S.–Taliban accord, but on that day Ghani did agree to release 1,500 Taliban fighters, in groups of 100 per day, beginning on March 14; once negotiations with the Taliban have begun, Ghani's decree stated, the Afghan government would release an additional 3,500 militants, in batches of 500 every two weeks. On March 11, the Taliban rejected Ghani's plan to stagger the prisoner release, arguing that talks cannot proceed until all 5,000 prisoners cited in its agreement with the United States have been released.…

James Dobbins is a senior fellow at the RAND Corporation. He served as special envoy for Afghanistan under Presidents Bush and Obama and with the U.S. delegation to the Vietnam peace talks in 1968.

This commentary originally appeared on Foreign Affairs on March 16, 2020. Commentary gives RAND researchers a platform to convey insights based on their professional expertise and often on their peer-reviewed research and analysis.