Truth Decay in the Coronavirus Moment: Q&A with Jennifer Kavanagh 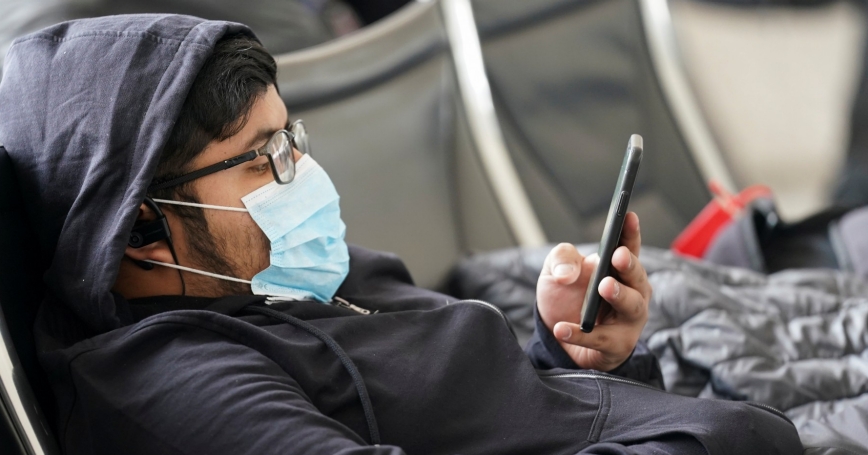 A man wearing a face mask looks at his phone at Dulles International Airport in Dulles, Virginia, March 12, 2020

There is so much information and misinformation out there about the novel coronavirus and COVID-19. Jennifer Kavanagh, who wrote the RAND book Truth Decay about the diminishing role that facts play in making important public policy decisions, calls the current situation a worst-case scenario.

She spoke with RAND's media relations director, Jeffrey Hiday. Following is an edited version of their conversation.

To what extent is Truth Decay at work here during the coronavirus pandemic?

This is exactly the worst-case scenario that I imagined when I was writing the book.

This is the type of environment in which false and misleading information thrives and spreads quickly. People are vulnerable. People are afraid. People don't know what to believe. Trust in basically every organization or position that we would turn to is pretty low. There's higher trust in the medical community than in, say, media or government, but it's still not all that high.

The combination of low trust and high volume of information coming from people who are not experts—but purport to be experts—creates the perfect storm for the average person. I am a well-informed person who knows where to go for good information, but even I am struggling to figure out what's true and what's not. So you can imagine how, how hard it would be for the average person who hasn't spent the past three years studying disinformation.

Today people were sending around this message that the president is about to invoke the Stafford Act and that this is going to lead to a two-week national quarantine. It was also rapidly debunked—but is this an example of what you're talking about?

Exactly. There are people who are trying to do their jobs by providing what they think is right and just messing up. But there are other actors intentionally contributing to the problem. We also have foreign actors who are actively spreading false information about the source of the virus—for example, saying it is a bioweapon developed by the U.S. military.

There are people who are trying to do their jobs by providing what they think is right and just messing up. But there are other actors intentionally contributing to the problem.

Plus we have an internal partisan conflict over which sources are accurate and disagreements about the level of severity and how concerned we should be.

And then you have the media. There are many actors in the media who are working really hard to get the facts out there. But the fact that the media is at its heart a business trying to make money, means outlets may keep fueling that fire of fear. The 24-hour-a-day coverage, the constant panicked headlines? That's not good for anyone. The online sources are no better: social media, Twitter, Facebook. These places can fill people with fear, false information, and confusion.

People always ask what ended Truth Decay in previous periods. Michael Rich and I did some historical comparisons. The answer seems to be some kind of serious incident: a catastrophe, the Great Depression, a war, a moment when people realized the consequences of making decisions based on what they want to be true or what they hope will be true and ignoring the actual evidence. Is COVID-19 enough to cause that snapback? I certainly hope so. But it's just something that we have to watch for now.

Or could the panic make distrust, and therefore Truth Decay, worse?

A period of economic and social dislocation is going to hurt trust in the near term, but there's an opportunity to build trust in the long run if it's handled properly. One of the reasons the Great Depression was so long and so severe is that in the early period, policymakers ignored the data they had and made decisions based on other things. That just made it worse and undermined trust even more. Learning from that example, the next couple of weeks are critical in terms of the decisions our policymakers make to try to rebuild public confidence.

Evidence and facts should drive all of our decisions every day. If we don't make our decisions that way, we can end up with serious and unwanted consequences.

They have to show they have the situation under control, but also that they use data to send a consistent message from all the players who are providing us information. That isn't what's happening right now.

Bottom line: Individuals have to realize that facts and data matter, that there are experts who have information, and that those experts should be looked to as sources of information about health. There has to be the change at the policy level as well as the community level. Evidence and facts should drive all of our decisions every day. If we don't make our decisions that way, we can end up with serious and unwanted consequences.

What's your own research agenda at the moment?

I'm interested in the effect on partisanship. Does this event bring people together, as we've seen in past national crises? Or will the health effects or economic impacts worsen the economic and social polarization that we already have in this country?

More generally, I'm interested in the effect at the global level in terms of things like trade conflict and border and travel restrictions. We saw some movement towards these restrictions even before the virus, driven by concerns over immigration and refugees. And so my question is: How do those things interact when this is over? Do those restrictions go away, or is this used as a reason to keep those restrictions and those border controls in place?