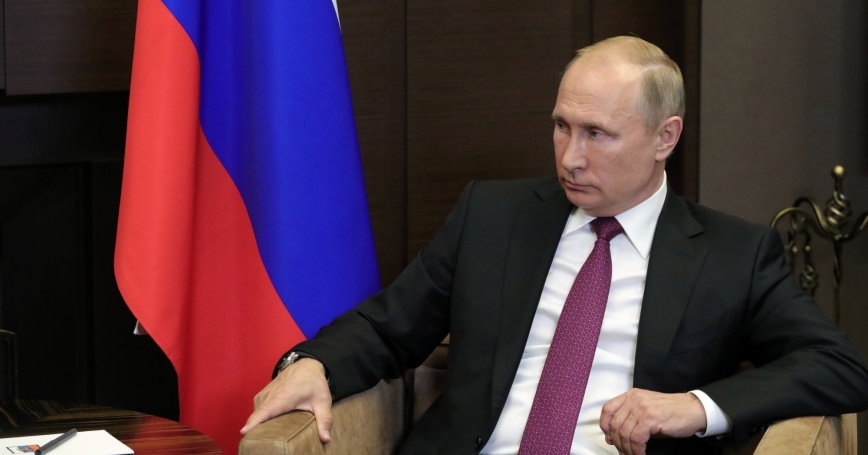 In fall 2015 Russia rescued Syria's beleaguered Assad regime by deploying airpower to help it beat back heavily armed insurgents, boosting Moscow's influence in the Middle East. Now with much of Syria lying in ruins, the Kremlin faces a different choice. It can back a revived United Nations–led peacemaking process, or see the West rebuff its appeals for large-scale aid.

While conflict in Syria persists, it is stalemated in the northwestern province of Idlib on the Turkish border. Rebel forces, including jihadist groups, cling to land despite ruthless onslaughts by Syrian and Iranian fighters backed by Russian air attacks. In the northeast, fighting has ebbed slightly, but U.S.-allied Kurdish Syrian Democratic Forces mistrust Turkish intentions. The Kurds gain leverage from guarding thousands of detained Islamic State fighters and families. And since the coronavirus pandemic began, the Islamic State has gone on the offensive in Syria, solidifying sanctuary in the central desert region West of the Euphrates River.

After mounting frustration, Moscow finally seems to be growing weary of its Syrian burden. Last month a prominent retired Russian diplomat wrote on an influential website that Syria was a “humanitarian disaster.” A “new military reality cannot be sustained without economic reconstruction and development of a political system that will truly rest on an inclusive approach and international consent.”

The Kremlin may be running out of patience with Assad, but is unlikely to abandon the regime. Syria is Russia's only major Mideast ally. Russia's outsized role there is key to its wider great power aims.

Moscow has shown some interest in a political solution. In 2016, Foreign Minister Sergei Lavrov and Secretary of State John Kerry announced several ceasefires, but they were violated and fell apart. Lavrov said Syria was a “quagmire” and the ”time is ripe for compromise.”

Political exertions have faltered for several reasons. One is the number of protagonists and differing priorities. While flirting with Russia and buying costly weapons, Turkey backs rebels aligned against Assad. Iran sees Syria as an ally and land bridge for arms flows to Hezbollah. U.S. sanctions may be causing Tehran to scale back in Syria, but Iran has too much at stake to abandon it.

Russia cannot have its cake in Syria and eat it too. The Kremlin ought not to expect Western aid while Russian aircraft pound targets in Syria with impunity and fortify air and naval bases aimed against NATO's presence in the eastern Mediterranean region.

If an impoverished and conflict-torn Syria continues to languish, it will be a constant reminder that Russia abetted in the country's destruction but was unable or unwilling to assist with recovery and rebuilding.

If an impoverished and conflict-torn Syria continues to languish, it will be a constant reminder that Russia abetted in the country's destruction but was unable or unwilling to assist with recovery and rebuilding.

Moscow may be myopic about Western aid. Two years ago, Russia's ambassador to the European Union called on it to spend “dozens of billions” of euros on reconstruction within months or otherwise it would “bear responsibility.”

Few donors will fill the void without a political solution and end to fighting. Western donors see the Assad regime as murderous, and aid projects need on-the-ground security.

The Syrian adventure is becoming less popular in Russia. A poll in spring 2019 showed that support fell from over half in August 2017 to less than half. A looming economic downturn in Russia owing to lower oil prices and the COVID outbreak could further diminish it.

Over time, political reconciliation in Syria might become more attractive to Moscow. Its role in achieving the historic 2015 Iran nuclear agreement shows the benefits of cooperating with other great powers to obtain a negotiated solution. Moscow's pressure on Tehran was key to the successful outcome, which enhanced Russia's global stature.

Similarly, Russian arm-twisting in Damascus would be essential for the UN-led peace process to bear fruit. This would mean using more leverage than the Kremlin was willing to spare during the Kerry-Lavrov negotiations. Also important could be Russian efforts to squeeze Iran to withdraw forces from Syria.

This is a tall order. It is more likely that the Kremlin will delay taking tough decisions unless and until renewed conflict or a new ISIS engulfs Syria and threatens Russia's position there.

Outsiders have little influence over the course Moscow takes. If Russia chooses wisely, the West, wealthy Gulf countries, and China could help by discouraging insurgencies in Syria and offering generous aid despite the constraints of post-COVID belt tightening. If Moscow procrastinates, the West may withhold assistance and continue cooperation with regional partners.

Colin P. Clarke is senior research fellow at The Soufan Center and an adjunct senior political scientist at the nonprofit, nonpartisan RAND Corporation. William Courtney is an adjunct senior fellow at RAND and was U.S. ambassador to Kazakhstan, Georgia, and a U.S.-Soviet commission to implement the Threshold Test Ban Treaty.

This commentary originally appeared on Newsweek on May 20, 2020. Commentary gives RAND researchers a platform to convey insights based on their professional expertise and often on their peer-reviewed research and analysis.